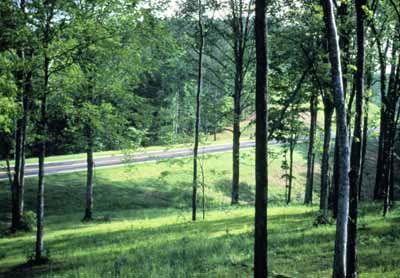 The Natchez Trace Parkway offers scenic vistas at every turn and a variety of habitats and wildlife, from blossoming flowers and trees to historical Native American earthen mounds.

Start in Natchez, Mississippi, cross the state to Alabama, and end in Nashville, Tennessee.

Natchez: The historic Mississippi River port of Natchez boasts as many as 14 palatial homes open to the public. One of the finest is Melrose, a national park site.

Mount Locust: Take a quick tour of Mount Locust. It is a rustic inn, or "stand," one of the first that provided food and shelter along this trail.

Sunken Trace: Here are three sections of the original road that show how the route was relocated to avoid mudholes.

Rocky Springs Site: A church and cemetery mark the site of the once prosperous town of Rocky Springs. In the 1790s, the rural community grew to more than 2,600 residents. But by 1920, the Civil War, yellow fever, the boll weevil, and erosion had devastated the town.

Jackson: Mississippi's state capital is an attractive river city with fine museums and parks. Of particular note is the Old Capitol.

Jeff Busby Site: The campground at Jeff Busby Site is named for Thomas Jefferson Busby, who introduced a bill in Congress that led to the creation of the Natchez Trace Parkway.

Tupelo National Battlefield: Fought on July 13-15, 1864, the battle resulted in a Union victory.

Freedom Hills Overlook: A steep quarter-mile trail climbs to the highest point on the parkway--an altitude of 800 feet.

Coon Dog Memorial Graveyard: An Alabama curiosity, more than 100 coon dogs have been buried here since 1937.

Buzzard Roost Spring: Levi Colbert, a Chickasaw Indian chief, operated an inn, or "stand," nearby. His story is told in exhibits.

Colbert Ferry Park: In the trace's heyday, George Colbert operated an inn and a river ferry here. There are facilities for swimming, fishing, and boating.

Rock Spring: A short trail follows Colbert Creek. It is one of numerous easy trails along the trace that offer motorists a chance to climb from behind the wheel.

McGlamery Stand: The nearby village still bears the name of this old stand.

Napier Mine: This open pit was worked during the 19th century.

Metal Ford: Travelers crossed the Buffalo River here; an ironworks and McLish's Stand were nearby.

Old Trace: Here the Trace marked the boundaries of the Chickasaw lands ceded to the United States in 1805 and 1816.

Sheboss Place: This is the site of one of the stands that once served travelers on the trace.

Jackson Falls: Named for Andrew Jackson, the falls are on the intermittent Jackson Branch that empties into Duck River.

Tennessee Valley Divide: When Tennessee was admitted to the Union in 1796, this watershed was the boundary between the United States and the Chickasaw nation.

Garrison Creek: Named for a nearby 1801-1802 U.S. Army post, this area is a trailhead for horseback riders and hikers.

The path once taken by hunters and explorers now takes drivers down the Natchez Trace Parkway, exposing visitors to the rich cultural heritage of three states, bringing to life the history of a region.