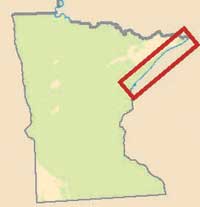 Minnesota's North Shore Scenic Drive runs along Lake Superior, the world's largest freshwater lake. It is 154 miles of scenic beauty and natural wonders. No other scenic drive in the Midwest can offer what this one does: an inland sea, a mountain backdrop, and an unspoiled wilderness.

It is believed that the first people to settle the North Shore region arrived about 10,000 years ago. These Native Americans entered the region during the final retreat of the Wisconsin glaciation.

The first Europeans, French explorers, and fur traders reached Lake Superior country around A.D. 1620. By 1780, the Europeans had established fur-trading posts at the mouth of the St. Louis River and at Grand Portage.

Lumber barons moved into the region between 1890 and 1910, and millions of feet of red and white pine were cut from the hills along the North Shore. Temporary railroads transported the logs to the shore, where they were shipped to sawmills in Duluth, Minnesota, and Superior, Bayfield, and Ashland, Wisconsin. Today, many of those old railroad grades are still visible, and some of the trails still follow these grades.

Miners digging for high-grade ore from the Iron Ranges in northeastern Minnesota established shipping ports such as Two Harbors in 1884. With the rise of taconite in the 1950s, they developed shipping ports at Silver Bay and Taconite Harbors along Superior's shores.

These harbors are still in use, and visitors driving the North Shore Scenic Drive may see large 1,000-foot-long ore carriers being loaded or resting close to shore. The shipping history and Lake Superior's unpredictable storms have left the lake bottom dotted with shipwrecks, which now provide popular scuba diving destinations.

The North Shore Scenic Drive follows the shoreline of the world's largest freshwater lake, Lake Superior, which contains 10 percent of the world's freshwater supply. This byway is a marvelous road to travel, never running too far from the lakeside and at times opening onto splendid views down the bluffs and over the water.

The Sawtooth Mountains, which frame the North Shore, are remnants of ancient volcanoes. The glaciers that descended from Canada 25,000 years ago scoured the volcanic rock into its current configuration. Cascading rivers coming down from the highlands into Lake Superior continue to reshape the landscape today.

Northeastern Minnesota is the only part of the United States where the expansive northern boreal forests dip into the lower 48 states. The Lake Superior Highlands have been identified to be of great importance for biodiversity protection by the Minnesota Natural Heritage Program and the Nature Conservancy.

Northeastern Minnesota is recognized as one of the better areas in the nation for viewing rare birds. Diversity of habitat, geography, and proximity to Lake Superior combine to attract a variety of bird life that draws bird-watchers from around the world. In the fall, hawks migrating along the shore of Lake Superior number in the tens of thousands. Winter is an excellent time to see northern owls, woodpeckers, finches, and unusual water birds.

The North Shore is one of the primary destinations for recreational activities in the Midwest, with facilities for outdoor activities including camping, hiking, biking, skiing, snowmobiling, fishing, and canoeing. The impressive natural beauty of the North Shore has been an attraction since the completion of Highway 61 in the early 1900s.

View Enlarged Image This map of the North Shore Scenic Drive will take you up the beautiful Lake Superior coastline.

When you're ready for a break from outdoor excitement, try touring some of the classic historical sites in the area. The Minnesota Historical Society takes care of the Split Rock Lighthouse and provides interpretive programs. The Lake County Historical Museum, which is housed in the old Duluth & Iron Range Railway Depot, contains excellent exhibits on the region's history. In Two Harbors, you can tour an operating lighthouse and the Edna G., which was the last steam tug to work the Great Lakes.

Time to Allow: One day

Considerations: The weather along the North Shore Scenic Drive can be quite cool at times, so a jacket is recommended even in summer. At times in winter, snowfall is heavy. However, because homes and businesses exist along the route, the plowing of this road is a priority.