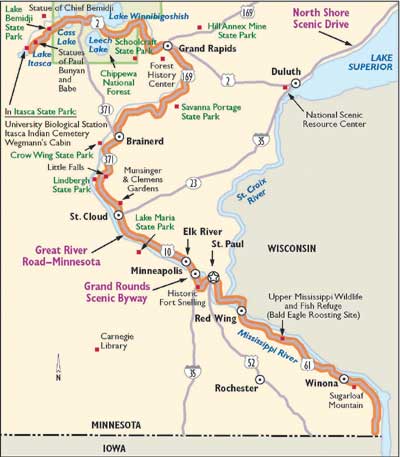 Use this map of the Great River Road to guide you to some of Minnesota's most beautiful sights and most significant historical locations.

When Henry Rowe Schoolcraft identified the true source of the Mississippi as the crystal-clear waters that flow from Lake Itasca, the final boundaries of the Louisiana Purchase were set. The Mississippi River, however, was important to Native Americans centuries before the Europeans arrived. In fact, the name Mississippi was an Algonquin name that, when applied to rivers, meant Great River (hence the name Great River Road).

During the 1820s and 1830s, Fort Snelling and Grand Portage (on Lake Superior) were the focal points of Euro-American activity in the region. Strategically located at the confluence of the Mississippi and Minnesota Rivers, Fort Snelling served as the first U.S. military outpost in the area.

The Great River Road traces the river through the Chippewa National Forest, created by Congress in 1902. Although originally only small areas of pines were preserved, now more than 600,000 acres of land are managed by the National Forest Service. In this forest is historic Sugar Point on Leech Lake, another of the Mississippi River reservoirs.

You can also visit Battleground State Forest, the site of the last recorded American Indian battle with the U.S. government, and Federal Dam, one of six dams constructed in the area between 1884 and 1912 to stabilize water levels on the Mississippi downstream. The legacies of the great pine forests along the Mississippi live in the majestic trees that remain.

In Bemidji, the most recognizable landmark is the 1937 colossal statues of Paul Bunyan and Babe the Blue Ox, located on the shore of Lake Bemidji. The legend of the giant lumberjack illustrates the importance of the lumber industry for many northern Minnesota towns.

Due to its closeness to the river, St. Paul became a transportation hub for opening up the upper Midwest. It also became Minnesota's state capital, and Minneapolis became the nation's main flour-milling district.

St. Anthony Falls in Minneapolis and the locks and dams provide testimony to people's success at harnessing the power of the river to create a thriving urban center. Flour, beer, textiles, and lumber were produced and successfully transported to the nation and the world through the lock-and-dam system that begins here.

In the early 1900s through the 1930s, the Cuyuna Iron Range produced more than 100 million tons of ore that was used to build the U.S. military machines of the great world wars. In Crosby, travelers visit the Croft Mine Historical Park; this mine operated between 1916 and 1934 and produced the richest ore found on the Cuyuna Range, with a composition of 55 percent iron.

In Little Falls, the Great River Road follows Lindbergh Drive to the boyhood home of Charles Lindbergh, pilot of the first solo flight across the Atlantic Ocean. The evolution of the United States can be traced along the Great River Road on the Ox Cart Trail, still visible though Schoolcraft and Crow Wing State Parks.

Across the river from the Great River Road, Elk River's most noted resident, Oliver H. Kelley, founded the Patrons of Husbandry (popularly known as the Grange), a group that evolved into the Democratic Farmer Laborer, or DFL, party. 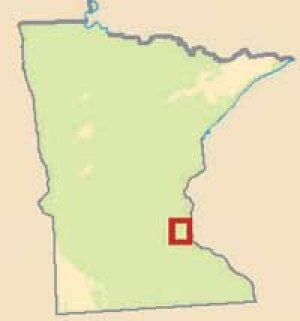