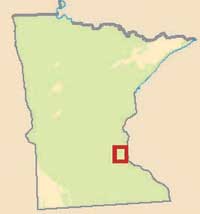 The system includes the Chain of Lakes, Lake Nokomis, Lake Hiawatha, and the Mississippi River, as well as Minnehaha Creek. Parks, recreation centers, historic districts, and lakes are all defining characteristics of the Grand Rounds Scenic Byway. Depending on the season, you interact with a landscape encompassing combinations of natural areas, historical features, and cultural amenities.

The Grand Rounds Scenic Byway has been the creme de la creme of urban byways for more than a century, being the longest continuous system of public urban parkways and providing motorists with access to an unprecedented combination of intrinsic qualities of the highest caliber.

Recent archaeological digs in the old milling district of Minneapolis have revealed artifacts from the time when Minneapolis was a milling capital. Visitors can explore the way life used to be in Minneapolis at the newly constructed Mill Ruins Park. This park is a restoration of original walls, canals, and buildings of the West Side Milling District.

Another of the archaeological features along the Grand Rounds Scenic Byway is the Winchell Trail. Located on the Mississippi River, this trail preserves an original Native American trail that linked two celebration sites.

An urbanized culture originating in the early 1800s is what visitors to the Grand Rounds Scenic Byway will experience. However, amid this urban culture is a prominent appreciation for nature and the arts. This can be seen in the beautiful parkways, lakes, and parks on the Grand Rounds. Hiawatha Avenue and Minnehaha Park are examples of remnants of a culture that held a great respect for the waters of Minnesota.

Architectural styles ranging from fine to functional exist all along the byway. Unique bridges hold views to the old milling district of the city, where settlers made a living working in the sawmills. Modern art can be found in the uptown area of the byway as well as in the lakeside areas. This art is one contribution of a culture that has evolved from all the previous inhabitants of the Minneapolis area.

The Grand Rounds Scenic Byway is one of the nation's longest and oldest connected parkway systems owned entirely by an independent park board. This road has many historical qualities.

For example, the Stone Arch Bridge found along the byway is a National Civil Engineering Historical Landmark Site. Minnehaha Falls, also found along the byway, is immortalized in Longfellow's epic poem "The Song of Hiawatha." Master crafting is a significant element of the beauty of the Grand Rounds Scenic Byway, while other forms of architecture are being brought to the surface again. The St. Anthony Falls Heritage Trail offers a look at Minneapolis from a perspective that explores the many highlights in the city's history.

With the Mississippi running through it and lakes scattered all around it, it's no wonder the Grand Rounds is a scenic attraction for nature lovers. In very few other urban places in the world is nature so artfully integrated with the city.

St. Anthony Falls is the only natural waterfall and gorge along the entire 2,350-mile course of the Mississippi River; Minnehaha Park contains one of the most enchanting waterfalls in the nation; and the Chain of Lakes is a place on the byway to enjoy the lakeshore or sail a boat onto the water. All in all, the Grand Rounds Scenic Byway connects nine lakes, three streams, two waterfalls, the Mississippi River, and surrounding nature to travelers.

At the Eloise Butler Wildflower Garden, you will find hundreds of plants and flowers native to Minnesota. The garden has expanded into a preserve that is also home to many birds. A rose garden is located on Lake Harriet Parkway, while at Minnehaha Park, the Pergola Garden displays native wildflowers. Theodore Wirth Park includes a section known as Quaking Bog. This five-acre bog is covered in moss and tamarack trees. Exploring these parks and gardens will give you a taste of the best of nature.

Unlike many of Minnesota's byways, the Grand Rounds Scenic Byway will take you to some of the state's urban attractions, focusing on Minneapolis, as this map shows.

With such widely varied attractions in one city, you'll find many places to see and different activities to do at each of those places. Outdoor recreation is not out of reach, while touring historical buildings and parks is a possibility as well.

Sailboats and canoes are seen every day on the Chain of Lakes, while bikers and hikers have miles of roads to enjoy. The Grand Rounds is one of the nation's first park systems to create separated walking and biking paths. The byway is also host to many national running events; for example, the Twin Cities Marathon on the Grand Rounds was named "the Most Beautiful Urban Marathon in the Country."

The scenes of the Grand Rounds vary greatly, but they are the city of Minneapolis at its finest. The architecturally diverse Minneapolis skyline is visible from nearly every portion of the Grand Rounds Scenic Byway. Watch the buildings sparkle in the daylight or see them silhouetted by a Minnesota sunset. The familiar view of the Stone Arch Bridge leads travelers to the historic district of Minneapolis with brick streets and flour mills. The sight of Minnehaha Falls is also a view linked directly to the ideals that embody Minneapolis.

The Grand Rounds Scenic Byway also includes outdoor sculptures, fountains, and public gardens that have been created by world-renowned artists. Where else can you find such a creative rendition of a giant cherry captured by an equally enormous spoon? Fountains and sculptures of Minneapolis are the jewels of the city that set it apart from other urban sections of the country.

Cities it runs through: Minneapolis

Considerations: With only a few exceptions, the Grand Rounds Scenic Byway is generally above local flood plains. During the winter, in addition to the roadway surfaces, a single paved trail is plowed throughout the system for shared use by pedestrians and cyclists. Truck traffic is prohibited from using all but several short segments of the byway. 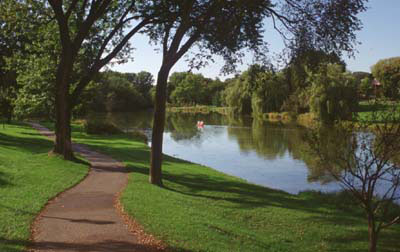 Drive the Grand Rounds Scenic Byway and you will see virtually all of the following sites.

Theodore Wirth Park: Beginning at the northeastern terminus of the Grand Rounds on Highway 35W, travel west and follow the byway as it winds around to Theodore Wirth Park. This park is well worth the visit and includes the Eloise Butler Wildflower Garden, with its spectacular display of wildflowers and other flowering plants.

Loring Park/Sculpture Garden: Returning to the byway, follow it around Cedar Lake to Lake Calhoun. Here, turn northeast and travel around Lake of the Isles to Loring Park. Loring Park is home to the well-known Sculpture Garden. With its impressive display of sculpture and fanciful artwork, the Sculpture Garden is one of the highlights of the Grand Rounds.

Minnehaha Park : Continue following the byway as it turns and travels east to Minnehaha Park, where you may view the falls, and Lake Hiawatha.

: From here, follow the byway north to its terminus at Nicollet Island and Boom Island. Both are interesting places to visit in downtown Minneapolis.

Nowhere else does the bustle of the city team up so well with nature's best as it does on Minnesota's Grand Rounds Scenic Byway.