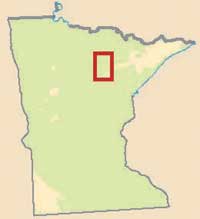 Minnesota’s Edge of the Wilderness drive celebrates northern hospitality, hometown pride, and the treasures of our natural heritage. Minnesota, midway between America's east and west coasts, is home to 12,000 lakes. It is filled with beautiful country and all the pleasures of the four seasons.

The Edge of the Wilderness is the rustic slice of this great state, with more than 1,000 lakes and one mighty river, the Mississippi, all in landscapes of remarkable natural beauty. There are still more trees than people here, offering classic North Woods seclusion.

The Edge of the Wilderness begins in Grand Rapids with meadows and lakes and winds through mixed hardwoods and stands of conifers and aspens in the Chippewa National Forest. Rounding bends and cresting hills, you will find breathtaking views that, during the fall, are ablaze with the brilliant red of sugar maples, the glowing gold of aspen and birch, and the deep bronze of oak.

The Edge of the Wilderness route offers some of Minnesota's most popular sporting and resorting opportunities in its unique environment of clear lakes, vast shorelines, and hills blanketed in hardwood forests and northern pines. Recreation seekers will find hiking, camping, fishing, cross-country skiing, and snowmobiling within the byway corridor. You will find that you are really living on the "edge."

Historical Qualities of the Edge of the Wilderness

At the height of the Great Depression, President Franklin D. Roosevelt formed the Civilian Conservation Corps (CCC) to provide jobs and restore the environment. CCC camp crews often were called the Tree Army. They were responsible for planting more than two billion trees across the United States in nine years. Other tasks included road construction; site preparation; surveys of lakes, wildlife, and streams; and even rodent control.

The Day Lake CCC Camp was one of 20 camps established in Minnesota during the Great Depression. Day Lake was the only camp in the forest to host African-Americans in the segregated CCC program, and was one of only six that lasted past the CCC era; it became one of four camps in the Chippewa National Forest that housed German prisoners of war during World War II (1943-1945).

Today, on the west side of Highway 38 are the remains of a concrete shower. East of the highway and up the hill are the outside stone stairway and a chimney that are remnants of the camp mess hall. Many old camp foundations and sites are also visible. After its closing, much of the Day Lake CCC Camp was replanted with red pine, hiding many of the signs of its history.

Natural Qualities of the Edge of the Wilderness

Aspen, birch, pines, balsam fir, and maples blanket the rolling uplands of the forest along the Edge of the Wilderness. In between these trees, water is abundant, with more than 1,000 lakes, 920 miles of rivers and streams, and 150,000 acres of wetlands.

The forest landscape is a reminder of the glaciers that covered northern Minnesota some 10,000 years ago. From the silent flutter of butterflies to the noisy squeal of wood ducks, and from the graceful turn of deer to the busy work of raccoons and beavers, this place of peace is bustling with activity. Many travelers try to identify the laugh of the loon, the honk of the goose, and the chorus of sparrows, red-winged blackbirds, goldfinches, and crickets.

Look skyward to glimpse an eagle, turkey vulture, or osprey. There are more bald eagles on the Edge of the Wilderness than any other part of the lower 48 states. An eagle nest may measure up to ten feet in diameter and weigh 4,000 pounds.

Minnesota has the greatest number of timber wolves in the lower 48 states as well. (They are considered a threatened but not an endangered species in Minnesota.) Less often seen but still present in the area are coyotes, bears, and moose. White-tail deer, ruffed grouse, and waterfowl offer good hunting and wildlife viewing opportunities as well.

During the autumn and spring, woody white stands of birch lace the forest floor along the Edge of the Wilderness. If you are a longtime resident or resort vacationer, you may no longer notice this phenomenon. But to newcomers, the question arises, "What happened to make all these trees fall to the ground?"

Paper birch trees, which live only 40 to 80 years, are found throughout Minnesota's northern woodlands. As late as the 1900s, Chippewa nations in the north built birch bark canoes. They also used birch to create torches. Early settlers prepared birch for railroad ties for the trains that edged northward.

In today's economy, birch is used as lumber and firewood and for veneers. Birch also contributes nutrients to the forest floor and has served as food for various insects. Stands of birch often begin to grow after a fire, windstorm, or timber harvest. Another reason so many birch trees lay on the ground is that birch loses out to the taller-growing aspen as both sun-loving species compete. Along the Highway 38 corridor, you can see how birch trees topple due to competition from other trees, disease, and insects, as well as from northern Minnesota's light soils.

Recreational Qualities of the Edge of the Wilderness

Following World War II, northern Minnesota's tourist and resort industry grew rapidly. Itasca County had a peak of about 300 resorts in the 1940s and 1950s. Today, there are approximately 100 resorts and vacation sites in the area, many vacationers returning year after year.

North Star Lake -- at more than three miles long and about 1/2 mile wide -- is considered one of the best fishing and recreational lakes in the area. It is representative of many of the lakes on the Edge of the Wilderness, with its scenic beauty, islands and bays, clear waters, and recreational offerings. The still-visible remnants of the railroad trestle provide good habitat for the lake's many fish. The lake is 90 feet deep and is managed for muskie. Visitors also catch walleye (the state fish of Minnesota), northern pike, largemouth bass, smallmouth bass, bluegills, and crappies.

This map of Minnesota's Edge of the Wilderness will take you to countless opportunities for recreation in gorgeous natural settings.

With a wingspan of more than six feet, keen vision, and white head and tail feathers, the bald eagle is truly a magnificent bird. People often make a special trip to the Chippewa National Forest just to observe bald eagles. Spending time along the shorelines of the forest's larger lakes is the best way to treat yourself to the sight of an eagle in flight.

Large, fertile lakes; towering red and white pines; and remote areas provide ideal nesting and feeding habitat for bald eagles. Nesting birds return in late February and early March, though a few birds spend the entire winter in the forest. Eggs are laid in early April, and the young eagles leave their lofty nests in mid-July. Eagles occupy their breeding areas until the lakes freeze over.

The best opportunity for viewing bald eagles is from a boat; in fact, one of the best opportunities to see eagles is to canoe down the Mississippi River. You can search the lakeshore with binoculars to spot eagles that are eating fish on the beaches. These birds of prey often perch in trees found around the larger lakes, such as Bowstring. The Bigfork River is also a favorite eagle area.

However, if you do not have a boat, you can simply find an area along the beach with a good panoramic view of the lake. Campgrounds, picnic areas, and boat landings are good places to visit.

Edge of the Wilderness Information

Considerations: The best time to drive the Edge of the Wilderness is during the fall foliage season (end of September, beginning of October). High season includes July and August. Highway 38 courses up and down and curves often -- that's part of its charm. Locals named it Highway Loop-de-Loop in the early days. As you drive the byway, be aware of the lower speed limits, other traffic on the highway, and weather conditions. This is a working roadway, with trucks carrying logs and other local products. 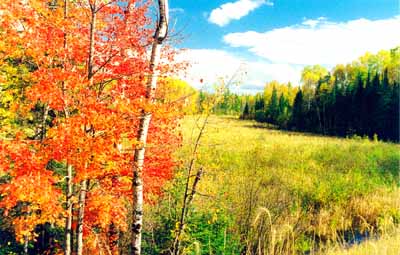