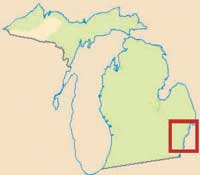 The Motor City put the world on wheels, so welcome to Detroit's main drag: Woodward Avenue. Stretching out from the base of Detroit at the Detroit River, this scenic drive follows the pathway of growth from the heart of the city.

Lined with history, cultural institutions, and beautiful architecture, Woodward Avenue travels through downtown Detroit, the Boston Edison neighborhood, past Highland Park, the Detroit Zoo, the delightful city of Birmingham, the Cranbrook Educational Community in Bloomfield Hills, and into the city of Pontiac. Nearly every mile of this byway has historical sites that have shaped the industrial life of our nation.

Woodward Avenue includes both landmarks of the past and monuments to the future. You can find one of the largest public libraries in the nation as well as one of the five largest art museums.

From the Freedom Fireworks Display on the Detroit River to the annual Thanksgiving Day Parade to the phenomenal Woodward Dream Cruise, it's as if this street were meant to blend memories with the future.

Much of the culture in southeast Michigan stems from the development of the automobile. When visiting museums such as the Detroit Institute of Arts (DIA) and the Detroit Historical Museum, the impact of the automobile is evident. Your first steps into the DIA will take you to huge two-story murals painted by Diego Rivera that depict life on the assembly line.

The Woodward corridor is one of six areas comprising the Automobile National Heritage Area (under the jurisdiction of the National Park Service).Woodward Avenue is home to other major cultural institutions as well, including the Cranbrook Educational Community, Orchestra Hall, and the Detroit Public Library, which is among the ten largest libraries in the nation.

The region's culture can also be defined by its faith. Traveling from Detroit to Pontiac, you pass by more than 50 churches, many of which are on national or state historic registers. Prominent among these is the National Shrine of the Little Flower in Royal Oak.

Detroit is known internationally as the Motor City because of its role in the development of the automobile. This is the birthplace of the assembly line (Ford's 1913 Model T Plant on Woodward), a major technological innovation that made the automobile affordable to most families. The assembly line had a major impact on American society and in the development of urban areas.

The first people who may come to mind when talking about the automobile industry are the Fords, Chryslers, and Durants. But you should also remember the thousands of nameless auto workers who established the industry and carry on to this day -- the United Automobile Workers (UAW).

Henry Ford's five-dollar-a-day wage attracted thousands to his factories, but the working conditions were brutal -- this was true of all auto plants. In the late 1930s, the UAW was born and, with fair wages and better working conditions, auto workers and their families now enjoy a decent quality of life. Some of the former homes of early auto barons are located in historic neighborhoods, such as the Boston Edison Historic District.

The city of Detroit and neighboring communities have worked hard and invested a lot of energy to develop safe, fun activities that the whole family can enjoy.

Some of the highlights found along Woodward Avenue include watching animals at the world-class Detroit Zoo, attending the Woodward Dream Cruise (where thousands from around the world gather to view classic cars from around the country), touring historic homes and mansions, making maple syrup at the festival in Cranbrook, standing on the sidewalk during the famous America's Thanksgiving Day Parade, or watching the largest fireworks display in the nation explode over the shimmering Detroit River.

View Enlarged Image Use this map of Woodward Avenue to explore the highlights of downtown Detroit and southeast Michigan.

States it runs through: Michigan

Considerations: The busiest months are August because of the Woodward Dream Cruise and November because of America's Thanksgiving Day Parade. Because Woodward Avenue passes through downtown Detroit, avoid driving it during rush hour. 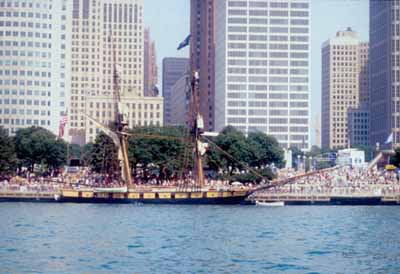