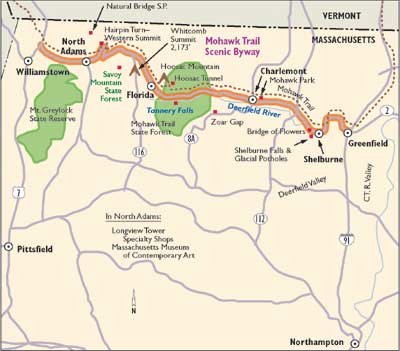 Follow this map to see the points of interest along Mohawk Trail.

The hilliest section of Route 2 and the country's first scenic "auto route," the Mohawk Trail runs through the Berkshire Hills in northwestern Massachusetts and offers a satisfying excursion.

In 1914 the most mountainous miles of the Mohawk Trail were graded and specifically dedicated to auto touring. This stretch begins in the small city of North Adams and zigzags its way up the Hairpin Turn to the western summit of Hoosac Mountain. It runs eastward along heavily wooded ridges, then drops into the long-settled Deerfield Valley, and finally descends into the broad Connecticut River Valley.

In 1914 the fastest way from North Adams to Boston was by rail, via the 4.5 mile Hoosac Tunnel, itself considered a wonder when it opened in 1875. By 1914, however, cars were becoming affordable and folks were eager to break away from the dictates of the rails, to stop and go where they wished.

The challenge of driving over rather than riding through Hoosac Mountain drew families -- driving their first cars -- from throughout the Northeast. Recognized as a destination in its own right from the 1920s through the 1950s, this initial stretch of the Mohawk Trail sprouted tea shops and motor courts, trading posts and campgrounds, both private and state.

In the 1960s vacation patterns and highway routes changed. The 1965 opening of the Massachusetts Turnpike (Route 90) knocked an hour off the time it takes to cross the state and further back-roaded Route 2. The Mohawk Trail's vintage lookout towers, motor courts, tearooms, and trading posts faded.

For a decade or so now the tourist tide has once more been turning. White-water rafters on the Deerfield River are filling the old roadside lodging places, and bed-and-breakfasts draw travelers into the surrounding hills.

The village of Shelburne Falls, long known for its Bridge of Flowers, has become a showcase for the area's many craftspeople and chefs. Once more the Mohawk Trail is becoming a destination, this time for travelers who appreciate its layerings of history as well as its natural beauty.

The Mohawk Trail, travelers can take it slow and enjoy the view, or you can spend days exploring its side roads and villages, hiking its open public lands.

Considerations: Mid-October through early May conditions may be treacherous due to ice and snow, but the road never closes. 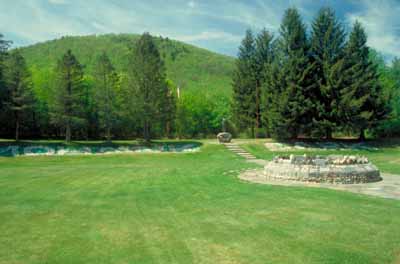 ©Byways.org Many serene parks are accessible from the Mohawk Trail.

On your driving tour of Mohawk Trail, start in North Adams and end in Greenfield. This will ensure that you get the most out of the byway.

Massachusetts Museum of Contemporary Art: North Adams boomed into existence with the construction of the Hoosac Tunnel in the late 19th century, and its mills prospered until the 1970s, a period when much of its fine Victorian-era downtown was razed in the name of urban renewal. Thanks to the Massachusetts Museum of Contemporary Art, which now fills four large former mill buildings with changing exhibits and performances, the state's smallest city once more offers quality lodging and dining.

Longview Tower Specialty Shops: The Longview Tower Specialty Shops were opened in 1923 by two sisters. The five-story observation tower was rebuilt of steel in 1952 and is worth the climb, commanding a three-state view of hills in Vermont and New Hampshire as well as Massachusetts. You can also see a panorama of the Connecticut River with its flanking farms and the town of Greenfield from the tower.

Hairpin Turn-Western Summit: Cars from the 1920s frequently required a stop to cool their radiators at the top of a steep climb, such as the ascent of some 2,000 feet in altitude in the couple miles between North Adams and the Western Summit of Hoosac Mountain. The Wigwam and Western Summit Gift Shop at the top of the Hairpin Turn no longer has its wooden viewing tower but retains its '20s aura. This and a matching tearoom at the opposite end of the trail were built by the same two enterprising sisters who opened the Longview Towers Specialty Shops.

Whitcomb Summit: The highest point on the route (2,173 feet) is marked by a steel version of a wooden tower placed here in 1915. It commands an amazing view of waves of hills. The cottages and café here date from the 1920s.

Tannery Falls: Be forewarned that this turnoff is unmarked. Just east of the bridge that marks the town line between Savoy and Florida, turn south on Black Brook Road and then on Tannery Road into the Savoy Mountain State Forest. From the parking area a trail follows a narrow stream steeply down to the bottom of a glorious cascade.

Mohawk Trail State Forest: This is a 6,457-acre forest with 56 campsites and six log cabins. You can swim in the river or hike one of the extensive trails.

Zoar Gap: Zoar Gap is a dramatic gorge best viewed from a whitewater raft on the Deerfield River. Zoar Outdoor, based in a 1750s house on Route 2 in Charlemont, pioneered rafting to take advantage of timed hydro releases on the Deerfield.

Charlemont: Here the Deerfield River slows, widens, and turns east, flanked by broad fields that have been farmed, judging from the vintage of the farmhouses, since the 1770s. The hospitable Charlemont Inn has been feeding and housing travelers since the 18th century. The Bissell Covered Bridge spans Mill Brook just north of Route 2, and the white-steepled Federated Church is known for the quality of its acoustics and of the Mohawk Trail Concerts held here in July and August. Also in Charlemont is the Indian Plaza Gift Shop, the site of periodic powwows.

Mohawk Park: Mohawk Park in West Charlemont features a bronze statue of a Native American placed here by the Improved Order of Red Men in 1932.The Mohawks seem to have been selected as the namesakes of this trail primarily because people had heard of them. It's true that warrior members of this Upstate New York nation occasionally came this way to raid settlements, but it's likely that the path here was blazed by local nations such as the Pocumtucks.

Shelburne: The American Indian trading posts along the Mohawk Trail are historic and have survived only through longtime family ownership. In Shelburne look for the Big Indian Shop, so named for its 28-foot-tall American Indian guarding the door, and for the Mohawk Trading Post with its fiberglass buffalo outside and authentic wares within.

Shelburne Falls: Two bridges, one a pedestrian walkway planted with trees and flowers, span the Deerfield River linking two towns to create a lively village composed of shops and restaurants on either bank. The falls themselves once powered the picturesque Lamson and Goodnow Cutlery Mill, which features an outlet store, and the Glacial Potholes at their base are a multicolored and unusually shaped phenomena. The Bridge of Flowers, a former trolley bridge, has been tended by local garden clubs as a war memorial since 1919, and a restored trolley seasonally operates on a piece of track up by the depot. The village is known for its quality crafts cooperatives.