Maryland is home to 170 miles of the Historic National Road. Along the way, visitors can hike, bike or picnic in state parks and forests. They can also stop at countless museums, attractions, restaurants and lodging sites, some of which existed in the road's earliest days.

Many layers of urbanization have modified this historic route, but the diligent traveler still may follow the old Historic National Pike through the streets of Baltimore westward into the historic Maryland countryside. Today, with the construction of new roads, many historic towns and sites originally connected to the Historic National Pike lure modern travelers with rugged charm, including a host of antique shops, specialty shops, and unique restaurants.

In the late 18th century, as the population of the United States began to grow, President Thomas Jefferson encouraged the development of a transportation infrastructure that would connect the Eastern Seaboard with points farther inland. The construction of the National Road westward from Cumberland was the first such investment by the federal government.

From the shores of the Chesapeake Bay to the majestic Negro Mountain, the Historic National Road offers many natural wonders. Many state parks along the byway offer quiet breaks in the long drive. As the byway continues into western Maryland, it passes through many mountain peaks. Before the byway continues into Pennsylvania, it journeys through the city of Cumberland, which is nestled in a small mountain valley. Here, mountains tower 1,000 feet around the city.

The most magnificent feature to note in the byway is the Narrows, located northwest of Cumberland. The Narrows is an unusual geologic formation near Cumberland that provides a pass through the Allegheny Mountains. Wills Creek runs north and south through the Narrows, creating the narrow gorge through Wills Mountain.

Perhaps the most popular destination in all of Maryland is Baltimore's Inner Harbor, where you'll find outdoor performances, numerous eateries, the Baltimore National Aquarium and Marine Mammal Pavilion, the Maryland Science Center and Davis Planetarium, the Pier 6 Concert Pavilion, historic ships, Harborplace shops, and much more.

If you love outdoor activity, this byway features fantastic biking, boating, hiking, and rock climbing. You can find numerous places to fish as well as hunt deer, turkey, grouse, squirrel, rabbit, quail, and waterfowl. If you like to view animals but not necessarily hunt them, you can also find excellent bird-watching areas.

Considerations: You may want to plan stops for gas and food because this is a long byway. You'll also find numerous historic sites and museums to visit, so you may wish to plan additional drive time. 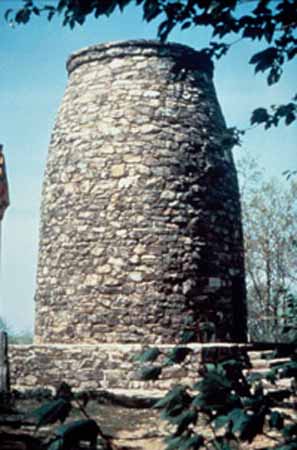 From the picturesque shores of the Chesapeake Bay to the towering mountains surrounding Cumberland, Historic National Road in Maryland delivers breathtaking scenery every step of the way. You will see early stone bridges, Pennsylvania-German back barns with limestone-faced gable ends, and the last tollbooth on the left on the Maryland part of the Historic National Road.

Views are quite beautiful approaching South Mountain, from the top of the maountain (washington Monument State Park), and around Middletown. Washington Monument State Park on a South Mountain contains a spectacular overlook located aproximately one mile from the byway, from which the surrounding Middletown Valley can be admired. The Appalacian Trail crosses by this landmark.

Start your must-see tour in Baltimore at the B & O Railroad Museum.

B & O Railroad Museum: The city of Baltimore was instrumental in the birth of passenger train service in 1830, an event commemorated by the B & O Railroad Museum. The museum is a storehouse of railroading lore, boasting a large collection of historic steam engines and restored passenger and freight cars.

Fort McHenry National Monument and Historic Shrine: When the wind is calm, U.S. park rangers fly a replica of the giant "Old Glory" that Francis Scott Key saw when he was inspired to write what became America's national anthem. Exhibits at the massive, star-shaped fort overlooking Baltimore's harbor tell the story of that fateful dawn in 1814, when the fort's defenders survived an intense British bombardment in the War of 1812.

National Aquarium: Two distinctive glass pyramids overlooking Baltimore's harbor house the National Aquarium. As you enter, the stingrays immediately capture your attention. From the pool, you ascend five levels. Level Two traces Maryland's waterways from the mountains to the sea. Level five is a re-created South American rain forest. Most spectacular of all is the descent through a giant circular tank, where sharks slip silently past.

New Market: Step back in time in the historic village of New Market, which claims the title of "Antiques Capital of Maryland." Most of the old brick and wood-frame structures along a six-block stretch of Main Street display antiques of all kinds -- from inexpensive knickknacks to costly French furniture pieces. Small alleyways lead to more shops and to cornfields and pretty country views.

National Museum of Civil War Medicine: In the heart of Frederick, the National Museum of Civil War Medicine tells the story of how medical treatment improved radically in the four years of the war as both sides coped with a flood of ill and wounded soldiers. The use of ambulances and the technique of embalming both emerged from the conflict, exhibits explain. The town of Frederick received many of the Union casualties from the nearby Battle of Antietam.

Antietam National Battlefield: Fought on September 17, 1862, as Confederate General Robert E. Lee attempted to invade the North, the Battle of Antietam has entered the history books as the single bloodiest day of the Civil War. More than 23,000 men were killed or wounded -- partly as a result of the blunders of their commanders. A 26-minute orientation movie outlines the battle and its aftermath, and the park's museum puts a personal face on the combatants by featuring personal camp gear of two of the participants. An eight-mile drive, bike, or hike trail visits the battle sites.

Chesapeake and Ohio Canal National Historical Park: A popular hiking and bicycling route, the towpath of the Chesapeake and Ohio Canal parallels the Potomac River for 184½ miles from Washington, D.C., to Cumberland. Operating from 1828 to 1924, the canal was used primarily to haul coal from western Maryland to the port of Georgetown in Washington. Original structures, including locks, have been preserved, and the towpath is open for recreation for its entire length. At Cumberland, its terminus, you can hike or bike a portion.

The Historic National Road offers timeless little villages in quiet hamlets and valleys that beckon travelers to get to know the best of scenic Maryland.