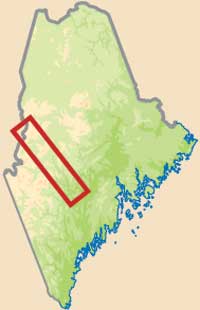 Find a snapshot of the past on the Old Canada Road Scenic Byway. Pass through villages and outposts that are much as they were at the turn of the 19th century. Remote and unspoiled, this neck of the Maine woods is a unique and beautiful place, where people live, work, and visit. The byway is in one of the most beautiful places in the Northeast. It winds right alongside the Kennebec River, Wyman Lake, the Dead River, and vast forests. Rivers dominate the southern half of the route, while forests command the northern section.

The southern half of U.S. 201 is where you will first encounter old-time villages such as Solon and Bingham. Vernacular architecture contributes to the feel of an earlier time. Moscow gives way to the steep shoreline of Wyman Lake. Your drive hugs the shore, revealing undeveloped ridges on the opposite shore and islands framed by dramatic stands of white birch. North of the West Forks, you'll see mountains and ridges, and an occasional moose or deer.

The Maine Historic Preservation Commission reports numerous archaeological sites around the Kennebec River that linked Maine Native Americans with other Native Americans. The oldest evidence in this area dates back at least 7,000 years.

The Kennebec River was crucial to the boundaries that were set and reset between the French and English, who were both trying to control this part of North America in the early 1600s.The English established trading posts (and later forts) at Augusta and Waterville. The French sent Jesuit missionaries along the route. Extensive archaeological remains show French and English habitation along the byway.

The Old Canada Road, which runs from the Canadian border to Solon, Maine, is rich in history brought by the French that settled the area in the 1600s.The byway served as a route for loggers, but the area was virtually uninhabited with the exception of a few sporadic villages. Today, evidence of the influence of French and English culture is found in language, music, community celebrations, and food.

The folk culture and regional identity comes in part from the immigration of people from French-speaking Canada. This influence is especially strong in the northern portion of the route, where many residents are bilingual. Many occupants of the area speak what is known as "Valley French," which is a combination of French, Quebecois, and English.

Throughout the year, communities along the byway celebrate their culture through festivals that honor French music and traditions. Because many of the French continued south to what is now Louisiana, both old French and Creole music are often celebrated in the area.

Visitors can learn about the area's early history and culture by touring the Jackman-Moose River Historical Museum in Jackman. The museum offers exhibits and memorabilia honoring logging culture and World War II, both of which influenced the present-day culture.

The Canada Road served as the primary link between Lower Canada and Maine from about 1820 to 1860. The various east-west linkages, as well as the southern connections that allowed detours off the Canada Road, permitted migrants to disperse along this route throughout New England.

The road began as settlers from the Kennebec Valley moved northward into Somerset County. The Yankee pioneers found themselves closer to the markets of Quebec City than to those of Boston. In the early 19th century, Quebec was a growing lumber and ship-building port, as well as a military and administrative center, and it needed provisions. So Yankee drovers took livestock north, through the woods on a trail they built between the roads that lay alongside the Kennebec and Chaudière Rivers (the Chaudière River is in Canada). It became obvious that it was to almost everyone's advantage to "close the gap" between these two road systems.

In 1817, the legislature authorized construction of a "traveled path" to be made suitable for the passage of loaded carts, sleds, and other such conveyances. It was to largely follow the old cattle drover's trail. Almost 25 miles in length, it ran from the north shore of Parlin Pond to the Canadian line. The next year Somerset County had the final 43 miles of road built between Concord and Parlin Pond along the west side of the Kennebec River.

By 1830, the dream of commercial profit finally drove government officials to upgrade the Canada Road into a carriageway that would accommodate drovers, entrepreneurs, government and military officials, laborers, couriers, hikers, sailors, farmers, and their families. Infrastructures began to develop in response to the increase of traffic as post offices, inns, stage lines, and customs houses were established.

Moose are the largest animals that will be seen along the byway. Standing up to seven feet tall, many call the byway home. They are unique in the fact that their legs are so long they need to kneel in order to drink from shallow puddles or lick salt from the roadways, as they often do. Please heed warning signs and enjoy the moose...at a safe distance.

Beavers have had a tremendous impact on the landscape for centuries. Their engineering skills have submerged thousands of acres, creating beneficial habitats for other creatures. Their work often creates enjoyable canoeing, kayaking, and fishing opportunities. Evenings provide the best opportunity for viewing this talented woodland rodent.

Hunting, fishing, and camping are the main attractions, but white-water rafting in this area of Maine is a thrill throughout the summer and fall. Winter offers the solace of silent winter trails or the invigoration of a lengthy snowmobile ride to distant towns and Canada.

Camping is available at a number of isolated public sites and private campgrounds, many near some of Maine's beautiful lakes and ponds. Canoeing is enjoyed on numerous lakes, ponds, bogs, and rivers. Enjoy birding from the serenity of a canoe floating in the lake. Drop your line in the water to lure tasty brook trout. Travel by canoe to untracked shores. For a unique experience to remember, visitors can enjoy the Moose River Bow Trip, a three- or four-day canoe or kayak trip of the Moose River that starts and ends at Attean Pond near Jackman.

The Appalachian Trail, one of the most famous multistate hiking trails in the United States, crosses the byway in Caratunk. The trail's 270-mile terrain throughout Maine is considered some of the most difficult of the 14 states the trail runs through, but the scenery is breathtaking. This rugged trail takes hikers through waist-high bogs, up steep inclines, and across the Kennebec River, which can only be crossed by ferry.

Considerations: Try to avoid coming during the Fourth of July and Labor Day weekends when the byway is really packed. Also, when driving the byway, be careful of moose in the road. Be aware of narrow passages of roads and logging trucks that are frequent on the byway.