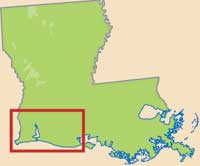 The Creole Nature Trail travels through thousands of acres of untouched wetlands that reflect an area blessed with some of the most beautiful scenery imaginable. If you like to photograph or hunt wildlife, the trail takes you to three different wildlife refuges and a bird sanctuary. If you aren't a duck hunter, you may like to try your hand at a little Louisiana fishing. The combination of fresh and saltwater areas provides a unique habitat for many of the plants and creatures that live along the byway.

Traveling the edge of the Gulf of Mexico, you will be enchanted by the entwining ecosystems of the coastland and the marshland. So drive the trail through Louisiana's very own outback and discover the culture, nature, and history awaiting you there.

Comparatively large concentrations of American Indian archaeological finds, such as pots, shards, and arrowheads, have been unearthed throughout Cameron Parish, and burial mounds were found on Little Chenier, indicating that the earlier American Indian populations must have been large and widespread.

The culture along the Creole Nature Trail is one that has been mixing and evolving for hundreds of years. Spanish, French, and African influences have all collided here in this coastal outback where alligators roam and hurricanes are known to swallow entire villages. The people of southwest Louisiana understand the place they live in and they revel in it. Throughout the year more than 75 festivals celebrate living on the Creole Nature Trail. Visitors might learn how to skin an alligator or enjoy some real Cajun cooking. All along the byway, historic buildings, nature trails, and even wildlife refuges provide a few more details about the way people live and enjoy life on the byway. Shrimp boats and ships in the Cameron Ship Channel reflect the importance of the Gulf in the area. Shrimp, crabs, oysters, and a host of fresh and saltwater fish are harvested daily. Visitors can sample these delicacies at area restaurants or purchase fresh seafood for their own recipes.

An infamous history prevails throughout much of the early 1800s on the byway. The pirate Jean Lafitte made a huge profit from capturing Spanish slave ships and selling the slaves to Louisiana cotton and sugar cane planters. His exploits involved everything from the African slave trade to liaisons with French spies. It is rumored that Lafitte buried riches and treasure chests all along the Calcasieu River.

When the Civil War came to Louisiana, battles were fought over Sabine Pass and Calcasieu Pass where the Confederates were successful. Standing today as a stalwart landmark, the Sabine Pass Lighthouse was built in 1856 and became a point of conflict during the Civil War.

The marshlands of coastal Louisiana are teeming with wildlife. They are a bird-watcher's paradise and a photographer's dream. These marshes are filled with the songs of the cardinal and blackbird, the quacking and honking of ducks and geese, the chatter of squirrels, the croaking of frogs, and the bellowing of alligators.

As a coastal prairie, much of the land along the byway displays beautiful wildflowers throughout the warmer months. Many of the flowers have memorable names, like maypop passionflower and duck potato. Unique plants can be found growing everywhere along the byway. Cordgrass grows where nothing else will, and a plant called alligator weed is a food source for deer, herons, and egrets.

One of the most popular activities for locals and visitors alike is the excellent fishing on Louisiana's coastline. Here, visitors will catch more than just fish. Crabs, shrimp, and oysters are also popular items to pull from the sea. Freshwater, saltwater, and brackish fishing are all available to travelers.

Even on the Creole Nature Trail, you may want a taste of civilization every now and then. Visitors love to stop in places such as Lake Charles or Cameron Parish just to take a look at the historic sites that make each town memorable.

Time to allow: A self-guided tour could take a day or two.

States it runs through: Louisiana

Considerations: There is no parking on highway shoulders except where designated. It is a good idea to bring insect repellent. Also, some wildlife in the refuges may be dangerous. For example, do not try to feed, tease, or prod an American alligator; it is perfectly capable of defending itself. The best months for alligator watching are April through October. Wildlife refuges are closed on federal holidays. Some hunting and fishing grounds require permits. Also, it is advised not to take dogs along at Marsh Trail because alligators may consume them.

Highlights of the Creole Nature Trail 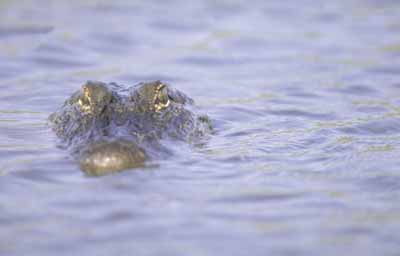 Alligators and other wildlife can often be spotted along the Creole Nature Trail.

The Creole Nature Trail provides scenery just as it should be in an outback wilderness--untamed and intriguing. These characteristics are preserved in the way wetland birds roam freely across the countryside and in the way that the ocean waves curl into the salt marshes. Study the shapes of sculpted oak trees that reside on the chenier ridges along the byway. The Creole Nature Trail provides scenery of extraordinary natural quality formed from the interactions of the Gulf of Mexico and the lowlands of Louisiana.

Mineral soils and higher ground form beach ridges, or cheniers as they are called in Louisiana. The most significant of these ridges is Blue Buck Ridge. The chenier ridges are where the live oaks grow, offering a habitat for songbirds and a beautiful photography opportunity.

This tour of the Creole Nature Trail begins in Sulphur, Louisiana (or, if you prefer, start at the other end of the byway and read this list from the bottom up).

Sulphur: At Sulphur, the area is characterized by rolling pastureland that gradually turns to wetland. Small ponds and bayous begin to appear as well.

Cameron Parish: Cameron Parish is the largest parish in the state. The vegetation in the area is mostly of the salt marsh variety. Additionally, the landscape is dotted with oil wells and oilfield pumping stations.

Hackberry: In Hackberry, you find an abundance of shrimp and crab houses along Kelso Bayou. Here, seafood is cheap and plentiful.

The Creole Nature Trail provides a rare opportunity to experience thousands of acres of unspoiled wetlands, and presents the very best of coastal Louisiana.