by the Scenic Drive Authors 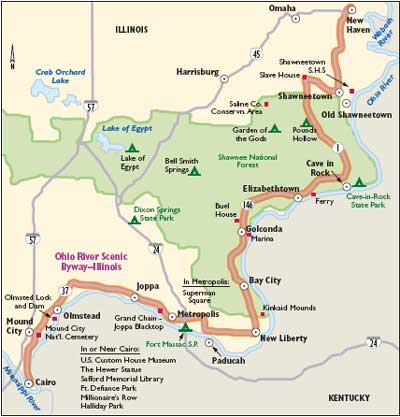 The Ohio RIver Scenic Byway's history is closely tied to the Ohio River, which it follows. Many forts from the Civil War and the French and Indian War were placed strategically along this route, and the Underground Railroad had many stops along this byway. This is where you can find the Cave in Rock, an enormous cave that was once home to river pirates. It is now a great vantage point from which to watch today's river traffic.

Digs were conducted at Fort Massac State Park in Metropolis from 1939 to 1942, and again in 1966 and 1970. From these digs, reconstruction of the fort was started. A museum holds artifacts from the excavations.

The spirit of those who live along the Ohio River can be seen at Fort Defiance Park in the town of Cairo. The park is a beautiful place to watch the constant meeting of the Ohio and Mississippi Rivers that refuse to merge. The Ohio River waters become a blue ribbon, rippling far down the brown Mississippi currents.

Because all this magnificent scenery is found along the Ohio River, there is much evidence in Cairo of the people's desire for beauty. For example, located in the Halliday Park at Washington and Poplar is "The Hewer," a statue that was made in 1906. Sculpted by George Grey Barnard and exhibited at the St. Louis World's Fair, this original bronze statue was declared by Laredo Taft to be one of the finest nudes in America.

Many historical sites are situated along the Ohio River Scenic Byway. These sites cover everything from early Native American cultures to Civil War sites. Kinkaid Mounds, a designated byway site, is a monument to the Native American people who once inhabited this region.

The cities of Old Shawneetown and Golconda have numerous historic structures from the 1820s and 1830s. Cairo, positioned at the confluence of the Ohio and Mississippi Rivers, was a thriving port city and an important strategic site during the Civil War, a history that's alive today in Cairo's many old houses and buildings. Fort Massac State Park in Metropolis is a reconstructed fort from the French and Indian War.

The Ohio River has been a river of both opportunity and tragedy. While the state of Illinois possesses many Underground Railroad sites, the byway also passes near the Slave House, where captured fugitive slaves and even freed blacks were incarcerated before being returned to the South. This constituted the little-known Reverse Underground Railroad

The Ohio Valley in Illinois is home to some of the most dramatic features along the entire Ohio River. The Garden of the Gods in the Shawnee National Forest preserves a grouping of unique limestone features with such names as Camel Rock and the Devil's Smokestack. Nearby Rim Rock and Pounds Hollow are also linked by the byway route. Along the byway, the Spur to Cave-in-Rock State Park is a great limestone cavern on the Ohio River. Farther west, the designated Cache River Spur takes visitors to a rare wetland ecosystem, designated by the United Nations as a Wetlands of International Importance.

The Horseshoe Lake Conservation Area in Miller City, seven miles north of Cairo, has 10,645 acres, including a 2,400-acre lake. The first 49 acres of the park were purchased by the Department of Natural Resources in 1927 for development as a Canada goose sanctuary. Additional tracts of land, including Horseshoe Island, continued to be purchased in order to create the conservation area that greets visitors today. Up to 150,000 Canada geese winter at this site.

In the tradition of the Mississippi steamships that featured gambling, drinking, and Old West living, a casino steamship still leaves the port of Metropolis. Along the Metropolis riverfront is the Merv Griffin Theater, which presents a range of entertainers on special dates throughout the year.

Considerations: During periods of significant flooding, segments of the route may be closed, especially the terminus of the route in Cairo. A narrow and hilly segment of the byway near Tower Rock in Hardin County is not advised for RVs or tour buses. An alternate route has been identified for these vehicles along the roadside. 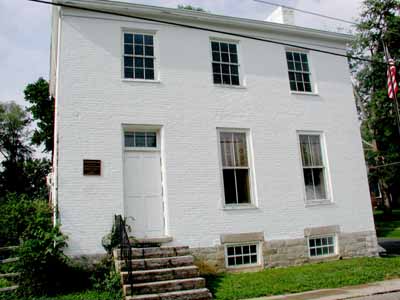 The Ohio River Scenic Byway must-see tour begins in Cairo and runs to the Indiana border. Here are some the sights you will see along the way.

The Hewer, Safford Memorial Library, and U.S. Custom House Museum: Taking Highway 51 right through Cairo (on Washington Avenue), travel 1.5 miles to The Hewer statue in Halliday Park on the corner of Washington and Poplar Avenues. About a half mile later, you can see the Safford Memorial Library, where you can pick up a 50-cent book out of the "treasure bin." Across the street is the U.S. Custom House Museum.

Fort Massac State Park: Fort Massac State Park is the next stop (two miles south of Superman Square), located on Highway 45, with picnic tables, a museum, and a variety of events that occur throughout the year. Follow the byway out through Brookport, Unionville, and Liberty up through Bay City to Golconda (about 45 miles from Metropolis), where you will find the Golconda Marina, the Buel House, and many antique and novelty shops.