The route of the Historic National Road is a road of history. Nineteenth-century river transportation and commerce, along with historic cemeteries, tell of the struggles of the early settlers on the western frontier. County fairs and main street storefronts speak of small towns where you can still find soda fountains, one-room schools, and old hotels.

Small and large museums, a National Register Historic District, and National Register Historic Sites are found all along the byway. Prehistoric Native American life is evident here as well, along with giant earthwork mounds that took 300 years to build. The atmosphere of old-fashioned travel is stored in the little shops and lodgings in towns along the way. The western end of the byway takes you to Eads Bridge and the gateway to the West.

The Cahokia Mounds State Historic Site bisects the Historic National Road. This remarkable World Heritage Archaeological Site consists of the largest mound buildings built by Native Americans on the North American continent. As you pass the site while driving the byway, you see Monk's Mound rising out of the ground on the north side of the byway, covering 14 acres and rising 100 feet into the air. You may also notice a large circle of wooden posts, known as Woodhenge, next to the road. The visitor center is the pride of the Illinois Historic Preservation Agency and provides more information on the site and the people who created it.

In 1806, Congress appropriated funds to construct a National Road that would run westward from Cumberland, Maryland, to the Mississippi River. The Illinois section was surveyed in 1828 by Joseph Schriver, and construction was started in 1831. The section to Vandalia was completed in 1836. However, the western section was never funded due to high costs and waning interest in road building. With the coming of the Terre Haute-Vandalia-St. Louis Railroad that paralleled the road, the National Road fell into disrepair, only to be resurrected in the early 1920s when it was hard surfaced and designated U.S. 40. Today, most of the original alignment of the 1828 surveyed road is still in place and is in public hands.

On the eastern end of the byway is Marshall, home to Illinois' oldest continuously operating hotel. Also on the eastern end is the village of Greenup, with its unique business section decorated with original overhanging porches. This village was designated as a Historic Business District on the National Register of Historic Places. In the central section is Vandalia, the second capital of Illinois. The Capitol, in which Abraham Lincoln passed his test to practice law, is now a State Historic Site and sits on the Historic National Road.

The Historic National Road in Illinois is dominated at each end of the byway by rivers. The Wabash River is on the east end, and the mighty Mississippi River lies on the west end. Rivers and lakes are scattered throughout the middle area, with flat prairies and hilly landscapes combining to create many natural features along the way. Different species of wildlife make their homes along the route, and fish are plentiful in the many lakes and rivers.

The topography along the byway was created by glaciers that advanced and retreated over the land during the Pleistocene Period, leaving behind moraines and glacial deposits that created regions of undulating landscape in some areas and flat prairies in other areas. The landscape of the byway is defined by three major areas: the Embarras River Basin on the east side, the Wabash River Basin in the central area, and the Sinkhole Plain on the west side (which is contained in the Mississippi River Basin).

The Mississippi River is the third largest river in the world. From flooding to fertile land, the river has shaped the lives of Native Americans, pioneers, settlers, and current residents of the many cities that dot the banks of the river. More than 400 species of wildlife -- including ancient lineages of fish -- live on and near the Mississippi River.

The byway offers many recreational opportunities. You can bike or hike on the various trails along the way. Numerous state parks allow you to enjoy the natural characteristics of the byway; many of the towns have parks and recreational facilities.

At Lincoln Trail State Park, you can travel the route Abraham Lincoln took from Kentucky to Illinois. This park is on part of that route, and today, it is a place where you can enjoy hiking, fishing, boating, or camping. Summer is not the only time to enjoy this area, however; wintertime sports include ice fishing, ice skating, and cross-country skiing.

Many lakes, rivers, and streams provide recreational opportunities. Carlyle Lake is a 26,000-acre multipurpose lake known for its great fishing and waterfowl hunting. At Eldon Hazlet State Park, controlled pheasant hunting is available, and bird-watching is also a popular activity. Carlyle Lake is well known among sailors, and you can rent a houseboat at the park. Camping and golf courses are available here as well.

Considerations: High season is during the fall. Some delays may be experienced during severe weather, and seasonal storms may increase driving times. 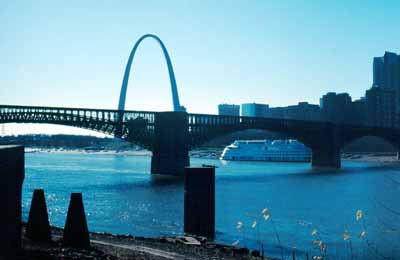 The St. Louis Arch is visible from Historic National Road.

The landscape of the Historic National Road in Illinois offers many scenic views to the byway traveler. The route is dotted with towns and rural communities, interspersed with rural lands and farms. The large metropolitan area of the western edge of the byway, in Collinsville and East St. Louis, provides a different kind of scene. From historic buildings and bridges to gently rolling hills, this byway exemplifies a scenic drive.

In the east, the rolling hills and interspersed forests provide a different view than the flat, unbroken views presented on the western edge of the byway. In between, cultivated fields, distant barns, farmhouses, and grazing livestock all speak of the nature of the land.

The Illinois section of the Historic National Road begins in Martinsville and goes to Collinsville. Here are some the sights you can see along the way.

Lincoln School Museum: This quality museum is located near Martinsville. The building itself was built in 1888, and the school is open to groups for an interpretation of early pioneer days.

Franciscan Monastery Museum: Dating to 1858, this historic monastery has a wonderful museum that displays artifacts from early settlers as well as the Franciscan Fathers. Visitors can view pioneer items such as toys and kitchen utensils, and religious items such as Bibles and vestments. There are also antique legal documents on display, such as marriage licenses. The monastery is located about five miles east of Effingham in Teutopolis.

My Garage Corvette Museum: This museum, located in Effingham, about 30 miles west of Martinsville, is a must for automobile lovers. On display are vintage Corvettes from the 1950s and 1960s.

Collinsville Historical Museum: Located about 90 miles west of Effingham in Collinsville, this museum offers visitors a unique glance into the region's residents all the way back to John Cook, the first settler in 1810. Many interesting artifacts are on display, including a variety of Civil War objects and miners' tools.

Along the Historic National Road visitors will have a chance to view bridges that are engineering marvels. But be sure to also look for Monk's Mound, a Native American engineering marvel; it took 300 years to build and is now a United Nations World Heritage Site. Illinois' portion of the Historic National Road holds many sights of historic and cultural value, as you'll discover along the way.