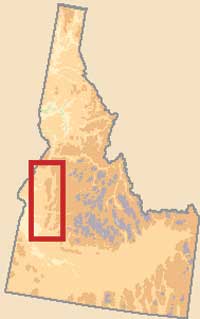 A drive along the Payette River Scenic Byway can be distracting for motorists. Rather than watching the road, you may be more inclined to watch the river as it crashes and tumbles its way over rocks and through the narrow river valley. Be sure to take advantage of the occasional pull-offs that allow you to view wilder parts of the river and treat your senses to the sights, sounds, smells, and rhythms of Idaho's famous white water.

Enjoy the scenic drive along the river through the Boise and Payette National Forests before arriving in the high, picturesque mountain valley dotted with the resort towns of Cascade, McCall, and New Meadows. Between the thunderous roll of the white water and the quiet serenity of the valley landscapes, you will find a thrilling adventure as you travel this mountain byway.

The people and events associated with this river stretch thousands of years back in time, creating generational ties between the past and present and between old-timers and new arrivals in Idaho. But most of the recorded history of this area started only a couple hundred years ago.

Fur trappers of the early 1800s, working for Hudson's Bay Company, named the Payette River in honor of their comrade, Francois Payette, a French-Canadian who explored much of southwestern Idaho. After explorers mapped the territory, pioneers began to settle the area.

Later, people began the construction of a bridge now called the North Fork Bridge, although locals refer to it as the Rainbow Bridge because of its arch. It crosses the North Fork of the Payette River north of Smiths Ferry. Built in 1938, it displays an open-spandrel design introduced to Idaho in the 1920s. Unlike other bridges of this type, the North Fork Bridge has not been altered over the years and is listed on the National Register of Historic Places.

Along the Payette River Scenic Byway rests the Idaho batholith, which offers a wealth of knowledge for geologists as well as precious samples for gemologists.

This unique geological feature covers much of the area and

is primarily made up of granite.

A lot of this batholith formation began millions of years ago, when magma pushed up on Earth's crust and created many

of the Idaho mountains. The magma eventually hardened

below the surface and is now known as the batholith; through erosion, you can see the cooled rock today.

Yet much has happened to the land in the last 12,000 years, making Idaho a geologically active place. Quite recently (relatively speaking), magma oozed out of Earth's crust in many places and has also shot out of volcanoes, warping the land and changing the environment.

Due to differences in the magma's cooling times and conditions, the Idaho batholith contains many rare and valuable minerals, including the star garnet, jasper, and opal, making Idaho an ideal place for gemologists to collect gems. (Idaho is, after all, known as the Gem State.) The area also boasts many gold, silver, copper, and zinc veins.

This Idaho batholith created a unique landscape that interests sightseers as well as geologists. There are mountains made out of solid granite and valleys carved out of this hard mineral. And because many areas near Payette River Scenic Byway are still quite new (geologically speaking), several rugged peaks have not bowed down to the effects of gravity. Furthermore, people can see the traces of glaciers, as these, too, have not yet disappeared.

Of all the activities available here, white-water rafting ranks perhaps as the most popular. People find braving the rapids on the Payette River especially enjoyable.

There is an abundance of white water along the Payette River Scenic Byway, and rafters rarely experience a boring moment. The rapids range in sizes, so rafters with less adventuresome spirits can usually avoid the more commanding waves. As you raft in the Payette River, you'll witness sparkling clean water and gorgeous, jagged peaks looming high above the canyon.

Other than rafting, you can find numerous places to settle down for a relaxing picnic, enjoy world-class trout fishing, and hike or bike the plentiful mountain trails. Many enjoy viewing wildlife in the wetlands around this area, which attract bald eagles, ospreys, and Canada geese.

During the cold winter months, snowmobiling replaces rafting as the most popular activity, although skiing and snowshoeing follow close behind.

States it runs through: Idaho