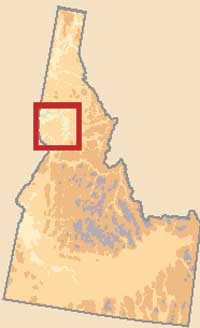 By traveling the Northwest Passage Scenic Byway you can follow in the footsteps of Meriwether Lewis and William Clark who traversed this link between the Missouri River and the Columbia River through the unexplored Rocky Mountains.

Lewis and Clark's arduous journey proved that no easy route existed; however, they were led by Sacagawea to the trail through the mountains that had been used by generations of Nez Perce Indians. Along the Northwest Passage Scenic Byway, you will see numerous Nez Perce cultural sites and Lewis and Clark campsites.

At Big Eddy, evidence of early native occupation has been discovered. In Eimers Park's Tolo Lake, the remains of mammoths and an extinct species of bison were discovered at the bottom of the lake in 1994. During the excavation, archaeologists determined that the bones exhumed were only a fraction of what is actually at the bottom of Tolo Lake.

Although a conglomeration of cultures and people make up the Northwest Passage, none of the cultures has preserved its heritage like the Nez Perce. Agriculture and industry fostered by the coming of homesteaders and gold miners exist side by side with the customs of the Nez Perce. Experience one of their powwows, or see the Nez Perce National Historic Park, where local arts and crafts are displayed.

Before the Northwest Passage became a nationally recognized corridor, the route was home to the Nez Perce, and it remains their home even today. For thousands of years, this native culture built villages and camps along the Clearwater River. The Northwest Passage was a main route for the Nez Perce as they traveled through the mountains and forests of what is now northern Idaho. The society of the Nez Perce met the society of European culture when Lewis and Clark traveled through the area in 1805 and 1806.

After the coming of the Lewis and Clark Expedition, new visitors wanted to do more than explore. Trappers, missionaries, and miners soon followed, and they interacted with the Nez Perce. For a time, people gathered in the area in hopes of discovering gold. The mining districts from this period in history eventually became the towns that are now on the Northwest Passage Scenic Byway.

In the 1870s, conflict mounted between the Nez Perce and the U.S. government. The battle ended with many of the Nez Perce dead; the rest were moved to reservations. Today, the byway travels along the Nez Perce Indian Reservation and passes Nez Perce National Historic Parks in Spalding and Kamiah.

Although many of the valleys are now green agricultural fields, the mountainsides are covered in trees, and the sights and smells of the forest still have an overwhelming presence on the byway. Canyons and valleys appear along the Northwest Passage Scenic Byway to display the varied topography of the area. Rocks exposed along the byway are part of basalt lava flows from the Columbia Plateau that formed millions of years ago.

In addition to the scenery, wildlife also thrives here. The rivers are filled with fish, such as steelhead trout and Chinook salmon, and the forests are home to deer, elk, and other species. The variety of tree and plant life that grows along the byway creates a habitat for all these creatures.

The road is surrounded by rivers. Along the Northwest Passage Scenic Byway, travelers can hardly escape the allure of the Clearwater River and its forks. Nearby,

you will also find the Snake and Salmon Rivers. And whether you choose to enjoy what's in the water or the water itself, you won't be disappointed. Chinook salmon swim in the waters, and fly-fishing for steelhead trout is one reason people return

to the Northwest Passage. White-water rafting on one of the byway rivers is also irresistible.

If you get enough of the water, a walk in the woods may entice you. Travelers take trails through mountains for the sweeping vistas they can enjoy along the way. National forests, wilderness areas, and even state parks give you the opportunity to find trails and go exploring.

States it runs through: Idaho

Cities it runs through: Grangeville