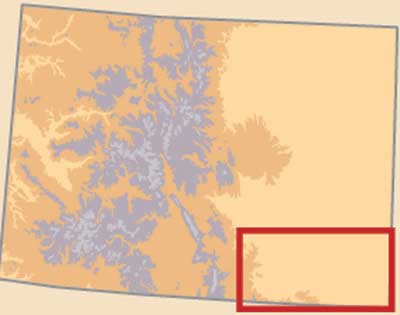 The Santa Fe Trail Scenic Byway is a rich legacy of the many people who made their way across southeastern Colorado. This transportation route served as a corridor to the West and resulted in the meshing of many cultures and traditions.

Today along the byway, festivals and museums honor the many men and women who left a distinctive mark on the area, including early Native Americans, military personnel, ranchers, miners, and railroad passengers.

Early people left signs of habitation along the Santa Fe Trail Scenic Byway in many forms, including rock art, Native American tepee rings and fire circles, and other evidence of prehistoric and settlement-era activities.

Southeastern Colorado has many sites that have both petroglyphs and pictographs. These images speak of days long past, and part of the enjoyment of viewing rock art is hypothesizing about what the images may mean. Perhaps these symbols were religious in meaning, were used as calendars, or conveyed information about natural resources.

Southeastern Colorado is embedded with Mexican culture; the area was a Mexican territory longer than it has been a part of the United States. Even after the United States acquired Mexico's northern provinces in 1848, the Santa Fe Trail served as a conduit for exchange among Spanish, Native American, and American cultures.

Communities along the Santa Fe Trail Scenic Byway continue to celebrate the diverse inhabitants through traditional celebrations, culturally representative architecture (such as adobe structures), religious folk art, and Hispanic culture at Trinidad's Baca House Museum (located in the Trinidad History Museum) and other museums. Large murals depicting the Santa Fe Trail and Western history are painted on the exterior of commercial buildings as reminders of cultural contributions.

The Santa Fe Trail Scenic Byway parallels the Santa Fe Trail, which served as a trade route between Missouri and the Mexican frontiers from 1821 to 1880. Traders, miners, military, and settlers all used this route. Even during the Civil War, the area saw action as Colorado volunteers fought against Confederate troops. With the coming of the railroad, the Santa Fe Trail entered a new phase of its history.

Travel on the trail was beneficial but dangerous for those making the journey. In 1834, Charles and William Bent and Ceran St. Vrain built a fort to protect trading activities among the Americans, Mexicans, and Native Americans. Visitors can go to Bent's Old Fort today and see what fort life was like. Miners heading to California in search of gold often chose the shorter, although more dangerous, route of the Santa Fe Trail rather than the Oregon Trail.

After the railroad came through the area, the nature of the Santa Fe Trail changed, and in 1861, the Barlow-Sanderson stage line was established with Trinidad as a major stop. With America embroiled in the Civil War, the Colorado Territory also saw an increase in military traffic.

The Santa Fe Trail corridor provides an opportunity to discover an undisturbed, pristine landscape while observing the wide diversity of wildlife habitats. Southeastern Colorado varies from prime agricultural land to expanses of native grassland; four state wildlife areas in the corridor cover more than 10,000 acres. Rivers have carved canyons and valleys, where striking geology and unusual rock formations can be found.

The Comanche National Grassland offers an area of rich natural qualities. The features of this landscape vary from short and midgrass prairies to deep canyons and arroyos, or waterways. This area was once the site of a sea, and today fossils of prehistoric sea creatures have been found in the Comanche National Grassland. In addition to these fossils, there is a set of dinosaur tracks south of La Junta that is the longest set of tracks in North America.

The Santa Fe Trail Scenic Byway offers more than 30,000 acres of public land that supports a variety of recreational activities.

The Arkansas River follows the byway for a good portion of the route, providing many opportunities to enjoy the riverbanks. In addition, the John Martin Reservoir's blue waters give you a chance to enjoy a fun day of swimming, picnicking, camping, boating, water-skiing, sailing, or windsurfing. Fishing is another popular activity both on the lake and in nearby rivers.

An abundance of other wildlife is located along the Santa Fe Trail Scenic Byway. Desert bighorn sheep, eagles, cranes, pelicans, lesser prairie chickens, and hummingbirds can often be spotted in the area. Hunters come to southeastern Colorado for prime hunting opportunities; in fact, Prowers County is known as the goose hunting capital of the nation.

Considerations: The best time of year to drive the Santa Fe Trail Scenic Byway is early spring through late fall. 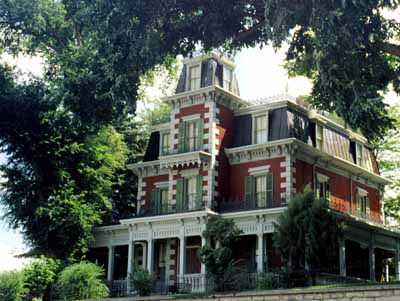 The Bloom Mansion is part of the Trinidad History Museum, one of the attractions along the Santa Fe Trail Scenic and Historic Byway.

Scenic qualities along the Santa Fe Trail Scenic Byway range from panoramic vistas of the Spanish Peaks, Fisher Peak, and Raton Pass to the verdant, irrigated croplands of Colorado's high plains. Picturesque windmills and evidence of homesteads provide travelers with a glimpse of life as a settler.

In addition, the byway passes through communities that are scenic in their own right, from the Corazon de Trinidad National Historic District to quaint rural farm towns.

Bent's Old Fort: This National Historical Site is a reconstruction of Bent's Fort, which was built in the 1830s. The fort played an important role as a trading post for trappers and the Plains Indians and also as a supply depot during the Mexican-American War.

Sierra Vista Overlook: For Santa Fe Trail travelers heading south, the changing horizon from plains to mountains was a major milestone on their journey. One of their guiding landmarks was the distant Spanish Peaks, which came into view along this section of the trail. A short walk up the side of a bluff gives you an excellent view of the Rocky Mountains and surrounding prairie, much like what early travelers saw.

To reach this overlook, drive southwest from La Junta on Highway 350 for 13 miles. Turn right (north) at Highway 71 for 1/2 mile, and then turn left (west) to the parking lot.

Trinidad History Museum: This museum complex, operated by the Colorado Historical Society, houses five attractions in one location. Visitors to the site can visit the Santa Fe Trail Museum, the Baca House, the Bloom Mansion, the Historic Gardens, or the bookstore.

Travel the route along which many have gone before, including pioneers, Native Americans, and miners -- the Santa Fe Trail Scenic Byway.