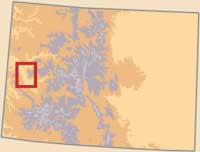 A scenic drive along the Grand Mesa Scenic Byway is like a trip through history. The Utes called the Grand Mesa "Thunder Mountain." This name is fitting because, when standing at the Lands End Observatory, the Grand Valley unfolds more than a mile below, and you can imagine yourself as Zeus, ready to hurl thunderbolts. The 63-mile Grand Mesa Scenic and Historic Byway is transcendent as it climbs through the dusty canyon of Plateau Creek to the cool evergreen forests of the mesa top.

Many scenic overlooks along the byway allow you to glimpse the extraordinary landscape below. The Lands End Road follows the rim of the mesa for much of the way. From here, you may be able to see the peaks of the LaSal Mountains 60 miles to the west in Utah and may even see the San Juan Mountains in Colorado 90 miles to the south.

The first Europeans known to have come to the Grand Mesa were members of the famous Dominguez-Escalante expedition. In 1776, Ute guides led them over Grand Mesa because the expedition couldn't find a good land route to California on their own. More Europeans came as fur traders in the mid-1800s.

Early treaties "gave" this land to the Utes, but as settlers moved to Colorado, the U.S. government made a series of treaties with the Utes that reduced the territory by degrees. In the early 1880s, the Utes were moved to reservations in Utah and southwestern Colorado, and cattle and sheep ranchers soon dominated the area.

Since 1881, the valley floor has been home to farmers, who rely on water from the Grand Mesa for their crops and orchards. Beginning in the late 1800s, numerous water storage and irrigation projects were initiated to bring the water from the mesa. These water conservation systems continue to operate today.

Fishing has been promoted since 1893, when the Mesa Resort Company was established. The company built several lodges and more than 300 summer homes. Skiing on the mesa dates back to 1939, with the construction of the Mesa Creek Ski Area. Relocated in 1964, it is now The Powderhorn Ski Resort.

Touring the scenic Grand Mesa began with horse and buggy trips that lasted several days. Access was improved in 1895 with the completion of the first road through Plateau Canyon. A stage line and freight wagons regularly traveled the route. The road was improved with convict labor in 1911 and later became part of the Pikes Peak Ocean-to-Ocean Highway.

A second access route to the top of the mesa was constructed in 1933 by ex-servicemen on a Civilian Conservation Corps (CCC) crew. The twisting, rocky road was then known as the Veteran Road in their honor. It is now called Lands End Road.

With the advent of better roads and automobiles, the popularity of Grand Mesa touring has continued to expand.

Geologically, the Grand Mesa is a lava-capped plateau. Lava flows occurred in ancient river valleys about ten million years ago. However, unlike many lava flows, no volcanic cone or crater was associated with the Grand Mesa flows. Instead, these flows rose through fissures in the Earth's surface on the eastern part of the mesa.

Erosion over the last ten million years has removed the hills that were composed of softer rocks. These rocks surrounded the harder lava-filled valleys, leaving the lava-capped terrain as a high plateau.

During the Wisconsin Ice Age that occurred 50,000 to 100,000 years ago, glaciers formed on Grand Mesa. Some of these glaciers flowed down the north side of the mesa, over the area where The Powderhorn Ski Resort is now located and into the valley of Plateau Creek.

The town of Mesa is built upon glacial gravels, and many of the lava boulders in Plateau Canyon were deposited by a glacial river that was much larger than the present-day Plateau Creek.

The drive along the Grand Mesa Scenic and Historic Byway takes you up through numerous ecological transitions that you would normally have to travel a much longer route to see. The ecology includes 5,000-foot elevation pinon-juniper desert canyons, aspen foothills, lily ponds, and alpine forest at 11,000 feet.

The animal life found in each zone changes with the seasons. During the summer, elk and deer roam the alpine forests, while winter snow depths of five feet or more drive them to the lower elevations.

There is a great change in temperature as the elevation changes, too. Even though it can be hot and dry on the valley floor, the mesa's top may have enough snow for a snowball fight.

Considerations: There are no services between Cedaredge and Mesa. Wildfires are an ever-present danger in the dry summer months; follow all posted signs regarding campfires, and do not throw cigarettes out the car window. Abandoned mines are extremely dangerous -- look and take pictures but do not explore. The Grand Mesa Scenic and Historic Byway traverses high mountain passes; be prepared for all types of weather. High altitudes bring increased sun exposure and reduced oxygen. 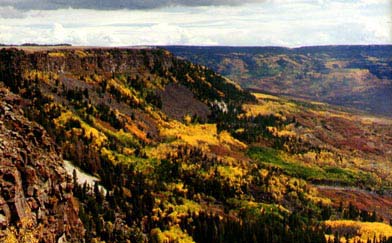 Byways.org The Grand Mesa is the world's tallest flat-top mountain.

The byway passes through shimmering aspen and aromatic pine forests, by meadows of wildflowers, and among endless sparkling lakes. You have the opportunity to observe major changes and diversity in the landscape, from desertlike approaches to dense forests atop the Grand Mesa. Scenic overlooks, rest areas, trails, and picnic areas are clearly marked along the byway.

You can begin your scenic drive along the Grand Mesa Verde Scenic Byway in the Lands End Observatory and proceed south.

Lands End Observatory: This spur of the Grand Mesa Scenic and Historic Byway ends at the spectacular views around the Lands End Observatory. This structure, which is listed on the Register of Historic Sites, was built in the late 1930s as a public-works project. It is perched on the edge of Grand Mesa and offers views of the valley 6,000 feet below and the LaSal Mountains in Utah to the west.

Land-O-Lakes Overlook: When you return to Highway 65, proceed south to the sign for the Land-O-Lakes Overlook. Due to the area's geology, the Grand Mesa is dotted with more than 300 streams and reservoirs. A 100-yard trail to this overlook provides a great view that displays many lakes and the West Elk Mountains in the east.

Pioneer Town : These facilities are located together in the town of Cedaredge. Exhibits are open to the public daily, Memorial Day to late September. The facilities provide visitor information, exhibits, and a tour of a reconstructed town that depicts the lives of pioneers in the area.

Whether you're in search of incredible skiing or some breathtaking views, the Grand Mesa Scenic Byway is the route for you.