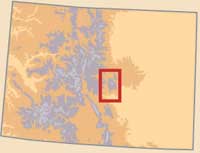 The roads themselves are part of the personality of the Gold Belt Scenic Byway. The byway follows historic railroad and stagecoach routes, leading you to North America's greatest gold camp, three world-class fossil sites, and numerous historical sites.

The Shelf and Phantom Canyon Roads offer adventurous driving experiences along unpaved routes through winding canyons. Paved roads wind through the gently rolling mountain parklands of the High Park route, where Colorado's highest mountain ranges rise in the distance. Teller 1 (a county road) travels through the pastoral Florissant Valley, with Pikes Peak in the background.

The five byway communities invite you to share in their rich history. In Cripple Creek, the historical hub of the mining district and a National Historic Landmark, visitors enjoy the variety and beauty of the early 1900s architectural styles in the downtown district.

The area's mining heritage continues in Victor, the City of Mines. Surrounded by hundreds of historic mines, Victor is the headquarters for a modern gold mine. Victor's downtown district, a National Historic District, includes beautifully restored buildings.

To the south, you can enjoy the Royal Gorge as well as restaurants, museums, and historic sites in Canon City and Florence. Florissant, the Gold Belt Tour Scenic and Historic Byway's northern gateway, offers the Florissant Heritage Museum to interpret the area's numerous historic sites and Ute cultural sites.

Archaeological sites can be found throughout the Gold Belt Tour Scenic and Historic Byway and provide a comprehensive look at the past and the creatures that lived in this area millions of years ago.

With three fossil beds along the byway, gold was clearly not the only treasure to be found within the mountains and hills of this section of Colorado. When settlers were done digging for gold, many excavations of the fossil beds in the area began, and the discovery and search for fossils on the byway continues today. What has been found is one of the most diverse and complete collections of fossils on the continent.

For millions of years, creatures have been preserved in the rock and stone along the Gold Belt Tour; in fact, 460-million-year-old tracks of arthropods have been found at Indian Springs Trace. This discovery led scientists and even visitors to conjecture about the way the world was so many ages ago, and scientists use these fossils to explore new ideas in evolution.

The Florissant Fossil Beds include imprints and fossils of creatures and their environment from 35 million years ago. Garden Park Fossil Area holds bones of many favorite dinosaurs, including Brachiosaurus and Stegosaurus.

Exploration of the fossil beds along the Gold Belt Tour gives you a glimpse of Earth's age and fascinating history. Although fossil hunting is prohibited for visitors at these places, in areas outside these parks, you may find a fossil of a prehistoric plant or insect.­

The Gold Belt Tour once sported a classic culture of the Wild West. Gold miners, saloons, and the untamed land of the Rocky Mountains are all part of the cultural past of this byway.

Although you probably won't experience a gunfight in the streets of a byway town, the towns along the Gold Belt Tour are fiercely proud of their heritage and bring pieces of the past to the surface for visitors throughout the year.

The mining culture was not the first culture to inhabit the mountains of the Gold Belt Tour. Many native cultures, including the Ute, lived here and developed their own unique way of life. The area was a prime hunting spot and a good place to spend the winter because of its relatively mild climate. The history of these cultures has faded to only a few stories and archaeological artifacts.

In the 1800s, a new culture came to the Gold Belt Tour. Settlers from the east brought with them a new organization of towns, roads, and mines, coupled with all the lawlessness of gunfights and hangings. Respect for the land by the area's predecessors was replaced by a way of life that used up the resources around the people.

When the gold boom subsided, however, the communities of the area decreased to smaller sizes, allowing the surrounding regions to continue in their natural beauty.

Now, the culture of the Gold Belt Tour Scenic and Historic Byway is one that appreciates the natural wonders of the byway while still remembering the days of miners and cowboys. Many of the towns that exist today along the byway hold festivals and events throughout the year that both visitors and residents attend.

Cripple Creek was the center of the Gold Boom. Bob Womack discovered gold in 1890, setting off a gold rush that brought people from all over the country and put Cripple Creek on the map.

By 1900, three railroads, two electric tram lines, modern water and sewer systems, and many other conveniences separated Cripple Creek from the average western mining camp. Cripple Creek became the financial and commercial center of what is known as the Cripple Creek Mining District.

Today, many of the historic buildings that played such a prominent role in the days of gold have been restored, and the entire downtown area of Cripple Creek is a National Historic Landmark.

Victor, which lies just southeast of Cripple Creek, was historically the home of the miners and their families. The downtown area of the city boasts several buildings that are on the National Register of Historic Places, and Victor's downtown itself is a National Historic District.

Florissant is north of the Cripple Creek Mining District. It stands at the crossroads of two important Ute Indian trails. It was a stopover for American Indians, trappers, traders, and mountain men long before silver and gold were discovered in the mountains to the west. In 1886, the railroad came through Florissant and was the closest rail connection to the mining district in the early years of the gold boom.

South of the Cripple Creek Mining District lies the Arkansas River Valley and two more communities that have historical significance. Canon City and Florence both sought the overflow of wealth coming out of Cripple Creek during the golden years. Both cities were established in the second half of the 1800s and have a rich historical past. In Canon City, visitors can enjoy a tour of some early railroad depots that have been restored.

Along with the communities found on the Gold Belt Tour, the routes themselves have historical significance. Phantom Canyon Road follows the abandoned railroad grade of the Florence and Cripple Creek Railroad, the first railroad to reach the gold mines.

Today, travelers on Phantom Canyon Road go through tunnels, drive over bridges, and see past remnants of train stations used by the railroad back in the 1890s. Shelf Road was constructed in 1892 and was the first direct route from Cripple Creek to the Arkansas River Valley.

Today, travelers experience the shelf -- a narrow, winding section of road perched high above Fourmile Creek -- much the same way that people experienced it in the 1890s.

After you reach the outskirts of Cripple Creek, you pass several historic mines and mills. High Park Road travels through a high-elevation park that is home to cattle ranchers. This land along High Park Road represents 150 years of ranching history.

Historic ranch buildings, such as the Fourmile Community building, lie along the byway route. Other roads such as Skyline Drive near Canon City provide beautiful views and interesting historical background.

Located in the Rocky Mountains, the Gold Belt Tour is a worthwhile visit for anyone who enjoys outdoor splendor. The landscape along the byway resulted from multiple alternating periods of mountain building and flooding by an inland sea; you can see sandstone formations and limestone cliffs that were formed as a result of this geological history.

The remains of ancient plants and animals deposited during the flooding produced the rich coal and oil fields in the Arkansas Valley near Florence. It also created fossil beds at Garden Park Fossil Area and Indian Springs Trace.

In addition to its unique collection of fossil beds, the Gold Belt Tour is a land with a volcanic history. In the areas of Cripple Creek and Victor, volcanic activity that occurred six million years ago formed the terrain.

One volcanic cone was nearly 15 miles wide and rose 6,000 feet above surrounding hills. This volcanic activity is the reason the byway is called the Gold Belt Tour today; it influenced the formation of the gold that was discovered in the 1800s.

Visitors here can see a wide variety of fossils, from those of insects to petrified trees. The fossils offer insights into the environment of 34 million years ago.

Garden Park Fossil Area, located along Shelf Road, has provided the world with many unique and complete dinosaur skeletons. The first major discoveries of large, plant-eating dinosaurs were made here in the 1870s, while the best example of a complete Stegosaurus skeleton was found in 1992. You can take a guided tour and view the fossil quarries where these miraculous discoveries were made.

Adjacent to Phantom Canyon Road lies Indian Springs Trace, which contains portions of an ancient sea floor and was designated a National Natural Landmark in 1979.

Although it is no more the gold-mining district it once was, the Gold Belt Tour is still the road to riches as far as recreation is concerned. Camping is available in several places throughout the area, allowing you to camp your way through the Gold Belt Tour. In addition to outdoor recreation areas, you'll likely be pleased with the historic museums and fossil parks along the route.

The Royal Gorge Park, owned by Canon City, is one of Colorado's top tourist destinations. The impressive chasm of the Royal Gorge is spanned by the world's highest suspension bridge. At the bridge, a concessionaire operates an incline railway, aerial tram, and other attractions for visitors. Hiking trails and picnic areas can be found throughout the park.

Beginning at Canon City, the Royal Gorge Route leaves on a scenic train ride through the bottom of the gorge. Not only are you treated to a view of the natural wonders in the gorge, but you also catch glimpses of history in ruins from the Royal Gorge War. Canon City also provides you with opportunities to explore prehistoric creatures at the Garden Park Fossil Area or the Dinosaur Depot Museum.

A portion of the Arkansas Headwaters Recreation Area is located along the Gold Belt Tour Scenic and Historic Byway. Colorado's Arkansas River between Leadville and Canon City is among the nation's most popular whitewater rafting destinations, hosting more than 300,000 boaters annually. The river also offers some of Colorado's best fly-fishing.

Shelf Road Recreation Area attracts rock climbers from around the world. The limestone cliffs offer short but extremely difficult climbs in some places. In other spots, they are more than 100 feet high and are enticing even to expert climbers. An extensive trail network along the cliffs provides hiking opportunities for climbers and nonclimbers alike.