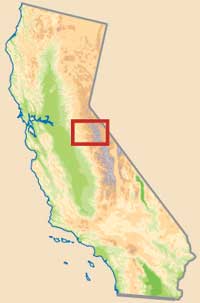 Tioga Road offers one of the most spectacular passages over the Sierra Nevada, making it the highest automobile pass in California, with an elevation change of more than one mile from west to east.

The Tioga Road provides motorists with an opportunity to experience this scenery from a vehicle. For hiking enthusiasts, it offers some of the most beautiful High Sierra backcountry trails.

The area now encompassed by Yosemite National Park was once home to various nations of Native Americans. By the mid-1800s, when American explorers first caught sight of the area, the natives were primarily of Southern Miwok ancestry and called themselves the Ahwaneechee. The word Yosemite is in fact derived from the Ahwaneechee word for grizzly bear, uzumati.

These earliest inhabitants of Yosemite soon found themselves at odds with the new settlers of the area. The Gold Rush of 1849 brought thousands of settlers to Yosemite, many crossing over the Sierra Nevada in search of their dreams.

Conflict between the natives and the new settlers followed, and eventually California authorized the organization of the Mariposa Battalion to gather the Ahwaneechee and relocate them to various other places in the state. Thus the Yosemite valley opened for tourism, which today brings more than three million visitors annually.

The many new visitors to the beautiful area did not come without impact, so citizens began a campaign to preserve the area. On June 30, 1864, President Abraham Lincoln signed a bill granting Yosemite Valley and the Mariposa Grove of Giant Sequoias to the state of California as an inalienable public trust. This marked the first time in history that the federal government set aside scenic lands simply to protect them and to allow for their enjoyment by all people.

This act also paved the way for the establishment of the nation's first national park, Yellowstone, in 1872. Later, a concerned and energetic conservationist, John Muir, brought about the creation of Yosemite National Park on October 1, 1890.

The Tioga Road crosses right through the middle of an area known worldwide for its unique natural features. Yosemite National Park includes three major natural features: forested mountains and bald granite domes, mountain meadows, and Earth's largest living thing -- the giant sequoia tree. Two hundred miles of roads help travelers enjoy all these features, whether by car or by the free shuttle buses offered in some areas. To get to know the real Yosemite, however, you must leave your car and take a few steps on a trail.

The mountains and granite domes of the Sierra Nevada began to take shape about 500 million years ago, when the region

lay beneath an ancient sea. The seabed consisted of thick layers of sediment, which eventually were folded, twisted, and thrust above sea level.

At the same time, molten rock welled up from the Earth and slowly cooled beneath the layers of sediment, forming granite. Over millions of years, erosion wore away most of the overlying rock, exposing the granite. While this continued, water and then glaciers shaped and carved the face of Yosemite, leaving massive peaks and bare granite domes. Today, the park ranges from 2,000 feet to more than 13,000 feet above sea level.

The meadows of Yosemite are natural wonders in their own right. They are the most diverse parts of Yosemite's ecosystem, providing food and shelter for nearly all the wildlife living in the park.

In the summer, the meadows and lakes are busy with life, as the plants and animals take advantage of the short warm season to grow, reproduce, and store food. The meadows are also unique because they are immense fields of bliss recessed and secluded in the middle of towering granite mountains. The more popular and accessible meadows are found in Yosemite Valley, Tuolumne Meadows, and Wawona. The middle and upper elevations of the park also contain secluded, perfect mountain meadows.

The mighty sequoia is the largest living thing on Earth. Yosemite is one of the few locations where the sequoias can be found, growing in any of three sequoia groves.

Mariposa Grove of Giant Sequoias, 35 miles south of Yosemite Valley, is the largest of the groves. The oldest of the sequoia trees have been dated at more than 2,700 years old. The greatest of the trees have trunk diameters of more than 30 feet! Although the more slender redwood trees along California's coast surpass the sequoia in height, the much more robust sequoia is no shorty, with the highest measuring more than 300 feet tall.

View Enlarged Image This map will guide you along Tiaoga Road.

For more than a century, Yosemite National Park has been a premier destination for recreation. Its unique natural qualities and breathtaking scenery provide the perfect backdrop for outdoor recreational activities. Put hiking on top of your to-do list because just a bit of hiking can take you to places more rewarding than sites just off the highway.

The summer season, although short along the Sierra Nevada, offers the most accommodating environment for recreation. Hiking, fishing, camping, wildlife viewing, mountain and rock climbing, backpacking, and photography are some activities available in the park. Yosemite's wilderness presents experiences for both seasoned hikers and novices. About 800 miles of trails offer a variety of climate, elevation, and spectacular scenery.

In the winter, Yosemite's high country is a serene, white wonderland. The land is covered by deep, undisturbed snow, creating a landscape far different from the summer's. The winter months in Yosemite are seeing increased amounts of mountaineering activities. Meanwhile, cross-country skiing and snowshoeing have grown in popularity and opened up a new world for backpackers.

Whether you visit in the winter or summer, Yosemite National Park offers an unparalleled chance to get away from it all.

Considerations: Tioga Road is closed during the winter from Crane Flat Junction to Lee Vining due to snowfall. The maximum speed limit is 45 mph along the byway. You'll find limited fueling opportunities. Yosemite National Park charges an entrance fee.