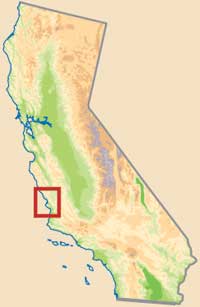 San Luis Obispo North Coast Byway, a segment of Route 1 in north San Luis Obispo County, winds past and through some of the finest views in the western United States. The byway blends the rural beauty associated with much of Route 1 in the northern portion of the state with the convenience and amenities found in the more heavily populated southern sections of California.

The city of San Luis Obispo had its beginnings in the 1772 founding of the Mission San Luis Obispo de Tolosa by Father Junipero Serra; it was named for the Franciscan saint known as Louis, Bishop of Toulouse (France).

Built on a knoll beside a sparkling creek, the mission became the hub of a growing settlement, serving as the center of both the community and the county. Many considered Mission San Luis Obispo to be the most beautiful of all California missions.

During the 1880s, the Southern Pacific Railroad built a railroad south from San Jose. After a five-year delay, the railroad came to San Luis Obispo in 1894. Construction of the railroad helped bring both industry and variety to the small community and changed the face of the city.

Hearst Castle, or the Hearst San Simeon State Historical Monument, is just off the byway. The castle, a living monument to the area's early 20th-century history, was built by publisher William Randolph Hearst, who entertained the rich and famous there. He intended it to be an elaborate getaway, complete with fine art and architecture. This historic treasure now provides a look into the windows of the past; it is one of the most heavily visited facilities in the California State Park System.

One of the most remarkable recent activities along this

stretch of Route 1 is the establishment of breeding colonies

of elephant seals near Piedras Blancas Point. As you drive, elephant seal colonies are easily viewed from the byway.

In addition, the California Department of Transportation, working closely with Hearst Ranch Corporation, has provided excellent vista points and informational kiosks about the seals, which are the largest of all pinnipeds and can exceed two tons in weight and ten feet in length. Like many marine mammals, elephant seals were hunted to near extinction in the 19th century, and, until recently, the huge seals lived in isolated areas far from humans. Then, in 1990, they started colonizing the unspoiled beaches and coves just south of Point Piedras Blancas.

The San Luis Obispo North Coast Byway also bisects lush valleys and rural farmland. The byway skirts the Morro Peaks and the Santa Lucia coastal mountain range and goes through the state's southernmost native Monterey pine forest. Equally important is the fertile land of the area, a significant natural resource for farming, which is one of the important industries of California.

The San Luis Obispo corridor is blessed with pristine opportunities for outdoor recreation. Visitors may hike, cycle, surf, ride horses, watch birds, windsurf, hang glide, kayak, and fly kites, among many other activities. The excellent climate of the area allows for year-round recreation.

The byway's close proximity to countless cycling routes makes it a desirable destination for cyclists. The highway itself generally has generous shoulders and makes for a great bike ride.

Perhaps the best way to take in the immense scenic opportunities of the byway is to hike or ride horses right along the coastline. Coastal access adjacent to the southern boundary of the Monterey Bay National Marine Sanctuary, for example, gives you the opportunity to experience the magnificence of the Pacific Ocean.

The Harmony Coast contains unique opportunities to explore rocky coastal inlets by kayak. Just north of the California beach community of Cayucos on rural Route 1, rocky sections support some of the state's richest and most extensive tide pool habitat areas. Kayaking allows for in-depth exploration of these intriguing natural habitats.