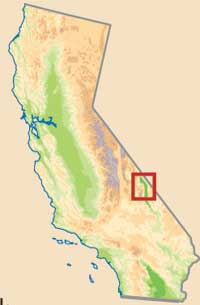 Located in one of the most remote parts of California, Death Valley Scenic Byway (Route 190), the gateway to Death Valley, attracts travelers from all over the world. International visitors see Death Valley as part of the grand tour of California -- more than 75 percent of the summer visitors in this area come from abroad. Even scientists and researchers come to study and explore the park's unique resources.

Archaeologists have found traces of distinct prehistoric cultures in Death Valley National Park. The first known inhabitants of Death Valley lived there some 7,000 years ago and were known as the Nevares Spring Culture. After another 6,000 years and many climactic changes, a new group of people entered the valley. This group came to be known as the Desert Shoshone and has been in the valley ever since.

The Desert Shoshone were distinguished by their production of superior arrowheads as well as their skills to make pottery. Their ingenuity led to constructing pits for storing mesquite beans, which were later ground and processed for the seed.

The Desert Shoshone moved about the Death Valley region, hunting sheep, deer, and rabbits when the animals were abundant. During other seasons, the people harvested plants and seeds. The Desert Shoshone had this wilderness to themselves until 1849, when emigrants from the east began to arrive.

A tale of the valley's history must include one brief but important period that started when some of the '49ers, who were heading for the California gold fields, took an ill-advised detour through Death Valley. This began the boom-and-bust era of Death Valley, a period that involved more bust than boom. Borax, the "white gold of the desert," was the only significant "gold" found in Death Valley.

Eventually, the prospectors lost hope of finding gold in the desert. Likewise, the miners eventually deserted their borax mines. In the 1870s, for example, Darwin was a thriving

mining town. Now, the historical city has but a few

Rhyolite, once the largest town in the Death Valley area

during the mining boom, is now home to a train depot, a jail,

a two-story schoolhouse, the ruins of a three-story bank building, and a house built completely of bottles. Skidoo was one of the last gold-mining camps in Death Valley. This ghost town is a marvel of mining engineering that existed from 1906 to 1922. Additionally, Twenty Mule Team Canyon displays an amazing number of old prospector tunnels.

Traveling on Route 190 from the west end of the park from Towne Pass to some 282 feet below sea level (the lowest spot in North America), this trip is highlighted by rugged natural beauty. You're afforded 80-mile views that include bare mountain slopes towering above huge alluvial fans.

Other highlights along the byway are salt-encrusted salinas created by evaporated water basins that accumulate salts, borates, and other minerals. Windswept sands across the valley floor form ever-changing patterns. Desert varnish, shiny black iron, and manganese oxide, which cover the cobbles, make an interesting mosaic of pavement.

With an average of 1-1/2 inches of rain a year and average high temperatures nearing 120 degrees during the summer, this region is one of the driest and hottest environments in the western hemisphere.

Passing from the lowest point to the highest summit, you traverse four major plant zones, each determined by climate and elevation. The diversity of plants along this drive ranges from Pinon pine and juniper in the upper elevations to the valley's mesquite, desert holly, and cacti. This complex ecosystem includes kangaroo rats, sidewinder rattlesnakes, burrowing owls, and bighorn sheep. Thousands of years of adaptation in the plant and animal species make this drive a fascinating experience.

One of the best ways to discover Death Valley National Park is to get out of the car and take a hike. Due to the extreme elevation changes and climate, however, many of the hikes within Death Valley may be too difficult for the average visitor, but several very easy to moderate hikes are accessible to just about everyone. When you do go for a hike, remember to drink two quarts of water. Sunglasses and a hat will help, too, because the sun often glares throughout the park.

Considerations: The best times to drive the Death Valley Scenic Byway are in the winter and spring, spring being the busiest. Be aware of extreme heat, lack of water, and occasional flash floods. Gas is available at Panamint Springs, Stovepipe Wells, and Furnace Creek. Access to Death Valley National Park can be limited by winter snowstorms, when traveling from the west over the Sierra Nevada in California on Routes 108 and 120 and on Route 160 from Las Vegas to the east in Nevada. Death Valley National Park charges an entrance fee, but it is good for an entire week.