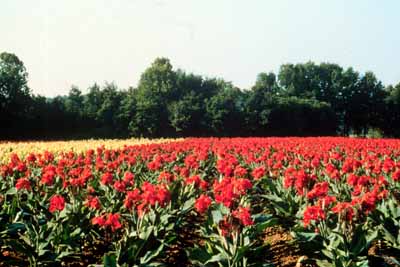 Although Crowley's Ridge Parkway is known for its Civil War sites, visitors also enjoy its beautiful topography and farmland scenes like this gladiolus field.

The scenic intrinsic qualities of Crowley's Ridge Parkway in Arkansas are associated with the natural plant communities found on the ridge, as well as the rolling topography, which creates picturesque and dramatic viewsheds. Spring and fall find their most dramatic expressions in the foliage, providing beauty and aesthetics. In addition, the proliferation of wildflowers and unique plant communities in the spring, summer, and fall are enhanced by the wildflower trail.

Though Crowley's Ridge Parkway has a variety of stories to tell, ranging from geologic to human, ancient to modern, this itinerary gives a taste of how the Civil War affected the Confederate state of Arkansas, bordering the Union-aligned Missouri, as both sides used the road on Crowley's Ridge.

Crowley's Ridge State Park: Crowley's Ridge State Park, though not having any particular Civil War sites, does give the visitor some spectacular bird's-eye views of the surrounding delta and an understanding of why this parkway was so important to travelers navigating the eastern edge of Arkansas. Campsites, picnic areas, and hiking trails along with year-round interpretive programs give visitors an opportunity to enjoy this park.

Forrest City: Farther south on the byway is the town of Forrest City, named for Confederate General Nathan Bedford Forrest. During the Civil War, soldiers stopped here near Stuart Springs, and those who were injured were treated in the spring's healing waters. Today Stuart Springs is a 16-acre park and is listed on the National Register of Historic Places.

Helena: The town of Helena, a picturesque town situated strategically along the Mississippi River, is at the southernmost part of the Crowley's Ridge Parkway and has several Civil War sites to visit.

Civil War Batteries: Helena was a Union stronghold coveted by the Confederates, and four Civil War batteries can be viewed by visitors.

Crowley's Ridge is geologically unlike anyplace else in the United States. It also occupies a unique role in telling the story of the War Between the States as it was fought on the battlefields