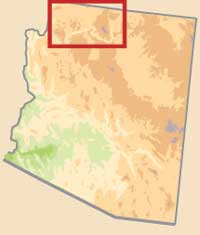 Along the route, you'll find plenty of places to hike and camp. Groves of golden aspen, flowery meadows, ponds, outcrops of limestone, and steep slopes on all sides break up the dominance of the regal coniferous forest. Also, the Colorado River flows right around the byway, so opportunities for water sports abound.

People have occupied the Kaibab Plateau for at least 8,000 years. The earliest people inhabiting this region were hunter-gatherers who utilized the plateau extensively for its big game opportunities and for plant and mineral resources. These people, referred to as the Archaic people, were highly nomadic.

Between 500 B.C. and 300 B.C., the life and methods of the people using the Grand Canyon area began to change. The first evidence of plant domestication is linked to this period. Archaeologists refer to the people of this era as the Basket Maker people. Although they still depended heavily on hunting and gathering, they were slowly incorporating horticulture into their lifestyle. The Basket Maker period lasted until around A.D. 800.

Toward the end of the Basket Maker period, pottery was made and people became less mobile. Over time, it is believed that the Basket Maker culture transitioned into what is now known as the Pueblo culture.

The Pueblo people abandoned the area by the late 1200s. Archaeologists are unsure why they left; they suspect that prolonged drought and increased population levels forced the Pueblos to leave.

The Paiute people moved into the area shortly after the Pueblo people left. These people continue to live in the area today. The Paiute people were a hunting and gathering culture that utilized the Kaibab Plateau for its wild plant andanimal resources. While some of the Paiute farmed in historic times, they were not originally a farming people.

As with the earlier archaic cultures, the Paiute were highly nomadic. Unlike the Pueblo people, whobuilt masonry pueblo structures, the Paiute lived in temporary brush structures called wikiups. This form of housing allowed them to move their camps on a regular basis to where resources were seasonably available.

The Paiutes gave the region the name we still use today; Kaibab is a Paiute term meaning "mountain lying down." Today, the Paiute live on the Kaibab Paiute Indian Reservation located near Fredonia. They continue to use the Kaibab Plateau for traditional cultural practices.

The rich cultural diversity of Arizona is proudly displayed on the Kaibab Plateau-North Rim Parkway. Here, you find a diverse cross section of Native Americans and pioneer stock. Visit the local towns of Kanab and Fredonia to see the rich heritage that is still maintained today. From good old country fairs to the vibrant Western Legends Round Up, everyone is sure to have a good time.

The Kaibab Plateau is rich with the history of preservation and conservation. In 1893, the Grand Canyon Forest Reserve was created, and in the first decade of the 20th century, national forests were designated.

The historic Jacob Lake Ranger Station was built in 1910 to help administer lands that included what is now Grand Canyon National Park. The ranger station is located along the road that originally led to the North Rim of the Grand Canyon.

View Enlarged Image Photographers, bird-watchers, hikers, campers, and anyone else who enjoys spectacular views can use this map to reach the Kaibob Plateau-North Rim Parkway.

Eventually, the road to Grand Canyon National Park was moved to its present location, but the Jacob Lake Ranger Station continued to be utilized to administer Kaibab National Forest lands. It is one of the oldest remaining ranger stations in the country and is now an interpretive site presenting the life of a forest ranger. It can be accessed from Highway 67.

After a devastating wildfire in 1910 burned through much of the Idaho panhandle and parts of western Montana, the United States ushered in an era of fire suppression. Prior to that time, little was done to suppress fires.

However, after 1910, fire lookouts and trail systems were developed in earnest throughout the national forest system. The earliest fire lookouts on the Kaibab Plateau consisted of platforms built at the tops of tall trees that were accessed by ladders. Eventually, lookout buildings and towers were built, including the Jacob Lake Fire Lookout Tower in 1934.The tower is located on the east side of Highway 67 and can be viewed from the Kaibab Plateau-North Rim Parkway.

The Kaibab Plateau could be called an island of forest; sage and grass cover the lower elevations that surround it. The plateau is bordered on the south by the Grand Canyon and on the east and west by the Colorado River, sometimes reaching elevations of 9,000 feet.

Within the forest are irregular areas entirely free of tree growth. These parks are found in canyon bottoms, dry southern exposures, and ridge tops near the forest's exterior limits. Naturally occurring water is scarce in the North Kaibab Ranger District. Melting snow seeps through the gravelly soil to emerge as springs several hundred feet below the plateau rim.

The Vermilion Cliffs are spectacular because of their brilliant colors. It is also thrilling to watch the Grand Canyon walls change color as the sun sets; watching the morning sun hit the canyon is just as unforgettable.

The Grand Canyon stands alone as the world's most awesome natural wonder, and the surrounding Kaibab National Forest offers plenty of native forest wildlife. Keep an eye open for large, soaring birds; the endangered California condor was recently introduced to this area.

For hunters, the Kaibab Plateau is famous for producing record-class mule deer, with established seasons for bow, black powder, and rifle hunting. Game birds, such as the chukar partridge and Merriam's turkey, also have established seasons. The Arizona Game and Fish Department sets the hunt dates and numbers, and hunters are selected by drawings.

The winter season on the Kaibab Plateau is a unique experience. Lodging is available on the plateau at Jacob Lake and Kaibab Lodge. Nordic skiing and snowmobiling are the most popular activities on the plateau in the winter.

On national forest lands, camping is not limited to campgrounds; instead, camping is permissible off of any dirt road or out of the sight of a paved highway at no charge. Backcountry camping is prohibited within 1/4 mile of water to allow wildlife undisturbed access. Backcountry campers also must stay at least 1/2 mile from a developed campground or other facility. Campers are also asked to stay out of meadows, due to the fragile environment.

Jacob Lake area campgrounds open in early May and close in late October. Forest Service and National Park Service campgrounds have water and toilets, but no RV hook-ups. Private campgrounds at Jacob Lake or off the plateau do have full RV hook-ups, however. Tents and RVs are welcome at all campgrounds. Demotte Park is not suitable for large RVs; all other campgrounds can handle any size. Group campsites are available by reservation at Jacob Lake and the North Rim.

The Forest Service campgrounds operate on a first-come, first-served basis, and reservations can be made at the North Rim and private campgrounds. The free Jacob Lake picnic area is open May 1 to November 1 during daytime hours. No fee is charged for camping at Indian Hollow Campground, but camping is primitive, and no water is available.

Time to Allow: One hour or more

States it runs through: Arizona

Considerations: All roads are winding and steep. Arizona's climate is dry and hot, so be sure to carry plenty of water. Wear proper footwear to minimize the risk of serious injury. There is also the danger of fires, lightning, and flash floods. Most roads are not maintained during the winter.

An awe-inspiring chasm formed over the millennia, the Grand Canyon provides ample opportunity to explore its amazing natural wonder.

In many areas along the Kaibab Plateau-North Rim Parkway, you can get out, stretch your legs, and take one of the trails to scenic overlooks in the Grand Canyon. The golden glow of the red rocks and the lonely sound of the wind in the early morning are enough to inspire the most inexperienced of poets. Be sure to bring a journal and a camera.

While visiting the Kaibab Plateau-North Rim Parkway, you can take the following self-guided tour of the byway.

Jacob Lake Junction: The Jacob Lake Junction is at highway marker 579 or the junction of Highway 67 and State Highway 89A. The Kaibab Plateau Visitor Centeroffers information and interpretive displays about the natural and cultural resources of the plateau.

Jacob Lake Fire Lookout Tower: Get to Jacob Lake Fire Lookout Tower on highway marker 580.3 or one mile south of the Jacob Lake Junction/Highway 67 and State Highway 89A.Visit this historic tower, and find out how fires are detected. Views of the Grand Staircase are visible from the tower. The tower is usually staffed during the day and may be closed for two days during the week; check in at the visitor center for current openings.

Demotte Park Overlook: Find this overlook at highway marker 604 or 22 miles south of the Jacob Lake Junction on the byway. Demotte Park is one of the largest meadows on the Kaibab Plateau, and it's filled with deer, coyotes, and numerous species of birds. Wildflower enthusiasts will also enjoy the diversity and abundance in this meadow. Near this stop is the historic Kaibab Lodge. Rustic cabins and a restaurant, gift shop, gas station, and convenience store are available.

Grand Canyon National Park-North Rim: Forty-four miles south on Highway 67, the end of this scenic parkway leads to a spectacular view of the North Rim of the Grand Canyon. Several hiking trails are located at or near the rim. The North Rim Visitor Center is open seven days a week 8:00 A.M. to 8:00 P.M. Information, interpretation, and interpretive sale items are available. The North Rim's Historic Lodge offers accommodations, restaurant, and mule ride.

Take a drive along the Kaibab Plateau-North Rim Parkway, and discover many archaeological, cultural, and scenic wonders, including possibly the most scenic wonder of all -- the Grand Canyon.