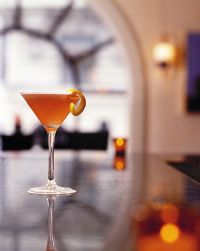 ©2006 istockphotos.com Looking for a martini? You can find one -- and other delights --  in San Francisco's bars.

When the San Francisco Rave scene died in the early 1990s, it left behind a lot of club kids with no real club scene. If you're looking for the huge, pumping nightclubs of New York, Chicago, or Miami, chances are you'll be disappointed here. That said, San Francisco does offer its own unique and completely entertaining brand of nightlife, dominated primarily by live entertainment.

First, there are the music festivals: indie rock, hip hop, jazz, bluegrass -- there seems to be a San Francisco festival for every genre of music. Then, in addition to a few huge stadium venues, there are the dozen or so medium-size concert venues, perfect for seeing anything from a big national star to your favorite local band, and they're joined by about 20 or so bars and pubs that offer live music shows most nights of the week.

Despite the lack of a big-time club scene, there are still a handful of talented DJs in San Francisco who spin at the city's handful of medium-sized clubs, and occasionally at a not-so-secret warehouse party.

Another staple of the San Francisco nightlife scene: the local dive bar. All those unique, well-defined neighborhoods have their local watering holes, where you'll see the neighbors sipping Pabst Blue Ribbon at least a few nights a week.

Insider's Guide: The Best of Nightlife & Entertainment in San Francisco

Insider's Guide: The Best of Nightlife & Entertainment in San Francisco

Noise Pop introduces San Francisco hipsters to new indie bands at the end of every winter (late Feb-early March), the North Beach Jazz Festival brings top talent to the cafes and bars of North Beach for one week in July, and the jazz scene really heats up in late October to mid-November with the legendary San Francisco Jazz Festival.

The free (Hardly) Strictly Bluegrass Festival brings the likes of Emmylou Harris and Willie Nelson to Golden Gate Park every year.  There are free outdoor concerts at Stern Grove -- a beautiful redwood grove near SFSU in the Outer Sunset -- every weekend during the summer.

Though the music festivals bring more acts to the city at one time than usual, you can catch a wide variety of live music any night of the week at classic San Francisco venues like the Warfield (982 Market St), Great American Music Hall (859 O'Farrell St), Bimbo's (1025 Columbus Ave), and The Fillmore (1805 Geary St).

Salsa fans dance the night away any day of the week at CafeCocomo (650 Indiana St), El Rio (3158 Mission St), or Roccapulco (3140 Mission St), and jazz fans can choose from any number of intimate clubs in North Beach or Fillmore, or hop across the Bay to the infamous Yoshi's (510 Embarcadero West, Oakland).

There are bars and restaurants in every neighborhood, but a few parts of the city are particularly well suited to bar-hopping. Try Union Street (in the Marina), the Mission, the Tendernob, the Haight, and 9th Street in the Inner Sunset. Each has a fairly distinct clientele -- the Mission attracts mostly hipsters and arty types, the Marina attracts a more clean-cut crowd, and the Inner Sunset caters predominantly to students. The Tendernob and the Haight are sort of catch-alls with a mix of dance clubs, dive bars, live music venues, and lounges.

The majority of the city's clubs are located South of Market in the SoMa District or Potrero Hill (further south of Market than SoMa, in between the Mission and the DogPatch), where they can find spaces big enough, with the exception of Ruby Skye (420 Mason St) and the Starlight Room (450 Powell St), both of which are in the Union Square area.

In contrast to these high-energy scenes, San Francisco also offers some great "chill" activites. Learn about kicking back and letting off steam on the next page.