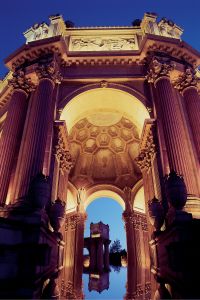 You can't walk two blocks in San Francisco without seeing an architect's office, and you can scarcely walk a block without passing a landmark building. This city lives and breathes architecture and design, from the sweet Victorians around Alamo Square to the TransAmerica pyramid to the super-modern Herzog and DeMeuron stunner that is now the De Young Museum.

Like most other American cities, Art Deco left a big mark on San Francisco, evidenced by much of the architecture downtown and in the Marina District, and, like every other aspect of the city, San Francisco's architecture has been influenced by its international population from the super-authentic Japanese Tea Garden in Golden Gate Park to the gates bordering Chinatown to the mural-covered walls of the Mission.

Insider's Guide: The Best of Architecture & Landmarks in San Francisco

Lombard Street is not actually the crooked-est street in the world, or even in San Francisco for that matter, but it doesn't stop it from being a landmark. You'll learn this and other fun facts through a handful of free, architecture-specific guided walking tours offered by the San Francisco Public Library (100 Larkin St).

Though not technically a museum, Limn (290 Townsend St), an interior design store in South of Market may as well be. The store is worth a visit if only to see its huge steel doors and gawk at the ridiculously pretty modern furnishings inside.

The Haas-Lilienthal House (2007 Franklin St) is one of few San Francisco Victorians that you can tour inside and out. For those planning an event in the city, this historic home also can be rented for dinners, retreats, or weddings.

San Francisco is home to several modern landmarks and landmark-buildings-in-progress -- Renzo Piano designed the California Academy of Sciences being built in Golden Gate Park, Daniel Libeskind designed the Contemporary Jewish Museum being built on Mission Street around the corner from Museum of Modern Art, Thom Mayne designed the new "green" Federal Building being built South of Market, and Herzog and DeMeuron designed the new DeYoung Museum. Rem Koolhaas also designed a Prada store for San Francisco before the label decided to hold off on expanding its retail empire.

There are also a handful of stunning churches dotting San Francisco's hills, including Grace Cathedral (1100 California St), which is the largest Gothic structure in the West on Nob Hill. The Swedenborgian Church in the Marina (2107 Lyon St) built in 1895 is considered one of California's earliest pure Arts and Crafts buildings. Mission Dolores in the Mission (3321 16th St) is the oldest building in San Francisco).

The cable cars and Market Street's restored street cars are San Francisco landmarks in their own right, and several San Francisco hotels are considered historical landmarks. If you have brunch at the Palace Hotel (2 Montgomery St), you'll be eating where its first guests used to park their carriages.

In addition to San Francisco's architectural wonders, visitors will find ample shopping opportunities. Whether you're seeking high fashion, unique interior design, or vintage threads, you'll have plenty to choose from. Move onto the next section to read our insider's guide to shopping in San Francisco.