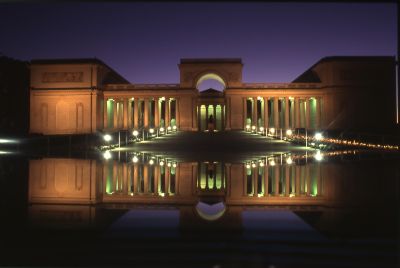 ©2006 Jerry Lee Hayes The Legion of Honor houses a collection of 4,000 years worth of ancient and European art in an exquisite Beaux-Arts building

San Francisco has a reputation as an artsy city, and for good reason. Four major art museums, a handful of smaller museums, and dozens of galleries present a dizzying schedule of exhibits ranging from world-famous stars like Matthew Barney at the San Francisco Museum of Modern Art (MOMA) to up-and-coming local artists at the tiny but amazing Jack Hanley Gallery in the Mission.

The city is home to a number of formal concert halls where classical and jazz legends perform on a regular basis. Several theaters are spread throughout the city to accommodate one of the nation's largest dramatic communities, and San Francisco is also home to a variety of unique movie theaters -- the Castro, the Red Vic, the Roxie, and the Parkway across the Bay in Oakland.

Every year the San Francisco Film Festival screens films from all over the world in the city's theaters, as it has done for nearly 50 years. Long a center of literary activity, it's a little-known fact that most author book tours begin in San Francisco at any of a number of fantastic bookstores.

Insider's Guide: The Best of Arts & Culture in San Francisco

Insider's Guide: The Best of Arts & Culture in San Francisco

The San Francisco Museum of Modern Art (MoMA -- 151 Third St) has long been the city's most popular art museum, but there are a number of other museums within the city's limit that are equally worth an afternoon trip.

Yerba Buena Gardens (760 Howard St), next door to the MoMA, hosts several interesting exhibits every year, in addition to the rotating collection of sculptures in its outdoor garden, and a variety of performances in its theaters (ranging from musical to dance to dramatic).

The fabulous DeYoung Museum in Golden Gate Park is worth a visit for its newly renovated building alone.

The Legion of Honor (100 34th Ave) has a revolving exhibition schedule of classic, fine arts (film lovers should visit to wander through the same halls Janet Leigh visited in the film Vertigo).

The new Asian Art Museum (200 Larkin St) in the Civic Center always has a mix of modern cultural exhibits and historically intriguing collections.

The California Academy of Sciences is in a temporary home on Mission Street near 3rd while it waits for the completion of a fabulous new Renzo Piano-designed building in Golden Gate Park. The facility is great fun, especially for kids, as is the Exploratorium (Palace of Fine Arts, 3601 Lyon St), which allows visitors to really get into science and figure out how things work.

In addition to the museums, San Francisco has a number of private galleries that regularly host exhibits of everything from Impressionist Painters (Christopher Clark Fine Art -- 377 Geary St) to photography (Fraenkel Gallery -- 49 Geary St) to the work of up-and-coming and successful local artists (Jack Hanley Gallery -- 395 Valencia St; Hang Art -- 566 and 567 Sutter St).

The theatrical community is alive and well in San Francisco, with dozens of productions playing every couple of weeks, ranging from award-winning plays at the renowned American Conservatory Theater (415 Geary St) in Union Square to quirky one-woman shows at Theatre Rhinoceros (2926 16th St) in the Mission.

As you explore some of San Francisco's art collections, you may notice that the buildings that house them are especially spectacular, like the Legion of Honor pictured above. In the following section, you'll learn about San Francisco's architectural treasures, which range from classical Roman (Palace of the Fine Arts) to ultra-modern (DeYoung Museum).