Getting In, Getting Around San Francisco 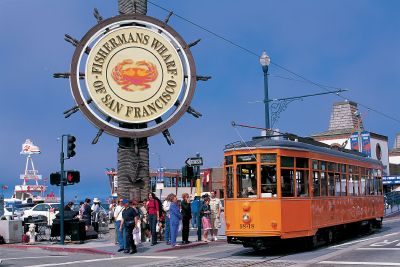 ©2006 Jerry Lee Hayes San Francisco's iconic cable cars are a great way to get across town while taking in the sights -- just be aware of the $5 per ride fee!

Rental car: Alamo, Avis, Budget, Dollar, Enterprise, Hertz, National, and Thrifty car rental counters are located on the fourth floor of the San Francisco Airport Rental Car Center, which can be accessed via the terminal's AirTrain, on the Blue Line. AirTrain, SFO's fully automated people-mover system, operates 24 hours a day and provides convenient and frequent service throughout the airport. AirTrain stations are located in all terminals, parking garages, the Rental Car Center and the airport's BART station.

At Oakland International Airport, Alamo, Avis, Budget, Dollar, Enterprise, Hertz, National, Fox, and Thrifty have desks at the Rental Car Center, which is a few miles away from the terminal. Rental Car Center shuttle buses operate every 10 minutes during the day and "on demand" between 1:30 am and 4:30 am. While the Rental Car Center is open 24 hours a day, travelers should check with their car rental agency's reservation center for hours of operation at Oakland Airport and make arrangements for special arrival and departure requests.

At Mineta San Jose International Airport, each terminal has a clearly marked Rental Car Shuttle stop. The shuttles provide regular transportation to and from the terminals and the Rental Car Center daily from 4 am to 12:30 am. Should you arrive during off-hours, call (408) 277-3661. Alamo, Avis, Budget, Dollar, Fox, Hertz, National, Payless, Enterprise, and Thrifty all operate out of the airport's Rental Car Center.

Taxis: You can take a taxi from the San Francisco Airport to most locations in the city for between $40 and $50. The taxis are located outside each terminal's arrival area in the lower level. Since public transportation doesn't serve certain areas well (the Richmond, Pacific Heights, Nob Hill, North Beach, or the Marina), travelers to these areas should plan on taking a cab to and from the airport.

Two cab companies service Oakland Airport and it will cost you between $50 and $60 to get to San Francisco.

At San Jose Airport, taxis are located near the Terminal A lower-level parking garage and curbside on the east end of Terminal C's baggage claim area. Expect to pay a little more since San Francisco is an hour away.

Public transportation: From San Francisco International Airport, you can take the Bay Area Rapid Transit (BART) subway system directly from the terminals into either downtown or the Mission. From BART transfer stations, you can take the Muni, a light rail transit system, which will get you to Duboce Triangle/Upper Market, South of Market/China Basin, Inner and Outer Sunset, Noe Valley, Cole Valley, and the Haight. When transferring between BART and Muni, just ride the escalator up one level and hop on a train. (Keep in mind that the locals just call it BART!)

From the Oakland Airport, the AirBART bus will take you from the airport to the nearest BART station for $2, but it's a little unreliable so you may have to wait awhile. Don't trust it on your way back, though, or you might miss your flight. If you want to stick to public transportation, you could feasibly take BART downtown ($5) and then grab a cab (there are plenty to be had on and around Market Street).

From San Jose Airport, you can take the Santa Clara Valley Transportation Authority Airport Flyer bus from the airport to either the Metro Link light rail station, where you can catch a train to the Civic Center and then an express bus to a BART station, or to the Santa Clara Caltrain Station, where you can catch a train to San Francisco. There are almost always cabs waiting in front of the station when you arrive and it's in a safe neighborhood (China Basin).

Shuttles (vans you share with others) are another option. From San Francisco Airport, a door-to-door shuttle will take you directly to your hotel for about $15.

The best deal going from Oakland Airport are the door-to-door shuttles, which will take you anywhere in the city for about $22. You can book a BayPorter Shuttle online (at least 48 hours in advance) for a discount at the company's Web site.

There are also door-to-door shuttles at San Jose Airport, which will charge from $69 to $79 to take you into the city (remember, it's at least an hour away).

When you're leaving, keep in mind that public transportation in San Francisco doesn't operate from 12:30 am to 6 am. If you have an early flight, you may have to make other arrangements.

Rush hour: Rush hour into the city from San Francisco Airport (SFO) and San Jose Airport (SJC) starts at around 3:30 pm. From SFO that's less than an hour stuck in traffic, but from SJC you could feasibly be stuck in it for 2 hours or more, so it's something to consider.

From Oakland Airport (OAK), it's a reverse commute over the Bay Bridge, but you have to get through most of Oakland first and could hit a bit of traffic -- still, it's nowhere near what you'll hit in San Francisco or San Jose.

If you come to the city in the morning, you'll be fine from all of the airports. When you're leaving, if you're flying out of SJC you might want to get a hotel next to the airport if you have a morning flight -- morning rush hour is brutal from the city down the peninsula. It can be bad to SFO as well, so be sure to leave yourself some extra time for traffic if you're going to the airport between 7:30 and 9 am.

Rules of the road: Whether you rent a car from the airport or drive in to San Francisco in your own car, make sure you have a map of both the region and a detailed map of the city. The freeways crisscross over each other and there will be construction on them for at least another couple of years, so exits appear and disappear and bridges are shut down some nights.

The Bay Bridge is being rebuilt at the moment, so be sure to check the project's Web site for an updated construction schedule before planning a trip that involves crossing it.

Most tourist attractions and neighborhoods are well marked by signs throughout San Francisco. Locals, cab drivers, and bus drivers are usually happy to help with directions if you get lost, as are the employees and owners of most stores. Driving a car is a hassle in this town, and everyone knows it, so don't be timid about asking for directions.

Public transportation, fares: San Francisco public transportation is great, except that it doesn't quite reach every single neighborhood. The city's trying to do something about that, but until it does, you can take the Bay Area Rapid Transit subway system (BART) to and from the Mission, downtown/Financial District/Union Square, the Embarcadero, to the South Bay as far as Fremont, and on over to the East Bay well past Oakland into Walnut Creek. BART fare depends on where you start and where you're going, but it starts at $1.40 and goes up to around $7 for the longest distances (SFO to Walnut Creek, for example, which is over 60 miles). Discounted tickets for senior citizens and children can be bought online.

You can take Muni, a light rail transit system, to and from downtown/Financial District/Union Square, South of Market (SoMa), China Basin, Embarcadero, the Castro, Duboce Triangle, the Mission, Noe Valley, Cole Valley/Haight Street. You can take a Muni Bus anywhere you want in the city. If you find the bus route map confusing, just ask the driver -- they're used to it and usually happy to help. Buses tend to run a little behind schedule, and then come one right after the other for some reason. Bus and/or Muni fare with a transfer (either to a different bus/train or from a bus to a train and vice versa) are good for two hours (though they usually let you push it), and costs $1.50.

The cable cars and street cars are another option -- cable cars service Russian Hill, Nob Hill, Chinatown, North Beach, Fisherman's Wharf, Downtown/Union Square/Financial District, and Pacific Heights; the street cars (retired train cars brought over from Europe and refurbished as light rail trains) run up and down Market Street from Castro down to the Embarcadero. Street cars are the same price as buses and trains -- $1.50 including transfer. Cable cars are far more expensive at $5 per trip (one-way, no transfer).

A great way to save on public transportation while you're in town is to buy a City Pass, which gets you access to several attractions plus a seven-day Muni and Cable Car pass for $49. You can also buy a Muni Passport that includes Cable Car access -- one day for $11, 3 days for $18, and 7 days for $27.

Taxis, on foot, or by bike: For whatever reason, taxis are expensive in San Francisco. Basically anywhere you need to go in the city, even if it's just one neighborhood over, it always costs at least $10, and usually $15.

Walking is the best way to get around the city and to really see it, but certain areas are dangerous at night (see the Fast Facts safety section).

Biking is also a great option, and you can take your bike on all public transport, except at rush hour (7 to 9 am and 5 to 7 pm). Just be careful and be sure to wear a helmet -- there's a strong bicycle coalition in San Francisco that has done well advocating for biking rights, bicycle lanes, etc, and a general respect for cyclists, but it's still a busy city with a lot of not-so-great drivers.

Now that we've covered the basics of getting around in San Francisco, we'll move onto the things to do. The next section introduces the city's myriad of festivals, as well as some popular attractions for visitors.