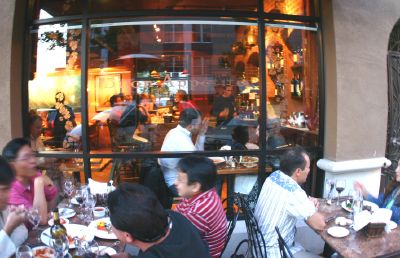 Being so close to the border, it's natural that San Diego would be known for its excellent Mexican food; and it's true that there's a taqueria on most every corner. For example, the El Zarape Mexican Restaurant (4642 Park Blvd, 619-692-1652) serves a sinfully good scallop burrito.

But don't think this town's culinary panache stops with pico de gallo. Several sushi spots and other restaurants take good advantage of the fresh catches coming in from the Pacific each morning. Zenbu Sushi Bar and Restaurant (7660 Fay Ave) serves a great house roll and whatever sashimi's the freshest. The Oceanaire Seafood Room (400 J St) serves a halibut that's superb any way they prepare it.

Most every neighborhood has an annual food event during which area restaurants offer tasting samples. Downtown is known for its many Italian joints, like the gorgonzola-pesto gnocchi at De Medici's (815 5th Ave) is some of the best in town. Try the Branzino sea bass in morel mushroom sauce at Buon Appetito (1609 India St).

North Park boasts cuisine ranging from Russian to Lebanese as long as you fit in a trip to the gym, you can't go wrong with beef stroganoff from Pomegranate (2302 El Cajon Blvd).

Vegetarians and vegans are well served in San Diego, especially in hippyish Ocean Beach, where the People's Organic Co-Op (4765 Voltaire St) and Ranchos Cocina (1830 Sunset Cliffs Blvd, 619-226-7619) serve up lots of delicious options like soyrizo burritos and spicy tempeh. Elsewhere, Pokez Mexican Restaurant (947 E St), Jyoti-Bihanga (3351 Adams Ave) and Spread The Restaurant (2879 University Ave) also make meatless magic. As a rule, true foodies should avoid the fancy waterfront joints in La Jolla and downtown, where you pay for the view, not the grub.

Tipping in San Diego is technically the same as elsewhere in the country, meaning 15 to 20 percent. Stay closer to 20 percent if your service was decent; it'll go a long way toward helping your server recoup a little bit of that "sunshine tax."

There's so much to do in San Diego, but how will you fit everything into your trip? We provide the answer on the next page, with a series of suggested itineraries.