Getting In, Getting Around San Diego 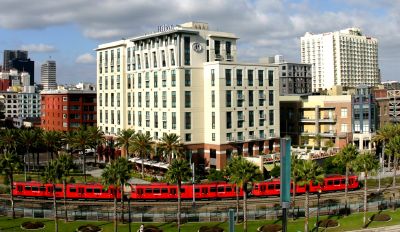 You have several options for getting around San Diego, including buses, trolleys, and the "Coaster" train system. Driving in this city can be a bit of a challenge -- if you're planning to drive, you'll want to watch out for heavy traffic. The following San Diego transportation primer won't ease the traffic, but it might make it a little easier to work your way around it.

Rental car: All car rental agencies are located off-site, so you won't find any service counters at the San Diego International Airport, which is sometimes called Lindbergh Field. You can, however, use the car rental reservations boards and courtesy phones located near the baggage claim areas in Terminals 1 and 2. Free shuttles operate every few minutes from the airport's Transportation Plazas to off-site rental offices for most major companies (Avis, Alamo, Hertz, Enterprise, Thrifty, etc.).

Taxi: If you need a taxi at San Diego International Airport, simply follow the signs leading to the airport's Transportation Plaza, where a coordinator will place you in the first available taxi unless you specify a particular taxi company.

The airport is centrally located near the center of downtown, making it a fairly inexpensive cab ride to wherever you're going. Cab fares may vary but generally start with a $2.20 flag-drop charge and an additional $2.30 per mile. Most cabs have a limit of four passengers. The average cab fare from the airport to the Gaslamp Quarter is about $10.

Public transportation: If you're bent on taking public transit from the airport, you can catch a bus called the MTS Flyer Route 992 to connect to the trolley, Amtrak, or the Coaster rail services at the Santa Fe Depot downtown. The Flyer costs $2.25 and runs every 10 minutes between 5 am and 12:50 am.

The bad news is that not many public transportation options are available between the airport and downtown San Diego, so your only other option is to use a courtesy van (check to see if your hotel operates its own free shuttle).

Rush hour: If you're new to San Diego and you're planning on driving, make sure your glove box is stocked with a map -- it'll help you navigate the city's knot of freeways. Though major landmarks are generally well marked and freeway signs are usually easy to find and follow in the downtown and beach areas, if you venture beyond the central core it's easy to get turned around. Know this: in most cases, even-numbered freeways run east-west, odd numbered ones go north-south. And several neighborhoods follow an alphabetized city plan, with streets in one area named according to some theme -- trees, birds, gemstones -- and proceeding in alphabetical order.

You'll find fairly heavy traffic on southbound and westbound freeways in the morning (7 to 9 am), and northbound and eastbound routes after work (4:30 to 6 pm). The narrow Highway 163 leading into downtown gets very slow on days when the San Diego Padres play home games at downtown's Petco Park.

Rules of the road: To put it delicately: San Diegans won't be winning any "World's Best Driver" awards anytime soon. Speeding, fender-benders and sudden, unannounced six-lane changes are all entirely too common. Be vigilant and brush up on those defensive driving skills before getting behind the wheel in San Diego.

The Trolley is actually an above-ground rail line with three routes: the Blue Line (Qualcomm Stadium to San Ysidro Transit Center), the Orange Line (downtown to El Cajon), and the Green Line (Old Town to Santee via San Diego State University). Fares are $1.25 to $3 each way, depending how far you go.

The Coaster is a train that runs from Oceanside to downtown San Diego. Fares cost $4 to $5.50 each way depending on the distance traveled.

Buses run throughout the city and fares cost $1.75 to $2.25; the best way to figure out routes, stops, and schedules is to call the Metropolitan Transit System at (800) 266-6883 or use the online trip-planner feature.

The Coronado Ferry runs between downtown's Broadway Pier and the Ferry Landing in Coronado every hour on the hour from 9 am to 9 pm (later on Friday and Saturday nights), and costs $2 each way. For ferry info, call (619) 234-4111.

Taxis, on foot, or by bike: Cabs are available to pick you up and take you anywhere, but outside of downtown they don't really patrol a regular route, so you'll have to call for one. And since the city is so spread out, biking and walking aren't a good idea unless you plan to stay in one specific area. Cab rates can vary but generally start with a $2.20 flag-drop and an additional $2.30 per mile thereafter. Most cabs have a limit of four passengers, though you can request a larger taxi van.

Downtown, the waterfront, and certain neighborhoods like Pacific Beach, La Jolla, and Hillcrest are pedestrian-friendly, with lots of restaurants, bars, and shops making them well-suited for strolling. And for a scenic stroll in the city, Balboa Park's grassy expanses are rivaled only perhaps by the picturesque downtown skyline as seen while meandering unhurriedly down the waterfront.

The long paved boardwalk that runs the length of Mission Beach and circles Mission Bay is ideal for biking, rollerblading, or skateboarding. Just be sure to pay attention to the signs painted on the pavement indicating which lane to be in (there are different lanes and speeds for bikes and pedestrians) and which direction traffic is flowing.

Once you get your bearings, you can begin to enjoy this wonderful city. San Diego has year-round entertainment, professional sports, live music, and lots of outdoor recreation. On the next page, we'll explore the special events and attractions in San Diego.