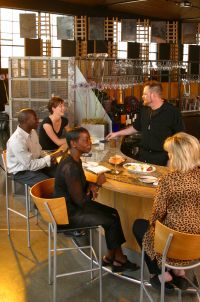 ©2006 The Salt Lake Convention & Visitors Bureau/Eric Schramm Salt Lake City has a surprisingly wide selection of places to enjoy a drink and a few laughs.

Utah's much-maligned liquor laws are easy to navigate with just a few tips. Most restaurants serve beer, wine, and hard alcohol just like restaurants in other major American cities. Utah's bars are called private clubs, which implies that they're difficult to get into but they're not. With a $4 temporary, three-week membership (think of it as a long-lasting cover charge), visitors can get into virtually any club. With the membership, you can bring along several friends for free.

Those who aren't into the bar scene can find hours of fun and entertainment at movie theaters, comedy clubs, or the Utah Fun Dome (4998 S 360 W Murray), home to bowling, roller skating, arcades, miniature golf, and rides.

Although Salt Lake City doesn't have a specific entertainment district, there are dozens of clubs, restaurants, theaters, and other nightlife options throughout the convention district and city center if you know where to look.

Salt Lake has dozens of outstanding restaurants. The city is also home to a very comprehensive wine shop, run by the state, called, The Utah Wine Store (255 S 300 East), with more than 3,000 varieties and 30,000 bottles in stock. There are also dozens of other liquor stores that sell beer, wine, and harder stuff, and most grocers and convenience stores stock beer.

If you want a larger pour in a private club, order a "side car," a one-ounce shot that can be added to any drink. Many of Salt Lake's local brews are national champions and include labels from Wasatch, Uintah, and Squatters Brewing. Sample a local ale for an unorthodox taste of Salt Lake City.

Two Sunday brunch options stand out. The Mobil Four-Star Grand America, (555 S Main St) pulls out all the stops with sushi, seafood, and an almost overwhelming assortment of other brunch choices served in a glistening marble-and-crystal-filled dining space.

The best way to experience the legendary Mobil Three-Star La Caille Restaurant (9565 Wasatch Blvd) is in the foothills near Little Cottonwood Canyons. The faux French chateau is justly more famous for its scenery than its food. But brunch is a delightful way to experience all the benefits of the stunning grounds, at a lower cost than the steep dinner prices.

For a truly memorable evening, book early and plan to stay late at Solitude's Yurt (12000 Big Cottonwood Canyon). Open only during the ski season, the Mongolian tent hidden deep in the Wasatch Forrest is approachable only on cross-country skis and snowshoes. Diners boot up and then enjoy a five-course gourmet dinner cooked on a wood-burning stove.

If you'd rather enjoy the outdoors than a hopping nightlife, Salt Lake City is the perfect place for you. There are dozens of ways to relax and unwind in Salt Lake City, many of which involve the valley's beautiful natural surroundings. Learn about some of the best options on the next page.