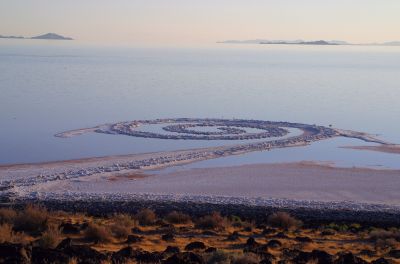 ©2006 The Salt Lake Convention & Visitors Bureau/Eric Schramm This unique piece of moder art -- the Spiral Jetty -- was completed by artist Robert Smithson in 1970.

During their western trek, the Mormon Pioneers kept spirits high by singing and dancing at the end of a long day. And their enthusiasm for music and culture didn't end when they reached their new home. Salt Lake City's populace has always supported the classical arts, and in recent years the city has shown an increasing appreciation for modern and cosmopolitan fine art as well. Dozens of museums and galleries showcase local and regional artists' works, and the city is home to modern dance troupes and other avant-garde performance artists.

In 2002, the most recent addition to the Rose Wagner Performing Arts Center (138 W 300 South St) opened after a donation from local philanthropist I.J. Wagner. The architecturally stunning facility hosts dance, theater, and music performances throughout the year.

The Utah Opera Company shares Capitol Theatre (50 W 200 South St) with Ballet West, one of the West's most lauded dance troupes. The renaissance-styled theater was home to vaudeville shows and is on the National Register of Historic Places.

The choir also holds regular public rehearsals on Thursday nights. The organ that accompanies the famous chorus is comprised of more than 11,000 individual pipes, making it one of the world's most complex musical instruments.

The celebrity-studded Sundance Film Festival is centered in Park City every January, but nearly half of the movies are screened in Salt Lake City and other communities. You can avoid the invasion of "people in black" who descend on the mountain village from Los Angeles by viewing Sundance movies outside of Park City. And much of the festival hype dies down after the first week.

Perhaps the most celebrated piece of modern art in Utah is Robert Smithson's Spiral Jetty, situated in an isolated corner of the Great Salt Lake. Smithson completed the project in 1970, and it's now praised as his masterwork and a paragon of the modernistic earthworks that he championed.

The jetty is comprised of black basalt rocks and juts out 1,500 feet into the shallow rose-colored waters, only to curl back on itself creating a primeval spiral. When the lake is low, it's possible to walk the entire 15-foot-wide jetty, but the waters rise and fall frequently and it's sometimes completely submerged.