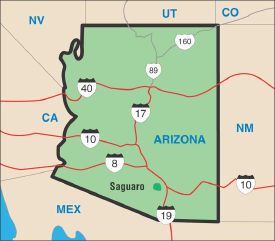 Just because it's one of the newer national parks (established in 1994) doesn't mean Saguaro National Park has less to offer.

One of the few major parks located in the suburbs of a sizable city -- in this case, Tucson, Arizona -- it is a veritable desert wonderland, with amazing saguaro cacti interspersed with other Sonoran desert flora such as hedgehog cacti, ocotillo, and prickly pear. While most visitors see the park from the luxury of their cars in order to beat the desert heat, the more adventurous will find more than 150 miles of hiking trails.

Saguaro National Park takes its name from the saguaro cactus, the giant, many-armed symbol of southern Arizona's Sonoran Desert. Standing as high as 50 feet and weighing as much as ten tons, these silent, slow-growing sentinels are a vital link in the ecology of one of the richest and most varied deserts in the world.

The park is divided into two units on either side of the city of Tucson: Saguaro East sprawls across 67,293 acres, including much of the rocky Rincon Mountains, which peak at an elevation of 8,666 feet.

Saguaro West takes in 24,034 acres and is bordered on the south by the lower, gentler Tucson Mountains. Adjoining portions of Coronado National Forest and Tucson Mountain County Park extend the protected area to more than 200,000 acres.

Ready to explore the desert in all its glory? Take a look at the next page for some sightseeing tips. 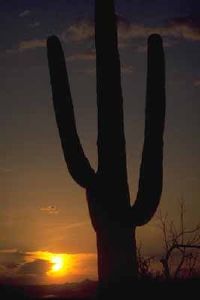 ©2006 National Park Services Giant saguaros are silhouetted by the warm glow of sunset, when the desert's many nocturnal creatures emerge from their hiding places to search for food.

For many visitors, Saguaro National Park is their first and only close view of the true Sonoran Desert. The park is a superb place for that introduction.

The saguaro cactus, both aesthetically and biologically, forms the centerpiece of the desert and of the national park. Each giant cactus supports a whole community of animals, including ground-dwellers such as rodents, insects such as honey bees and harvester ants, and songbirds such as the cactus wren, Gila woodpecker, elf owl, gilded flicker, and Lucy's warbler.

Scenic drives and a network of trails at both Saguaro East and Saguaro West are designed to acquaint visitors with the park's varied geology and wildlife, ranging from the pine forests atop the 8,666-foot Rincon Mountains to the classic desert scenes of cactus and creosote bush at lower elevations.

Much of the best hiking in Saguaro is in the eastern portion of the park, where there are more than 150 miles of hiking trails. Most desert aficionados agree that the best time to hike in the Sonoran desert is in late March to early May when the wildflower displays are at their peak.

Special attention is paid to the saguaro forest itself, which tends to be concentrated on the rocky slopes, or bajadas, at the base of desert mountains. The giant saguaro cacti do not typically blossom until late May or early June, however.

Casual visitors should note that the best time for hiking is early morning or evening, when the sun is low on the horizon and shy desert animals such as coyotes, javelinas, and seldom-seen bobcats are busy looking for food.

In addition to getting some cool shots of saguaro cacti, you'll want to be sure to stop at these sites to take a picture or two:

©2006 National Park ServicesAlthough dominated by towering saguaros, the Sonoran Desert is home to a variety of vegetation, including hedgehog and prickly-pear cactus, spindly ocotillo, ubiquitous creosote bushes, and the notoriously prickly cholla cactus.

You could spend all day just learning about the habitat of the saguaro cactus and other desert life -- or you could read the next page for an overview. 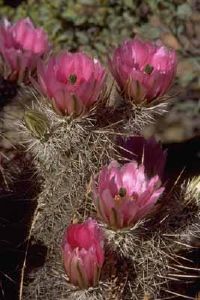 ©2006 National Park Services Colorful saguaro blossoms open after sunset every evening, only to wilt the next day. Bees and other insects feast on the flower's nectar, as do longnose bats, white-winged doves, and other animals.

With less than 12 inches of rain per year and high temperatures in the 100s, survival in Saguaro National Park, which is part of Arizona's Sonoran Desert, requires special adaptations to heat and drought.

The saguaro cactus, for example, has a long network of roots that grow close to the surface and soak up moisture during brief, infrequent showers. Water is stored in the saguaro's gelatinous tissue which, when fully expanded, can hold as much as 200 gallons. Thick, waxy skin minimizes evaporation, as does the absence of leaves. The plant's notorious spines repel thirsty animals, provide shade, trap cool air, and protect it from drying winds.

Many animals avoid the intense heat by hunting or gathering food only at night or, like the roadrunner and Gila Monster, during the cool hours of dawn and dusk. Birds such as the Gila woodpecker and gilded flicker make holes in the saguaro itself, using the burrows as protection against both searing heat and biting winter cold. When the original occupants move out of the holes, any of several other bird species move in, including cactus wrens, American kestrels, screech owls, and western kingbirds.

The jackrabbit employs quite a different method to stay cool. It uses its prominent ears as radiators, ridding itself of excess heat directly through the skin. Perhaps the most intriguing adaptation is that of the kangaroo rat, which is able to survive a drought by drawing all the water it requires from seeds.

Humans have also learned to survive in the Sonoran's harsh climate. Native Tohono O'odham Indians -- descendants of the ancient Hohokam Indians whose archaeological remains are scattered throughout the desert -- still harvest the succulent fruit of the saguaro for a variety of foods such as jam, syrup, and ceremonial wine. They also use the seeds of the saguaro and, after the cactus dies, the strong woody skeleton that holds it erect.

First-time visitors often expect the desert to be unrelentingly hot. But the weather at Saguaro National Park is actually quite variable. While daytime temperatures in summer regularly soar above 100 degrees, nights can be as much as 20 degrees cooler.

Temperatures sink well below freezing in winter, and snow is not uncommon, especially at the higher elevations. Perhaps the best time to visit is from October to April, when daytime temperatures hover around the 60s and 70s.

Climate varies significantly by elevation, too, tending to become cooler and wetter the higher one climbs. By hiking up the Rincon Mountains, for example, one passes through several distinct plant communities, rising from the low desert scrub inhabited by the saguaro forest to the mid-range oak and pine woodland. At the highest elevations, there are stands of ponderosa pine and Douglas fir that are similar to the forests of the northern United States.

©2006 National Park Services Saguaro National Monument was set aside in 1933 to protect a forest of mature saguaros. It was expanded several times and redesignated a national park in 1994.

Life in the Arizona desert is quite different than the one you lead, but that's what makes it interesting to study. Visit Saguaro National Park and get a great introduction to how plants and animals not only adapt to this habitat but grow and thrive.