What types of African safaris are available today? 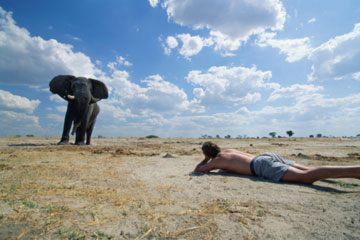 A safari participant lines up a dramatic camera shot of an elephant in Africa.
Michael Melford/The Image Bank/Getty Images

Obviously a lot has changed since Teddy Roosevelt's day. With Africa's exotic wildlife increasingly threatened by loss of habitat, poaching and climate change, today's environmentally-conscious visitors tend to be thrilled just to catch a glimpse of a rhino in the wild, and have no desire to bring back heads or horns to hang over a fireplace. Moreover, African countries increasingly are working to develop wildlife watching and ecotourism as sustainable industries that bring in much-needed income and create jobs in local communities.

In South Africa, for example, where millions of tourists visit annually in search of the "big five" animals -- elephant, rhino, buffalo, lion and leopard -- there are 14 locally-owned-and-controlled safari operations certified by Fair Trade in Tourism South Africa, an organization that promotes ethical travel practices. And while local safari entrepreneurs once offered fairly rustic accommodations, they're increasingly developing more comfortable bush camps and luxurious safari lodges, where wildlife watchers can relax and dine in comfort after a day of adventure [source: Van Wyk].

Today's safaris make great family vacations (provided that the kids are at least 8 or 9 years old, the minimum age allowed by most companies). There are a wide range of variations in accommodations, from the luxury lodges available in some national parks and game preserves, to temporary camps that some tour operators set up in the wild for safari-goers who don't mind roughing it. You can check out your options by perusing Web sites like My Safari Link, a recently-created portal and social networking site for various African safari operators.

Here's a taste of three types of safari lodging: