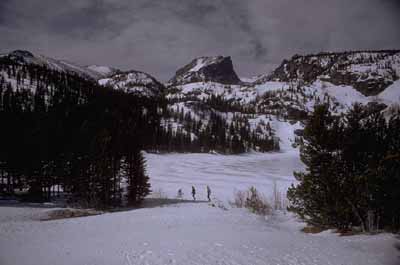 ©2006 National Park Services A mantle of newfallen snow blankets an alpine forest. Storm clouds blowing in from the west are stalled by the Rockies, causing much more precipitation to fall on the western slope than the eastern.

With more than 300 miles of backcountry trails, Rocky Mountain National Park is a favorite among hikers and backpackers. One of the best areas for hiking is Wild Basin, located in the extreme southeastern corner of the park near the town of Allenspark and directly north of the legendary Indian Peaks Wilderness Area. Popular trails in Wild Basin lead to such lovely high country lakes as Thunder Lake, Snowbank Lake, and Bluebird Lake.

High above Thunder Lake, on the little-traveled Boulder-Grand Pass (12,061 feet), is the lovely Lake of Many Winds, which remains frozen through much of July. Hikers in these alpine areas frequently observe Rocky Mountain bighorn sheep, elk, mule deer, and the occasional mountain goat, as well as golden eagles and ptarmigan.

Further north, in Glacier Gorge, hikers are treated to such spectacles as Hallet Peak, the Little Matterhorn, and Lake Odessa. All of these trails begin at Bear Lake, which is also a favorite among cross-country skiers and snowshoers during the winter months. Just down the road from Bear Lake is Moraine Park.

Another popular area -- some might call it the centerpiece of the park -- is Trail Ridge Road, which leads 20 miles over the high tundra along the Continental Divide, with views as far north as Wyoming on clear days.

Since all of Rocky Mountain National Park is truly breathtaking, it's hard to pinpoint just a few must-have photo ops. Here are some of the best:

©2006 National Park ServicesThe Fall River courses down the east slope of the Rockies near Aspenglen Campground. The park's mountain streams are inhabited by a variety of fish, including the endangered greenback cutthroat and introduced species such as rainbow and brook trout.

Climbing Longs PeakRising 14,255 feet, Longs Peak, a steep-sided mountain with a flat top, dominates the Front Range of the Colorado Rockies for almost 100 miles. Along with Pike's Peak to the south, it is one of the landmark peaks of the range and one of America's most distinctive mountains.

Some of the most difficult climbing routes in North America lead up the peak's eastern face, a 90-degree cliff that is more than 2,500-feet high. There are also walking routes to the summit.

The most popular of these is the Keyhole Route, which begins at the Longs Peak ranger station. The eight-mile trail climbs nearly 5,000 feet, or almost a mile up. At first it passes through a forest of windblown limber pines, then across a rugged boulder field above the timberline where the real work begins.

After scrambling through a notch called the Keyhole, hikers traverse a rock field then head up a steep granite slab, called the Homestretch, which leads to the summit. The top is surprisingly level. From here, on a clear day, the views of the peaks of Rocky Mountain National Park and the mountains beyond seem endless.

The natural history of Rocky Mountain National Park is quite amazing and varied. Learn more on the next page.