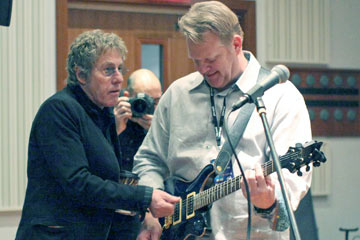 There's not a music lover among us who wouldn't dream of having The Who's Roger Daltrey give him pointers on guitar.
Photo by Jennifer Hammer, courtesy Rock 'n' Roll Fantasy Camp

We've all been there. At a party. In the shower. Vacuuming the rug. A song comes on the radio, or screams out of an iPod or video. It's not just any song, but THE song; the best song ever, or at least for that moment. You stop what you're doing. You break out the air guitar and make like Tom Cruise in "Risky Business."

It can't get any better. The stage is yours. Every note is melodious and on key. Hundreds, nay thousands of screaming fans want to be you. The bright lights are hot, but so is fame. You can handle it. You're Elvis in Hawaii; The Boss at the Meadowlands; the Go-Go's at The Paramount. Okay, maybe not the Go-Go's.

Whether you're strumming the classic intro to The Who's "Pinball Wizard," or wailing AC/DC's "Back in Black" into a faux microphone, there's not a music lover among us who didn't want to get on stage with their favorite rock group and play just one song.

Fourteen years ago, David Fishof, a one-time sports promoter turned music industry insider, wanted to make such rock 'n' roll dreams come true. So, Fishof, who has worked with the Monkees and Ringo Starr, created the Rock 'n' Roll Fantasy Camp so ordinary people could learn the ins and outs of writing and performing music from high-profile rock star counselors.

Fishof organized the first camp in Miami in 1997. He lost a ton of money, he says, but revived the idea five years later. Suddenly, people were signing up, hoping to check one thing off their Bucket List [source: Rohter].

Since that time, people have been spending up to $10,000 for five-day and night jam sessions with musicians including legendary Brian Wilson of The Beach Boys, Nick Mason of Pink Floyd, and Roger Daltrey of The Who [source: Peters]. The camp's motto is simple: "To bring musical fantasies to life." 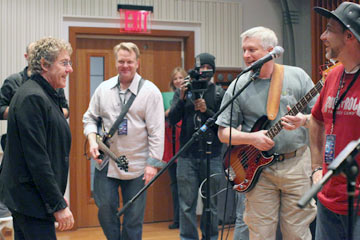 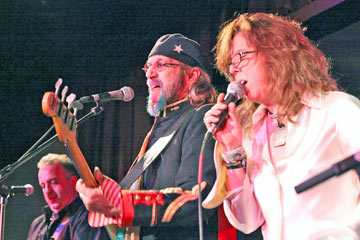 If I had a rock 'n' roll dream, and I do, it would be to play with Bruce Springsteen & the E Street Band in front of a packed Madison Square Garden. It could be any song, but I think I would like to jam with The Boss on "Badlands." Bruce, are you listening? As you once sang "is a dream a lie if it don't come true, or is it something worse."