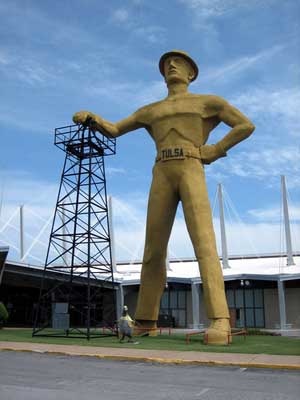 Originally erected in 1953 for the International Petroleum Exposition, the Golden Driller claims the title of world's largest freestanding statue -- 76 feet tall and 43,500 pounds.

The big guy was refurbished and relocated to its current home at the Tulsa Exposition Center in 1966, where it has since survived tornadoes, art critics, and even the occasional shotgun blast.

Next up: a fiberglass Neanderthal who draws visitors to Grants Pass, Oregon.