by Eric Peterson
Prev NEXT
9 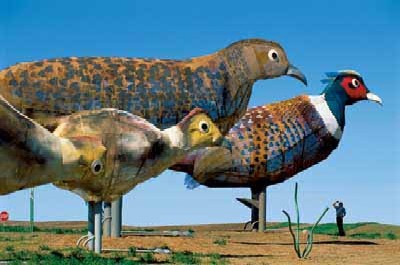 North Dakota's Enchanted Highway is one mans attempt at giving his agricultural-based town another way of surviving.
Publications International, Ltd.

The highest population density of huge roadside statues might well be North Dakota's Enchanted Highway, a 32-mile stretch of two-lane blacktop that runs between the towns of Gladstone and Regent in Hettinger County, North Dakota.

The statues are the handiwork of one Gary Greff, a self-taught sculptor and onetime schoolteacher and principal who feared that Regent would become a ghost town if its economy did not diversify beyond agriculture.

So what was Greff's solution to the problem? You've got it -- a colony of enormous sculptures on the side of the road.

Greff also runs the Enchanted Highway Gift Shop in Regent and plans to build several more oversize attractions before he hangs up his welding torch.

Tires and turtles -- a logical combination. Find out about them on the next page.­