by Eric Peterson
Prev NEXT
11 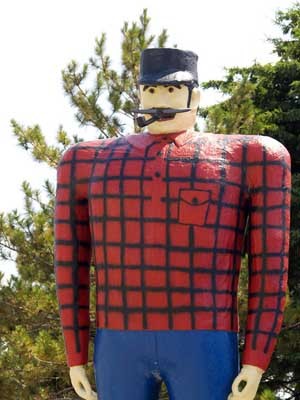 Paul Bunyan statues can be found from coast to coast. This one in Bemidji, Minnesota, is one of the most notable of the big lumberjack.
Publications International, Ltd.

Big Paul Bunyan might just be the mascot of the American road. Throughout the northern forests -- and almost every other corner of the country -- the hero of so many tall tales is immortalized as a gigantic statue, often accompanied by his sidekick, Babe the Blue Ox.

The giant lumberjack was said to be 80 pounds when five giant storks delivered him as a baby, and he grew so fast he was wearing his father's clothes within a week. He grew up on the coast of Maine but relocated with Babe to Minnesota.

Legend has it the young and rambunctious duo created the state's 10,000 lakes with their horseplay. Later, Paul went on to

invent the logging industry and chop down vast tracts of forest by himself.

The big fella is the subject of so many statues and woodcarvings it's impossible to tally them all. This one resides in Bemidji, Minnesota, while a few of the other notable ones can be found in Brainerd, Minnesota; Bangor, Maine; Klamath, California; and Ossineke, Michigan.

In the end, however, Paul Bunyan is the unofficial patron saint of clear-cutting and carries all of the political baggage that the title now entails.

Learn about Bunyan's statuesque gal pal on the next page.