Paranormal and other strange roadside attractions are a draw for tourists who love a good mystery. See more pictures of strange tourist attractions.
Publications International, Ltd.

The roadside is speckled with signs of these and other great mysteries of humankind: beacons that welcome aliens wit­h open arms, museums of the macabre, unnatural oddities and haunted places, and everything in between.

As a nation -- a species, even -- we are obsessed with what we can't explain and what we don't understand. The big question marks of civilization are not just enigmas -- they're big-time tourist traps.

Loch Ness without a monster is just another big murky lake, and Roswell without the UFOs is just another sleepy New Mexico town. With their respective ties to the unknown, however, these places draw visitors from every last corner of the planet.

But the phenomenon does not begin and end with these super-size mysteries. A tic, a personal obsession, or a unique outlook on life can be enough to spark a baffling roadside attraction.

Passersby will stop and look, rub their eyes, scratch their heads, and look again. Then they'll ask the one-word question: "Why?"

It's a pretty good question, but not one that is likely to be answered. The creators of the roadside equivalent of the unknown know what they're doing -- but they don't want anyone else to know.

Therein lies the beauty of the whole pursuit: Visitors leave the site more confused than when they arrived, after undergoing the polar opposite of a traditional educational experience.

But there's a value in exploring the flip side of academia; an anti-museum, or a roadside attraction so puzzling that one just can't fathom what its creator was thinking. And that's exactly what so many tourists are looking for in the Information Age: things that boggle the mind, not enrich it.

Around every corner of today's world there is new data, a greater understanding, or a technological breakthrough. In this context, it is quite refreshing to be without a clue.

Some things are just better off the way they are: mysterious, utterly bizarre, and impossible to explain. And if the truth really is out there, the best place to look for it is probably on the side of the road. In this article, you'll find many of these roadside mysteries, including:

Otherworldly Tourism: The Roadside as the Gateway to Outer Space

UFO tourism has become a big business all over the world. Roswell, New Mexico, struck the tourism equivalent of gold when the International UFO Museum and Research Center opened in 1992. What was once a sleepy agricultural hub became one of the top tourist meccas in New Mexico once aliens were pushed to the forefront of marketing efforts.

UFO tourism emerged as one of Roswell's top industries in 1997 (the 50th anniversary of the alleged alien crash near town), and the museum consistently draws hundreds of thousands of visitors a year. It's the centerpiece of the city's downtown and the natural starting point for an alien-related vacation of any kind.

Other dusty municipalities in the region (such as Socorro, Azteca, and Corona) took notice and magnified every extraterrestrial angle available.

Marfa, Texas, promoted its "Mystery Lights." Folks in Hooper, Colorado, built a UFO watchtower and started selling tickets and hamburgers. Nevada designated State Highway 375 the "Extraterrestrial Highway" in 1996. In 2002 the founder of the Roswell museum was inducted into the New Mexico Tourism Hall of Fame.

This otherworldly trend began around the time the alien craft allegedly crashed near Roswell (July 1947) and was going strong by the 1970s. Politicians in Bonnybridge, Scotland, proposed a sister-city relationship with Roswell, with the common denominator being UFOs.

An area in Peru was designated an official UFO tourism zone in 2002. As proof that the draw is still there for many tourists, just look to the KOA campground near Devils Tower, Wyoming, which still screens Close Encounters of the Third Kind every night.

We'll begin our journey into the paranormal with a look at The Thing? in Benson, Arizona, on the next page. 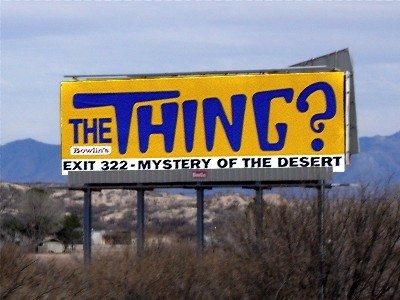 This billboard beckons travelers to find out just what The Thing? is. A store in Benson, Ariz., supposedly has the answer.
Publications International, Ltd.

Since 1965, for miles in either direction along I-10, billboards touting the mysterious "Thing?" barrage the road-tripper. What could it be?

Only those who stop at the curio store in Benson, Arizona, at exit 322 -- and pay the price of admission -- will know for sure, but rumor has it that the attraction does not quite live up to the memorable advertising.

Learn about rejuvenating "sound baths" at Integratron on the next page. 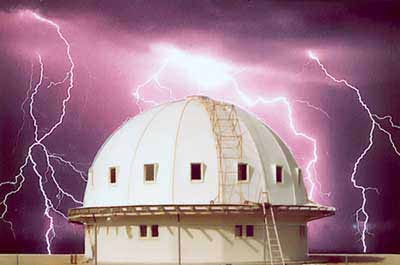 Built in 1978 on a "magnetic vortex", a sonic chamber within the Integratron provides the venue for "sound baths" that supposedly rejuvenate the recipient.

The visionary behind the Integratron, George Van Tassel, died before the domed structure near Joshua Tree National Park was completed. Its ability to lengthen life has never been tested, but it is open for tours (and sound baths) and rented out for special events.

Learn about Louisiana's most eccentric museum on the next page. 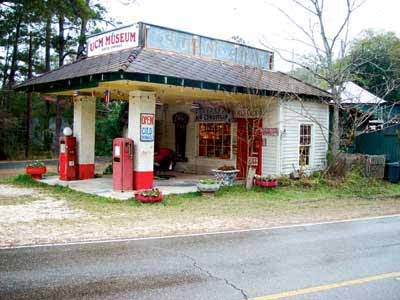 The UCM Museum in Abita Springs, Louisiana, has everything you could ever hope for if kitsch is what you seek.
Publications International, Ltd.

A labor of love for artist John Preble, the UCM Museum (pronounced "you-see-'em museum) is "Louisiana's most eccentric museum," and that is a serious understatement.

The consummate roadside attraction opened in 2000 and features everything from the "House of Shards," bejeweled with chunks of shattered pottery, to "Aliens Trashed Our Airstream Trailer," a mobil home impaled by a flying saucer.

Elsewhere, the museum houses Buford the Bassigator, a collection of pocket combs and paint-by-number masterworks, a shrine to Elvis, and a miniature river town.

See our final section for information on a UFO landing pad in Alberta, Canada. (No landings have been reported...yet.) 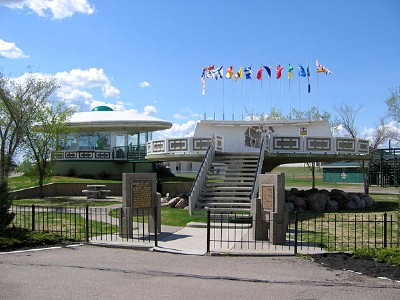