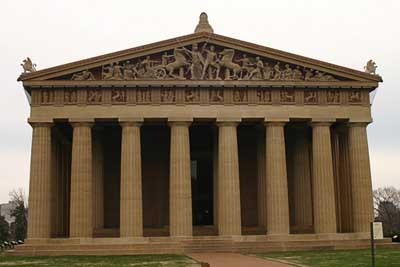 The Parthenon in Nashville was originally built for the Tennessee Centennial Exposition in 1897 and has been restored twice since then.
Publications International, Ltd.

This impressive edifice was flimsily built for the Tennessee Centennial Exposition in 1897. Restored in the 1920s and again in the 1990s, it is a reminder of the Music City's reputation as the Athens of the South.

Inside the majestic facade is a 42-foot-tall statue of Greek goddess Athena, said to be the largest indoor statue in the western hemisphere.

Find yet another replica, this one of Shakespeare's Globe Theatre, on the next page.