The History of the Redwood Forests 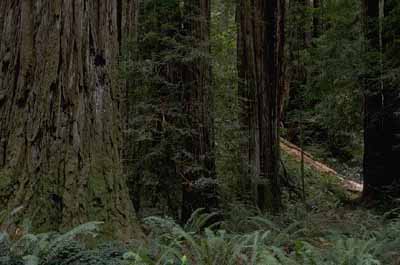 ©2006 National Park Services Ferns, rhododendrons, azaleas, salal, and other shrubs and flowers form a lush understory to the giant trees.

The history of the redwood forests is rich and ongoing. Scientists have only recently begun to understand the complex ecosystem of thes ancient redwood forests. The branches that form the canopy at the top of the redwoods eventually fall to earth, where they mix with leaves and branches from hemlock and other species and eventually decay. This process sustains a rich web of life. The trees on which some animals depend in turn depend upon other species of animals.

For example, a species of vole eats the fruiting bodies of fungi on dead logs, then excretes the spores on new sites. The spores grow new fungi that are necessary to carry nutrients and moisture to seedlings and tree roots. Owls, flying squirrels, pileated woodpeckers, and martens nest in dead trees and find food throughout the forest.

Inhabitants and Exploration of the Redwood Forests

In the late 19th and early 20th centuries, loggers pushed westward across the continent, cutting down mile after mile of the nation's primeval forests. Today, almost all of the old-growth forests are gone. The ancient trees that remain are found along the Pacific.

Unfortunately for these stately giants, the demand for lumber from redwoods has always been great because the wood resists shrinkage, rot, and decay. At the beginning of the 20th century, a league to save the redwoods was formed. When Redwood National Park was created in 1968, it incorporated three of these parks, Jedediah Smith, Del Norte Coast, and Prairie Creek, totaling 58,000 acres.

In 1978, Congress added 48,000 acres to the original acreage, including 39,000 acres that already had been logged. One park official described this area as looking like an "active war zone." Today, the clear-cut area is being reclaimed for redwood trees.

Take part in an otherworldly experience by visiting the forest giants at Redwood National Park. Whether driving through and stopping at the park's many lookout points or camping right underneath the amazing tree canopies, you'll create memories that will last a lifetime.