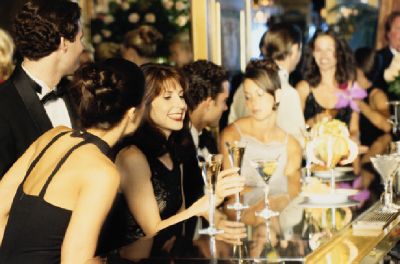 The nightlife scene in Portland is varied, from martini bars to brewpup-theaters.

Portland is a big jazz town, and you'll hear local musicians played on KMHD Radio at 89.1 FM and live at a smattering of jazz clubs around town. There are blues clubs and venues for rock as well.

Some people go out just for the bar scene, like the old Marathon Taverna (1735 W Burnside) and The Commodore Lounge (1601 SW Morrison St). There are martini bars, wine bars, and more craft breweries than in any other city on Earth. You can sip a craft beer and eat pizza while watching a movie at numerous brewpub-cinemas.

You'll find comedy clubs downtown, such as the popular Harvey's, clubs to whet your whistle and move your feet, and lots of old-fashioned movie houses, the kind that don't double as pubs.

Insider's Guide: The Best of Nightlife & Entertainment in Portland

Insider's Guide: The Best of Nightlife & Entertainment in Portland

At the Produce Row Cafe (204 SE Oak St, 503-232-8355) you can watch genius at work on Monday nights when the local jazz stars jam next to the bar. Order one of 200 bottled beers or 29 drafts while you tap your feet to great, improvised jazz.

Beer barons Mike and Brian McMenamin are known for their considerable talent for multitasking with beer. They opened one of the first brewpubs in town and now they operate brewpub-cinemas, brewpub-hotels, and brewpub-concert venues. They sell their own beer, wine, and distilled spirits.

©2006 Marcus Hildum After a late night out in Portland, stop at Voodoo Doughnut for a wild pastry concoction.

And for something different (really different), satisfy your hunger for a doughnut in the middle of the night by stopping

in at Voodoo Doughnut (22 SW 3rd Ave). It's open all night, drawing an eclectic crowd of doughnut lovers, who also stop by for the occasional musical performances on the ledge atop the restroom. The doughnuts, although bizarre with such ingredients as Tang and bacon or decorated with chocolate frosting and cereal, are surprisingly tasty.

You can also grab some laughs at Harvey's Comedy Club (436 NW 6th Ave), where there's standup Wednesday through Sunday, with open mike Thursday and Sunday nights.

At Aura (1022 W Burnside St), a hip and young restaurant and lounge, the action heats up on Saturday nights when a DJ's in the house and dancing starts at 11 pm.

While a walk in the woods is the epitome of relaxation for some, others prefer a massage or a good spot from which to people-watch. Portland offers those options and more. See the next section for suggestions.