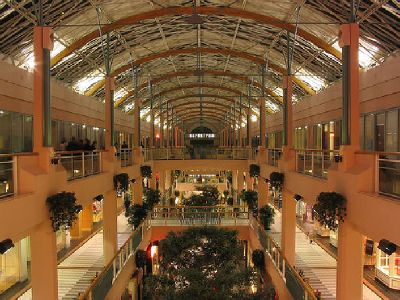 ©2006 Barry Mulling The Lloyd Center shopping mall offers an alternative to the funky items you'll find in the smaller boutiques that Portland is known for.

Portland shoppers are less into suburban malls and more into charming boutiques and shops. You'll find plenty of the latter in the Nob Hill District on Northwest 23rd Avenue (sometimes called Trendy Third) and 21st Avenue. Most shops are between Burnside and Lovejoy, though on 23rd Avenue there are fun shops and restaurants as far as Thurman Street.

The Pearl District (between about NW Ninth and 14th aves and Burnside and Lovejoy sts) is more for shoppers with big budgets, though there are lots of great shops with a range of prices.

In downtown Portland, Pioneer Place (between Third and Fifth aves and Morrison and Yamhill sts) is brimming with boutiques, restaurants, and a cinema.

Insider's Guide: The Best of Shopping in Portland

Although there are a few retail chains on Northwest 23rd Avenue, such as Pottery Barn and Williams-Sonoma Home, most of the shops are one-of-a-kind boutiques. Creative, individualistic entrepreneurs are encouraged to hang out their shingles along this street, so you'll see a number of hot new designers showing their wares in funky little shops. Be sure to check out Seaplane (827 NW 23rd Ave), Lena Medoyeff Studio (710 NW 23rd Ave) and The English Department (724 NW 23rd Ave).

If you are more interested in high-end shopping, Bridgeport Village (7405 SW Bridgeport Rd) is the place for you. This southwest suburban mall is kind of like Rodeo Drive with a parking garage.

Had enough funky and want something fine? Head south of Portland on Interstate 5 for some upscale, one-stop shopping. Look for Cole Haan, BCBG Max Azria, Anthropologie, Tommy Bahama, and others.

There's no shortage of nighttime entertainment for visitors to Portland -- whether you prefer live music, a comedy club, or a good ol' hole-the-wall bar. See the next page for suggestions on Portland's nightlife and entertainment.