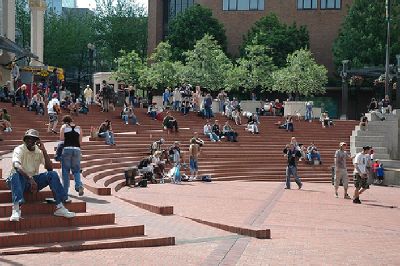 ©2006 Robert Britt Pioneer Courthouse Square is a great example of the beautiful public squares that were such a priority in the development of Portland.

There are 12 municipal fountains in southwest Portland alone. One of the most popular and inviting is the Salmon Springs Fountain, at the intersection of Waterfront Park and Southwest Salmon streets. A computer changes the pattern of the water jets' display every 20 minutes.

Probably the most significant of the fountains in terms of Portland history is the Skidmore Fountain, at Southwest First Avenue and Ankeny Street. Built in 1888, it bears the inscription that has become a motto for Portland: "Good citizens are the riches of a city."

Insider's Guide: The Best of Architecture & Landmarks in Portland

Pioneer Courthouse Square (between SW Broadway and Sixth Ave and Yamhill and Morrison sts), known to Portlanders as the city's "living room," is the heart of the city in more ways than one. It was built in 1984 after citizens helped pay for it by buying bricks with their names etched on them. Now it's the site for more than 300 events a year, such as concerts, festivals, political rallies, and the annual lighting of the Christmas tree.

The Pioneer Courthouse Square has a number of fun features. There's a fountain and the actual ornate, iron front gate of the Portland Hotel, which stood at that site from 1890 to 1951. There are several bronze chessboards at the northwest corner of the square, where numerous games are nearly always being played or challenged.

And there's the fabulous Weather Machine. Every day at noon it emits a trumpet fanfare and a spray of water, then displays either a sun (for good weather), a dragon (for bad), or a blue heron (for overcast skies).

Make sure to visit the Pioneer Courthouse (555 SW Yamhill St, 503-326-5830). Built in 1875, it's the oldest public building in Oregon. It was recently restored and reopened in December 2005 and now includes a visitor's center, with a film and historic information center. Best of all, you can climb to the cupola above the third floor and enjoy a splendid view of the city and Pioneer Courthouse Square.

©2006 Mary Harrsch The Pittock Mansion is a great piece of architecture in Portland, featuring some of the finest local materials and craftsmanship.

Governor Tom McCall Waterfront Park (SW Naito Pkwy from S Hawthorne Bridge to Burnside Bridge) features a riverside walkway that takes pedestrians and bicyclists through the Japanese-American Historical Plaza, a park built in remembrance of citizens who were interned during World War II. It's especially beautiful in spring when the 100 ornamental cherry trees are in bloom.

The walkway continues across the Steel Bridge to the Vera Katz Eastbank Esplanade (SE Water St and Hawthorne Blvd), a riverside (in some places actually floating on the river) walkway named after the former mayor who got it built. It's graced by four pieces of public art, including "Ghost Ship," a lantern in the shape of a ship that's lit at night.

High above the Uptown Shopping Center, where West Burnside Street takes off into the West Hills, you can

glimpse a stately mansion overlooking the city. If you follow the signs on Burnside to the Pittock Mansion (3229 NW Pittock Dr), you'll understand why Henry Pittock, who bought The Oregonian in 1860, chose this spot with its commanding view of the Willamette Valley for his French-style chateau.

Pittock hired the best of Oregon's craftspeople and used the finest local materials for his 1914 mansion, which included such modern marvels as central vacuuming and an intercom system. Guided or self-guided tours of the home and the 46-acre grounds are available, as well as various art exhibits and special events scheduled throughout the year.

If strolling in and out of charming boutiques is your idea of shopping, then you've come to the right place. Check out the next section for tips on Portland shopping.