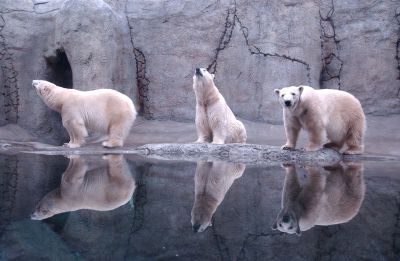 ©2006 Oregon Zoo/Michael Durham These polar bears are just a sampling of the wonderful wildlife found at the Oregon Zoo.

In a town known as the "City of Roses," it's no surprise that the biggest event of the year is the Portland Rose Festival. It's been celebrated each June since 1907, complete with the Queen of Rosaria and her court selected from local high schools, a Grand Floral Parade, and numerous events during the month.

Every weekend from March to Christmas Eve, the area near the west end of the Burnside Bridge takes on a festival air for the Portland Saturday Market (108 W Burnside), a local favorite since 1974 that, despite the name, is open Sundays, too. All 300 or so artisans make their own wares, ranging from funky candles to fine jewelry.

You may be surprised by the quality of the items for sale at the market. Each product has to be evaluated and deemed acceptable by a panel of judges before the artisans are allowed to offer it for sale, so come prepared. You may end up doing a lot of your holiday shopping here.

Check out sports venues like the Rose Quarter arena and PGE Park for basketball played by the Portland Trail Blazers and Triple-A baseball by the Portland Beavers. On the Fourth of July, the best place in town to watch fireworks is PGE Park after the last out at the Beavers game.

Insider's Guide: The Best of Special Events & Attractions in Portland

Portlanders always take out-of-town guests to the International Rose Test Garden in Washington Park (850 SW Rose Garden Way), but that doesn't mean they won't go there on their own. It's a beautiful garden with thousands of many-hued roses in more than 550 varieties.

The terraced gardens are in bloom from late May through September, providing a gorgeous backdrop to one of the best city views, looking east to snowy Mount Hood. And right next to the garden is an outdoor amphitheater, where occasional concerts, Shakespeare productions, and other events are held.

Another terrific view is from the Pittock Mansion (3229 NW Pittock Dr) built in 1914. Tour the mansion, admire the view, and if you're still full of energy, get on Forest Park's 30-mile Wildwood Trail (NW Skyline and Helens Rd), which passes behind the mansion, for a woodsy hike south to the Oregon Zoo (4001 SW Canyon Rd).

The zoo made its mark for conservation efforts, particularly for Asian elephants, but now has sprawling exhibits organized by environments, such as African Rainforest, Alaska Tundra, Eagle Canyon, and Cats of the Amur Region. Summer concerts and the Zoo Railway add to the zoo's popularity.

The results of Portland's wonderful relationships with its sister cities (Sapporo, Japan, and Suzhou, China) is an authentic and beautiful Japanese Garden (611 W Kingston Ave) on the other side of the tennis courts from the rose garden in Washington Park. The Portland Classical Chinese Garden (127 NW 3rd Ave) forms a peaceful, block-long, urban oasis in the heart of Portland's Old Town.

The colorful Cinco de Mayo Fiesta every May in Waterfront Park features a delegation of performers and artists from Portland's sister city of Guadalajara.

Governor Tom McCall Waterfront Park (SW Naito Parkway from south Hawthorne Bridge to Burnside Bridge) is the perfect venue for many festivals and events. At the annual Waterfront Blues Festival, held every Fourth of July weekend, boat owners get the best seat in the house, bobbing on the river while listening to the blues bands onstage. Plenty of people show up on foot for the great vibes, too.

One of the nation's biggest beer festivals is held in Waterfront Park the last weekend of July. The Oregon Brewers Festival features craft beers from 72 North American breweries. You get an official tasting mug with admission.

For book lovers, Powell's City of Books (1005 W Burnside) may be their main destination in Portland. Powell's is one of the largest bookstores in the country, with new and used books side by side on the shelves. There's also a rare book room, a coffee shop, and author readings scheduled nearly every evening. Big-name authors tend to request a stop at Powell's because they know they'll get a big and enthusiastic audience for their readings.

Enjoy concerts and sports at the 13,000-seat Rose Quarter (One Center Court) and horse racing from October to May at Portland Meadows (1001 N. Schmeer Rd).

From street fairs to operas, Portland has the arts and culture scene covered. Go to the next page to learn about the best the city has to offer on this front.