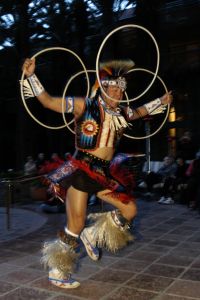 ©2006 Greater Phoenix Convention and Visitors Bureau Hoop dancing is just one of the many traditional forms of entertainment you may find in the Phoenix area.

As with any other large metropolitan area, there are lots of trendy upscale clubs and eateries that come and go with predictable regularity: a good many of them in the suburban shopping areas within traditional shopping malls. Naturally, all of the resorts cater to nightlife with lively piano bars, entertainment, and dancing.

There's a great deal of nighttime activity in downtown Tempe, especially along the Mill Avenue corridor, as the ASU students are an active and energetic group. Meanwhile, clubs like Cajun House in downtown Scottsdale are widely known and popular with trendy socialites and celebrities.

North of Phoenix in Cave Creek you can still get a feel for the real west at the Buffalo Chip Saloon and Harold's Corral, where you might see a horse tied up next to a Mercedes in the parking lot.

In the Pinnacle Peak area, Greasewood Flats is the ultimate outdoor burger joint. But get to Greasewood fast, for it soon may be gone to make way for more expensive homes turning up in this quaint area.

The Best of Nightlife & Entertainment in Phoenix

The Rhythm Room (1019 E Indian School Rd) is a local hangout for great jazz and blues in a small, low-key, unassuming setting. It's not in the best neighborhood -- but it's safe to walk to your car; just keep it locked and don't leave valuables in plain sight. No food -- just drinks and good sounds with a small dance floor.

Alice Cooper is alive and well in Phoenix and oft makes appearances at his downtown haunt, Alice Cooper's Town (101 E Jackson St). There's a beer garden and lots of good barbequed eats. This is one of the most happening places in downtown Phoenix and just three blocks from Chase Field.

Wi-Fi, billiards, lots of flat-screen TVs, and creative dishes by one of Phoenix's premier chefs, Eddie Matney, are the stars at Stoudemire's Downtown (3 S 2nd St). Just a few steps from the U.S. Airways Center (formerly America West Arena), this is the kind of place that is helping Phoenix "rise from the ashes" once again.

Relaxation has been taken to a new level in Phoenix, where resort spas offer dozens of rejuvenating treatments and golf courses beckon at every turn. Learn more about relaxing and unwinding in Phoenix on the next page.