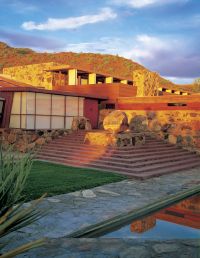 If you're expecting to find Phoenix filled with early western homes and architecture, you're in for a disappointment. Phoenix and The Valley don't boast early western territorial architecture, nor do they have rows and rows of Civil War-era brick homes, since the city virtually grew from nothing as the American Civil War was taking place.

As matter of fact, one of the earliest existing homes is the Rosson House, built in 1895. It's now a museum depicting life in the early days of the community. It's situated in the heart of downtown in Heritage Square at 6th Street and Monroe. The park offers other examples of structures from the original town site.

Insider's Guide: The Best of Architecture & Landmarks in Phoenix

Insider's Guide: The Best of Architecture & Landmarks in Phoenix

As its name implies, South Mountain lies at the southern boundary of The Valley. South Mountain Park, the world's largest city park, has a piece of truly happenstance architecture known as Mystery Castle (800 E Mineral Rd, 602-268-1581). At the foot of the mountain, this curious structure was built by Boyce Gulley, who created his "castle" from rocks, debris, and curious artifacts found in the nearby desert. Gulley left his family and came to the desert seeking a cure for his tuberculosis. Before setting out, as the story goes, he promised to build his young daughter, Mary Lou, a castle.

His completed castle consists of 18 rooms, 13 fireplaces, a grotto tavern downstairs, and a true "rollaway bed" framed by a mining cart. When the Castle is open Thursdays through Sundays from October to mid-June, Mary Lou conducts the tours personally.

Located in the heart of downtown, Chase Field (formerly Bank One Ballpark), home of Major League Baseball's Arizona Diamondbacks, is a significant structure that dominates the skyline. From far out in the suburbs, it's easy to see if the mighty retractable roof is open or closed to the heat and elements. Tours are available, highlighting many of the one-of-a-kind amenities included in this modern ballpark.

On Central Avenue, the most significant contemporary architecture in downtown Phoenix is undoubtedly the Burton Barr Central Library (1221 N Central Ave) designed by Will Bruder. The copper exterior is perfectly suited for Arizona, one of the world's leading copper-producing areas.

Glass walls, mirrors, and skylights create magical lighting effects within the Crystal Canyon, a five-story glass atrium. The largest reading room in North America is located on the top floor and is covered by a cable-suspended steel ceiling.

Otherwise, each community offers its own architectural style, depicting the era of its primary development. As land values have skyrocketed, many of the post-war homes in prestigious sections of North Phoenix and Scottsdale have already been demolished for large contemporary housing construction. If time allows, drive north on Central Avenue and take a few minutes to wander off a few blocks to some of the pleasant communities north of the downtown area.

The site, a National Historic Landmark, is open to the public for a variety of guided tours. The home, studio, grounds, and gift shop are a very popular stop with visitors.

The famous Mobil Three-Star Arizona Biltmore Resort and Spa (2400 E Missouri Ave) is located just north of the Camelback Corridor in Phoenix. Often mistakenly credited to Wright himself, the Biltmore was actually designed by his colleague, Albert Chase McArthur. Nonetheless, the Wright influence is strong, and the hotel certainly is one of Phoenix's architectural highlights.

If you visit the hotel, be certain to look up the hill to another well-known landmark in Phoenix, the Wrigley Mansion (2501 E Telawa Trail), the former home of the chewing gum magnate.

East of Phoenix in Apache Junction are two unique sites that link Phoenix to one of America's greatest mysteries, the legend of the Lost Dutchman Mine. Somewhere in the vast 160,000 acres of Superstition Mountain Wilderness is hidden an unclaimed treasure that has eluded "Dutch Hunters" for more than a century.

The Goldfield Ghost Town (1 N Highway 88) on Mammoth Mine Road has been rebuilt on the site of a rich gold strike in 1892. The town reached a population of nearly 4,000 residents almost overnight and then dried up when the mines flooded. Today, a renewed effort is under way to pump the mines dry and continue the quest.

On Highway 88, those interested in the legends and lore of the Lost Dutchman head right for the source of the best information available, the Superstition Mountain Museum (4087 N Apache Trail, Apache Junction). Located in the very shadow of Superstition Mountain, the museum offers artifacts from the mines that once bore vast amounts of gold and loads of memorabilia from the era.

North of the city on Interstate 17 is the Deer Valley Rock Art Center. Contrary to what its name implies, it is not a shrine to modern musicians but a concentration of some 1,500 petroglyphs (rock art paintings) left behind by the ancient cultures that lived here during the past 1,000 or so years. The 1/4-mile path offers a great insight to the past and people of this region. If you have youngsters in your group, they'll love this tour stop and the next.

The Pioneer Living History Museum (3901 W Pioneer Rd) is located just a few miles further north on Interstate 17. Here, you can stroll among a collection of more than two dozen original and reconstructed buildings from throughout the Arizona Territory.

There's an old bank, schoolhouse, opera house, print shop, and blacksmith shop. Arizona was the last of the 48 original contiguous states to join the United States, and in some respects, there is a sense that it's still a territory -- part of the old Wild West.

Shopping is an adventure unto itself in Phoenix. Check out the next section for tips on where to find some of the best shops and specialty boutiques.