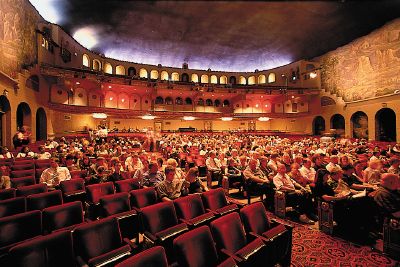 ©2006 Greater Phoenix Convention and Visitors Bureau and Orpheum Theater It took 12 years to restore the Orpheum Theatre back to its glory, but it was worth it! Today, you can catch live ballet, concerts, and more at the theatre.

In the 1950s, Phoenix was known for the state's four Cs: copper, cattle, cotton, and climate, with a rough and tumble "cowboy" bar thrown into the mix.

Today, due to The Valley's rapid growth, new art and culture venues are increasing as fast as the population. There are opera, ballet, theater, and a world-class symphony. Museums abound, and the art district in Scottsdale is one of the best Western American art markets in the country, on a parallel with Santa Fe, New Mexico, and Jackson, Wyoming. Interestingly enough, one of the oldest art venues in The Valley also is one of the best -- the Heard Museum.

Insider's Guide: The Best of Arts & Culture in Phoenix

The Heard Museum (2301 N Central Ave) houses one of the most impressive collections of Southwestern art in the world. Exhibits include rooms filled with pottery, katsinas (a carved doll in the costume of a particular Hopi spirit), textiles, jewelry, and art. There's even a Navajo hogan and an Apache wickie-up (a Native American structure, much like a lean-to, made from leaves, twigs, and branches covered with animal hides) on display.

The museum hosts annual events including the World Championship Hoop Dance Contest and the Guild Indian Fair & Market. The Heard's gift shop is a wonderful place to browse and to find authentic, high-quality Native American art, pottery, and jewelry.

Phoenix Art Museum (1625 N Central Ave) is best known for its Western American Collection, which includes sculptures by Frederic Remington and paintings by Georgia O'Keefe. There's usually something special going on, since the museum hosts more than 25 significant exhibits annually.

Phoenix Museum of History (Heritage and Science Park, 105 N 5th St) features exhibits from the 1860s (when the first Anglo settlements began here) through the 1930s.

You can travel through the human body, pilot a simulated airplane flight, and take part in hundreds of hands-on exhibits at the Arizona Science Center (600 E Washington St).

Thank goodness Phoenix renovated the Orpheum Theatre (203 W Adams St), a 1929 movie palace. After 12 years of restorative work, the Orpheum is a venue for live ballet, concerts, and lectures. Guided tours of this jewel box are free, but you must make reservations by calling 602-262-7272.

Just down the street the Herberger Theatre (222 E Monroe St) is a two-stage house that features Broadway plays, ballet, and popular theatre.

The Herberger College Performing Arts Department at Arizona State University is one of the best-kept secrets in town. During the school year, ASU has some type of performance nearly every night of the week, many of which are free. From opera, to recitals, to big band, to theatre, to dance -- ASU has a superb music and performing arts college on the level of professionalism you'd expect to see on Broadway, but without the sting to your wallet.

The Scottsdale galleries host a weekly ArtWalk open house each Thursday evening from 7 to 9 pm. The downtown Phoenix galleries host a similar Artlink on the first Friday of each month from 6 to 10 pm. Don't be too disappointed if you miss these events: There's plenty of gallery gazing and grazing going on every day of the week.

While Phoenix isn't the place for early Western relics, you can enjoy some unique architecture and landmarks, including Frank Lloyd Wright's Taliesin West. Learn more in the next section.