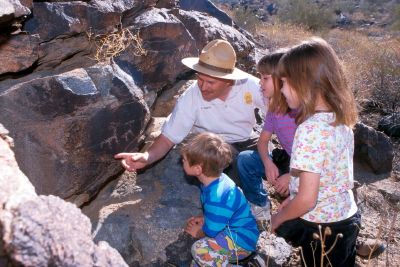 There's no end to what you can do and see in The Valley of the Sun. Because there's so much sunshine and so little rain, many activities take place outdoors year-round.

Come spring, visitors flock to the area to see the Cactus League: Major League Baseball spring training. In cooler months, The Valley is a mecca for golfers, hikers, horseback riders, and tennis players.

There's always a festival, art show, or concert happening, and Phoenix's cultural offerings and performing art groups are superb. The Heard Museum, Desert Botanical Garden, and Phoenix Zoo each have won international acclaim, while Old Town Scottsdale hosts incredible shopping and one of the hottest art markets in the country.

Add to this the Grand Canyon, Lake Powell, Native American reservations, and winter ski areas, all of which are only a few hours from downtown Phoenix.

Insider's Guide: The Best of Special Events & Attractions in Phoenix

For baseball fans, there's no better place than The Valley of the Sun. Baseball has become nearly a year-round activity beginning with spring training for the Cactus League in late February and continuing through the Arizona Fall League championships in mid-November.

The Cactus League consists of 12 major league teams (nine in The Valley and three in Tucson). Tickets are reasonable, around $8 for bleacher seats to $15 for reserved seats. The stadiums are more intimate than big-league parks, and often players will come up to the stands to sign autographs for fans. Tickets for some teams go on sale as early as December.

Boating on the desert? You betcha! Tempe Town Lake (80 W Rio Salado Parkway) offers a variety of water activities. Anglers will especially appreciate the stocked trout, and kids will enjoy the Splash Playground. You can rent a boat, take paddle classes, attend live concerts, and walk the trails around the perimeter of the lake. There's even a sunset boat ride that includes food, drinks, and music.

South Mountain Park (10919 S Central Ave, south of Dobbins Road) is considered the world's largest city park, with more than 16,000 acres. This amazing urban wilderness park offers picnic areas as well as miles of trails for horseback riding, hiking, and mountain biking. There's an environmental center with displays detailing the history of the park and the ancient Hohokam peoples who once lived here.

Keep your eyes open for lizards, rabbits, and many western birds that frequent the area, as well as rattlesnakes that are most active in springtime. This is a wonderful spot to view a Valley sunset and discover ancient petroglyphs (rock art paintings) created by the Hohokam.

Smack dab in the middle of Phoenix next to the Hohokam Expressway sits the Pueblo Grande Museum and Archaeological Park (4619 E Washington St). This is Phoenix's only national landmark and the site of a Hohokam Village, where more than 1,000 people lived until 1450 A.D. There are galleries where kids of all ages can enjoy hands-on exhibits and a 1/2-mile ruin trail where you can observe storage rooms, cemeteries, and even an ancient ball court.

Nearby community Tempe is the home to Arizona State University (University Drive and Mill Avenue) a 750-acre campus and the largest university in the Southwest. The ASU Visitor Information Center (826 Apache Blvd at Rural Road) has maps of a self-guided walking tour.

There is public art and innovative architecture throughout the campus, including ASU Sun Devil Stadium, the ASU Art Museum, and Grady Gammage Performing Arts Auditorium, which is the last public structure completed by architect Frank Lloyd Wright.

It's hard to believe there are so many varieties of cacti, but you'll see them all at the Desert Botanical Garden (Papago Park, 1201 N Galvin Parkway). This site contains 150 acres of more than 4,000 different species of cacti, trees, flowers, and succulents as well as a butterfly pavilion.

The gardens opened in 1939 to showcase desert ecology and have grown to be one of Phoenix's premier tourist attractions. A stroll through this lovely place is a wonderful respite from the hustle and bustle of the big city.

Papago Park (625 N Galvin Parkway) is an urban park with red craggy hills, lagoons, and streams. There's plenty of hiking here, and you can climb to Hole-in-the-Rock, a natural observatory used by the Hohokam to devise a calendar system.

Phoenix Greyhound Park (3801 E Washington St) offers betting on live greyhound racing seven nights a week beginning at 7:30 pm and wagering on simulcasts from racetracks across the country beginning daily at 4:30 pm. Pari-mutuel betting is allowed, which means you bet among others and not against the house. The clubhouse features a second-floor viewing and concessions area, where you can watch races on individual monitors at most tables.

Thoroughbred horse racing is allowed at Turf Paradise (1501 W Bell Rd), which is about 18 miles north of the Sky Harbor International Airport. Generally, live horse races are held every day except Wednesday and Thursday.

The arts and culture scene in Phoenix is quite impressive. See the next section for information on the Heard Museum, the Orpheum Theatre, and more.