Getting In, Getting Around Phoenix 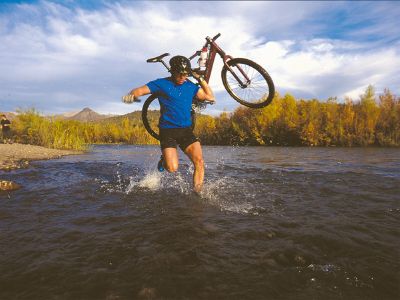 ©2006 Greater Phoenix Convention and Visitors Bureau This man is traversing a Phoenix park by bike and on foot. The city's suburbs and surrounding parks are popular destinations for cyclists.

Navigating Phoenix is quite manageable, whether you decide to rent a car or take advantage of such public transportation options as DASH. The following are tips on getting to and from the airport, as well as on getting around Phoenix when you're ready to explore.

As the world's eighth busiest airport, Phoenix Sky Harbor International is a busy place around the clock, accommodating more than 555,000 take-offs and landings each year.

Rental car: Unless you're visiting only downtown Phoenix or attending a conference or convention, it's almost imperative to have a car, whether it's your own or a rental. The rental car facility is at an off-site location and accommodates all airport rental car companies, their rental counters, and vehicles.

Public transportation: From Sky Harbor Airport, courtesy shuttles are provided to most of the resorts and Phoenix hotels. There are a number of ground transportation companies that provide shuttle service from the airport to other Arizona cities.

Red Line and No. 13 buses provide transportation to and from the airport. You can pick up a copy of the Bus Book at the information desk in any terminal. A bus Trip Planner feature online will provide timetables and allow you to map your own itinerary. A typical bus fare is about $1.25.

When complete in 2008, the light rail system will link the airport with downtown Phoenix, Tempe, and Mesa.

Fees are $5 for the first mile and $2 for each additional mile as well as a $1 airport surcharge. There's a $16 minimum fare and no extra charges for more than one in the party or for baggage. Travelers should be advised that cab fare from Sky Harbor to an outlying hotel might often exceed the cost of a daily car rental.

Rush hour: Rush hours tend to be between 7 to 9 am and 4 to 6:30 pm. Because of the summer heat, many construction workers begin before daylight. So, summer rush hours tend to be 11/2 to 2 hours earlier than in other metropolitan areas. With most workers commuting from outside the city, traffic into the heart of Phoenix can become very heavy in the early morning hours. Outbound traffic most days begins to get heavy around 4 pm.

Rules of the road: Sometimes there seems to be no rules, so drive defensively! Drivers here often speed, tailgate, and seem to forget about using turn signals. Be especially defensive for speeders on the Loop 101 and 202 expressways and on AZ 51. The 7.8-mile stretch of Loop 101 between Scottsdale Road and Shea Boulevard is particularly notorious for drivers exceeding 100 mph and photo radar has been installed to nab these reckless individuals.

On surface streets, yellow lights tend to be timed shorter than in other cities. Be ever alert for drivers slipping through a light that has just turned red!

In several communities, cameras are mounted on utility poles to photograph red light runners, and photo radar is commonly used by police in inconspicuous roadside vans hidden in the shrubs and low foliage; fines are stiff, and excuses are rarely accepted.

Public transportation, fares: The main Valley Metro Bus Station (302 N Central Ave) is located in downtown Phoenix on the north side of Van Buren Street between 1st Avenue and Central Avenue. From here, bus service is provided in and around downtown Phoenix and to the surrounding suburbs. Fares are generally $1.25, or for $3.60, you can obtain an all-day pass.

The free Downtown Area Shuttle (DASH) is a great way to explore downtown Phoenix, so look for the copper-colored DASH buses. A bus comes every six minutes at any of the DASH stops that are marked by special signs.

Taxis, on foot, or by bike: Taxi fees are unregulated in Phoenix, except at the airport. The area is so large that one-way fares can be very expensive. It's best to ask about fares before you get into the cab. Often, it's cheaper to rent a car.

You'll see very few bikes on the streets in Phoenix since there are few bike lanes. But, you'll see lots of riders in the surrounding mountain parks, on greenbelts, and in suburban trails doing long distance riding on weekends. Because Phoenix is so spread out, walking is realistic only if you are staying at a resort or in a specific area. If you decide to walk to any destination no matter how short, make sure to take a supply of water with you as a precaution.

While the special events and attractions in Phoenix are varied, one thing's for sure: Most of the best activities allow you to enjoy the beautiful weather. The next section offers tips on which attractions you won't want to miss during your visit.