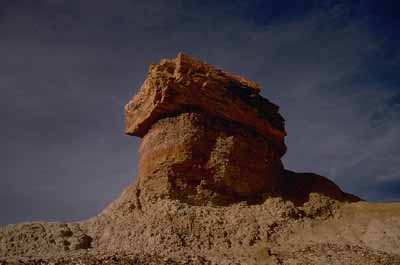 ©2006 National Park ServiceThis pedestal petrified log in the Blue Mesa rests high above even more trees that lived over 200 millions years ago.

The best way to enjoy and experience Petrified Forest National Park is on foot. Maintained trails range in length from less than a half-mile to almost three miles. You can also opt to meander the trails on bicycle or horseback and with or without a guided tour.

The southern section of the park contains one of the world's largest concentrations of petrified wood. Here, great logs of jasper and agate are interspersed with smaller pieces and fragments glistening in the sun like immense jewels.

The northern part of the park encompasses the colorful mesas and buttes of the Painted Desert, where sun, sand, and rock create a dazzling range of color and pattern.

The park also includes a number of early pit houses and pueblo ruins, which are up to 1,000 years old. The high desert prairie region of the park is known for its antelopes, coyotes, golden eagles, western meadowlarks, roadrunners, and white-tailed prairie dogs.

The Petrified Forest attracts landscape photographers and fine artists from around the world. Get some incredible pictures for your family album by visiting the following scenic areas:

Exploring the Woods Time ForgotThe Petrified Forest is more than large mineralized trees. It opens a window on an environment that is more than 225 million years old.

Visitors who walk one of the park's hiking trails get a real sense of this forgotten age. It's easy to imagine a marshy wetland where leather-winged pterosaurs soared above rivers filled with giant amphibians, and dinosaurs foraged for food on the banks.

Long Logs Trail, another walking loop, goes to the park's largest concentration of petrified logs. Some of the logs are more than 100 feet long; all are piled in a great logjam.

Other trails lead deeper into the park, giving visitors an even firmer grasp of the past.

It's hard to even imagine how all these incredible natural formations were created. We provide this information in the following section.